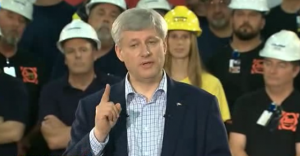 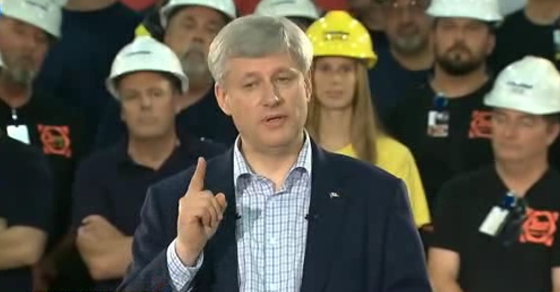 Manufacturing jobs down again, but Harper claims the “economy is healthy and growing”

Canada's new job numbers throw a wrench in Conservative leader Stephen Harper's story that aside from the oil and gas sector, the rest of the economy is firing on all cylinders.

Canada’s new job numbers throw a wrench in Conservative leader Stephen Harper’s story that aside from the oil and gas sector, the rest of the economy is firing on all cylinders.

“I’ve been very clear,” Harper said in August. “Eighty per cent of the Canadian economy is healthy and growing,” but adding “we have a contraction in the energy sector that everybody knows is because of low oil prices.”

The Canadian Press called that “a lot of baloney,” but this week Conservative candidate Jason Kenney doubled-down describing Canada’s economic troubles as nothing more than a “discrete sectoral downturn.” Yet August’s Labour Force Survey released Friday by Statistics Canada shows job losses in sectors beyond natural resources, notably with the continued decline in manufacturing jobs for the third month in a row.

Manufacturing has now posted job losses in two of three months of the third quarter of 2015, not a promising sign as Canada struggles to lift itself out of recession.

Other industries that saw job losses in August include construction; utilities; transportation and warehousing; information, culture and recreation; as well as professional, scientific and technical services.

Overall, Canada created a total of 12,000 jobs in August, mostly in education and public administration, although that wasn’t enough to keep pace with the number of people looking for work, with unemployment ticking up to 7% and the employment rate remaining static.

Since the 2008 recession, manufacturing as a share of GDP has fallen from 14.8% to 10.6%. In February, Canadian manufacturing jobs plummeted to their second lowest level since 1976 and has remained flat since.

Friday’s job numbers show Canada has racked up a net-loss of 412,600 manufacturing jobs since Harper assumed office in February 2006.