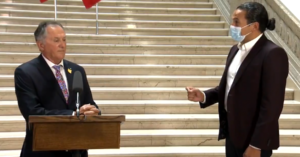 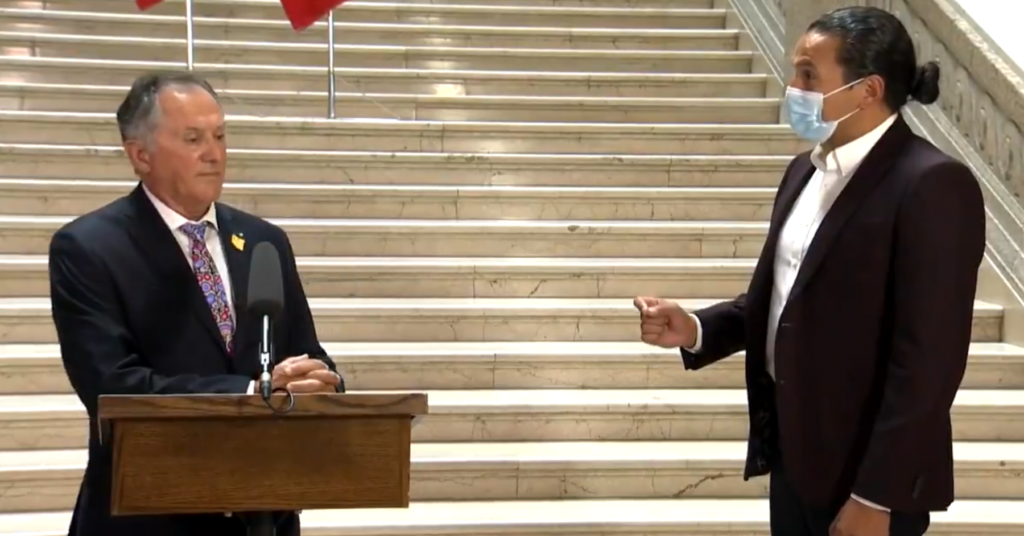 Manitoba’s Progressive Conservatives are backpedaling after attacking the leader of the opposition NDP over an exchange with their Indigenous reconciliation minister over residential schools.

Alan Lagimodiere, the PC’s newly appointed Minister of Indigenous Reconciliation and Northern Relations, suggested residential schools were designed with good intentions during a press conference Thursday at the Manitoba Legislature.

“The residential school system was designed to take Indigenous children and give them the skills and the abilities they would need to fit into society as it moved forward,” Lagimodiere told reporters.

In a dramatic exchange, NDP leader Wab Kinew interrupted the press conference, explaining that as an honorary witness in the Truth and Reconciliation Commission, it was his duty to correct the new minister.

“I’ve listened to the stories of the survivors,” Kinew told Lagimodiere.

Lagimodiere backtracked and said he “misspoke” in his comments.

Following the exchange, the Manitoba PC Caucus tweeted a statement accusing Kinew of attempting to “bully a minister” and claiming his “showmanship” does “nothing to advance … reconciliation.”

“We are all committed to meaningful  progress on reconciliation. The political showmanship of storming into someone else’s press conference to bully a minister who was sworn in only 10 minutes earlier does nothing to advance that reconciliation.”

Less than an hour after issuing the statement, the Manitoba PCs deleted the tweet without any explanation. 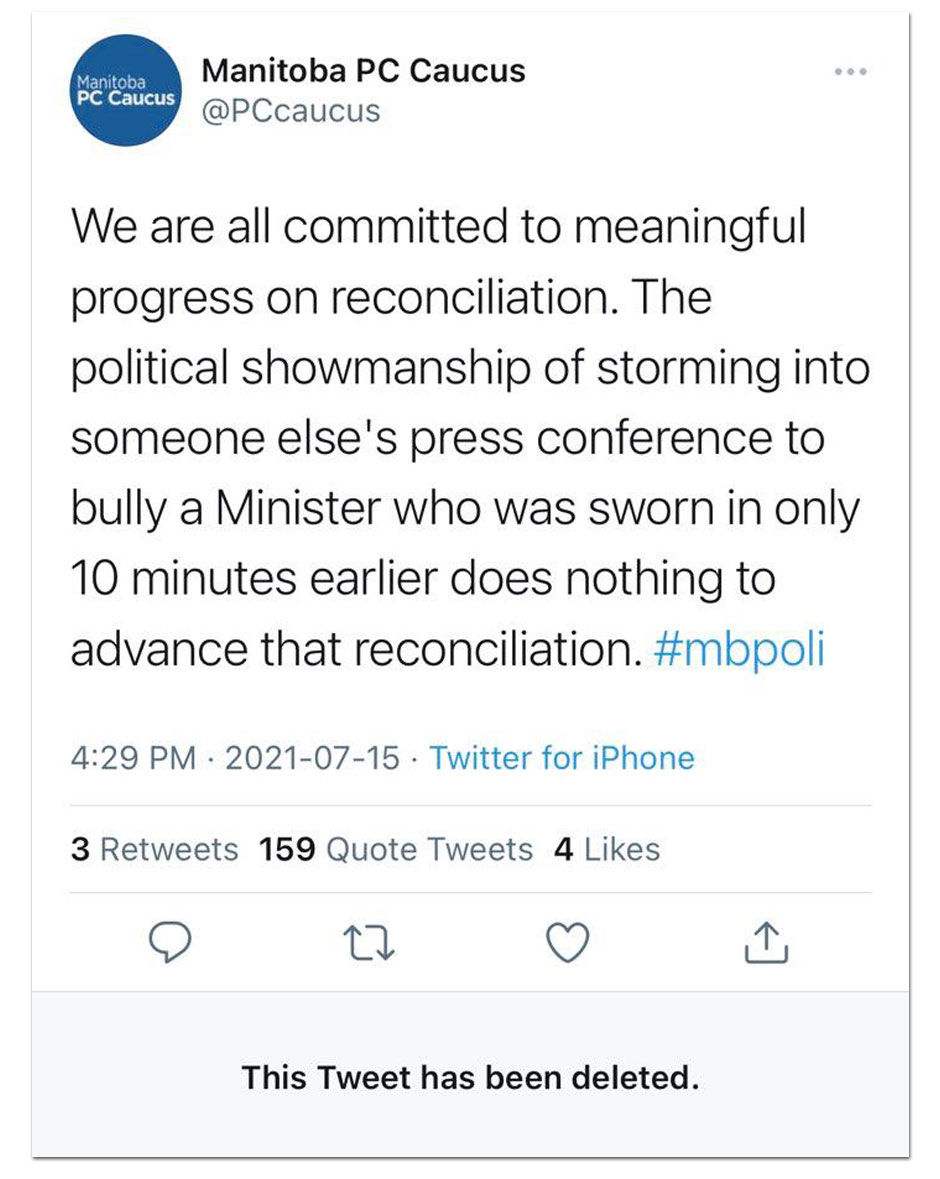 In response, the Assembly of Manitoba Chiefs issued a statement from Grand Chief Arlen Dumas along with a screenshot of the deleted Manitoba PC tweet: “It is unacceptable to continually disparage First Nations in the most hurtful ways during these times of grieving and suffering over the (residential school) system and the graves of our children.”

“I stand with Wab Kinew in calling out residential school denialism.”

“It is unacceptable to continually disparage First Nations in the most hurtful ways during these times of grieving and suffering over the IRS system and the graves of our children. I stand with @WabKinew in calling out residential school denialism.”
~GC Dumas pic.twitter.com/bNeR3k9B5d

The Manitoba PC’s statement was tweeted hours after Lagimodiere himself had tweeted a statement acknowledging his earlier statements about residential schools were wrong.

“An an Indigenous Manitoban, I sincerely believe that residential schools were tragic and were designed to assimilate Indigenous children and eradicate Indigenous culture,” Lagimodiere tweeted.

“That was wrong then, and it is wrong now.”

Please see my statement below. pic.twitter.com/tNzE5bSM6U

Lagimodiere was appointed to the position after Eileen Clark, the former Minister of Indigenous Reconciliation and Northern Relations stepped down last week following Premier Brian Pallister’s comments about colonization.

After Clark’s resignation, Pallister stated he still “stands by” his comments.

The Manitoba PC Caucus did not immediately respond to requests for comments from PressProgress.