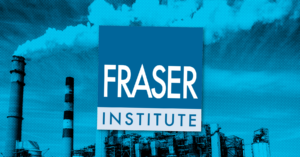 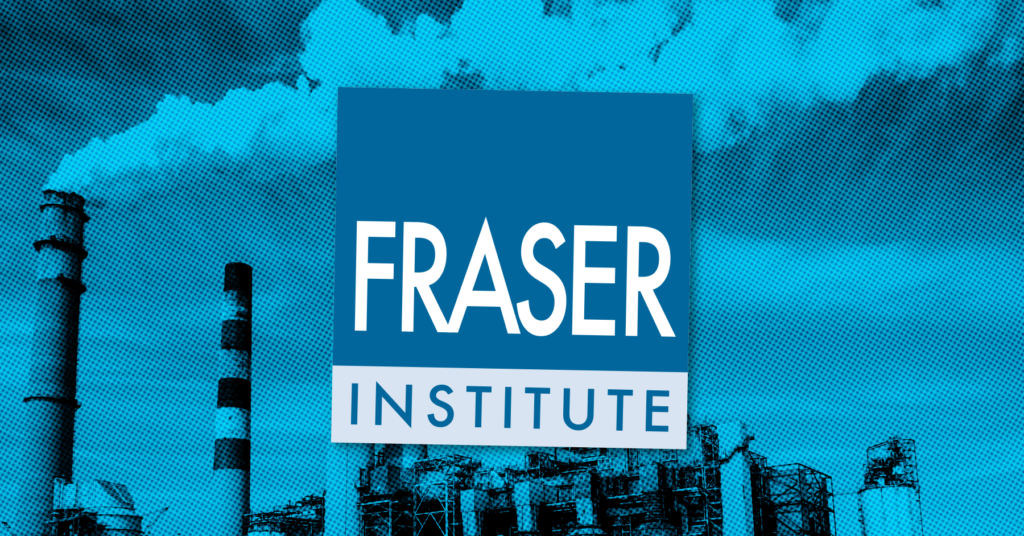 One of BC’s major newspaper chain is uncritically repeating misleading claims from a right-wing think tank even though policy experts say the report lacks “credibility.”

In a report published this week, the Fraser Institute claimed that increasing the federal carbon tax to $170 per tonne by 2030 will cause a 2.1% drop in national GDP and result in more than 200,00 Canadian jobs being lost.

One of the Fraser Institute report’s authors, Ross McKitrick, sits on the advisory council of a climate science denying charity called “The Global Warming Policy Foundation,” and has a long record of making statements rejecting the scientific consensus on global warming.

McKitrick’s name also once appeared on an evangelical declaration  claiming “global warming is one of many natural cycles of warming and cooling in geologic history” and is part of “God’s intelligent design and infinite power.”

The report’s claim was repeated by Victoria News columnist Tom Fletcher, who cited the report to suggest the tax will cost “more than 20,000 jobs” in BC. The story was reprinted in several local newspapers owned by Black Press. 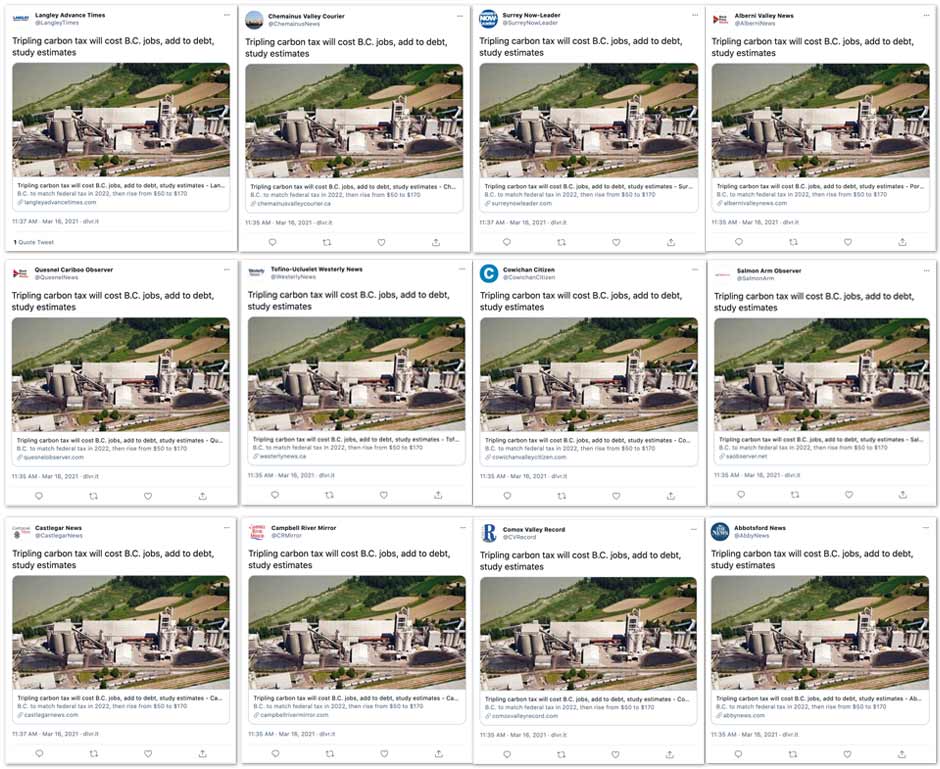 David Black, the CEO of Black Press, has been pursuing a dream of building an oil refinery in Kitimat since 2012. Black told reporters in 2019 he had lobbied both Alberta Premier Jason Kenney and former federal Conservative Party leader Andrew Scheer to support his proposal.

Many of Black’s newspapers are subsidized by the federal government. For example, the Campbell River Mirror, The Interior News, North Island Gazette and Williams Lake Tribune are among those listed as 2020 host news organizations for Local Journalism Initiative funding.

Fletcher, a BC legislative press gallery member, has been previously criticized for promoting anti-climate science messaging from dubious sources on social media.

Serious question: what would B.C.’s legislative press gallery do with a columnist who actively undermined the science of vaccines? Claiming that the planet is not warming is quite literally a conspiracy theory. #bcpoli https://t.co/TDlPOCn7mJ

“There are some significant gaps in the report that really undermine its credibility.”

Notably, said Petrevan, the report does not take into account the “Output-Based Pricing System (OBPS),” a measure specifically designed to cushion the financial impact of the carbon tax on industry and ensure companies don’t relocate their facilities to avoid paying for carbon pollution. Under OBPS, companies only pay for emissions that exceed a set level.

The report states it didn’t factor the OBPS because it is “transitional and is scheduled to be phased out by 2030.”

However, Petrevan noted OBPS is likely to be extended after 2030, meaning industry will continue to be protected from the full financial impact of the carbon tax.

“(The report) applies the full carbon price to industry, whereas the existing OBPS helps to cushion the impact on industry,” Petrevan explained. “That’s probably why the model shows profound reductions in GDP.”

As well, Petrevan added, the report makes an “overwhelmingly false assumption” by ignoring the economic impact of taking no action on climate change.

The Fraser Institute claims it didn’t factor the cost of inaction because the carbon tax alone would “in principle” only reduce a “very small fraction” of greenhouse gas emissions, despite experts pointing out that carbon pricing is widely recognized as a key part of climate action plans due to its cost efficiency.

“In Canada we’ve already seen average insurance losses from climate related disasters grow more than ten fold since the 1970s, and forecasts of the insurance related costs of climate change will grow between $21 billion to $43 billion by mid century,” Petrevan noted, adding that some studies have found uncontrolled climate change could see global GDP fall by more than 20% by 2100.

Petrevan also pointed out that the report applies the full carbon price to Quebec rather than assuming the province will continue to apply its California-linked cap-and-trade program.

“The analysis and modelling that they use to put into the report are not actually based on existing or future policy forecasts,” Petrevan noted. “Modelling is a great way to make numbers say something that you want them to say, but it’s not actually grounded in reality.”

Petrevan said it’s understandable that some over-stretched and under-resourced journalists might not have time to properly scrutinize dubious reports, but that “for readers, we can actually arm them with the appropriate arguments to say this isn’t right.”

Trevor Tombe, an economist at the University of Calgary and Fraser Institute author, agrees the report’s omission of the OBPS is significant.

“The estimated economic impact they find in the paper is too large, as it abstracts from the large-emitter treatment where a large majority of the carbon pricing revenues are rebated in the form of output subsidies,” Tombe told PressProgress, noting that the OBPS “dampens the negative effect on GDP.”

“Between now and 2030, for example, there will be important mitigation technologies and behavioural changes in response to the carbon tax,” Tombe explained. “This will also dampen the adverse economic impacts.”

Isabelle Turcotte, director of policy at the Pembina Institute, noted that a transition to a low-carbon economy will inevitably lead to some job losses in the oil and gas sector, but not because of climate policies.

“Some jobs will be lost because globally these products are less and less in demand, and they’re less competitive with other products,” Turcotte told PressProgress. “Let’s make sure that we’re making those more competitive products and let’s have plans in place for people whose jobs are at stake here.”

“These jobs are being lost because of changes in the global market, and we need to get ready for that,” Turcotte added. “It’s widely recognized among economists and policymakers that carbon pricing has to be part of a holistic and credible climate plan.”

Turcotte said it’s always a good idea for journalists to engage experts on carbon pricing, rather than taking dubious conclusions from organizations like the Fraser Institute at face value.

“I would always be tempted to multiply the number of people that journalists talk to,” Trucotte explained. “There are lots of people who’ve been working on carbon pricing in Canada and internationally, and the consensus is really clear.”

The Fraser Institute did not respond to a request for comment from PressProgress.