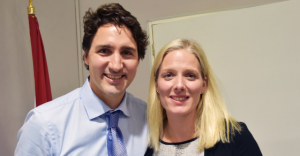 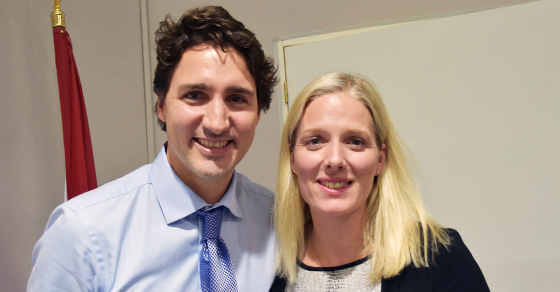 A lot of angry tweets are being sent to @cathmckenna after the Liberal government approved the Pacific Northwest LNG project.

Not a good day to check the tweets being sent to @cathmckenna.

On Tuesday, the Liberal government approved the Pacific Northwest LNG project in British Columbia, a move that might be of some assistance to BC Premier Christy Clark as an election looms on the horizon.

The controversial project involves fracking for natural gas in northern BC and building a pipeline to an export terminal to the Pacific coast.

First Nations leaders say the government hasn’t consulted impacted communities, while environmental groups say the project will be “one of the largest carbon polluters in the country.”

Despite these criticisms, Environment Minister Catherine McKenna claimed the Liberal government’s decision to approve the LNG project was guided by “science” and the “traditional knowledge of Indigenous peoples.”

This decision was based on science, traditional knowledge of Indigenous peoples and other relevant scientific evidence. pic.twitter.com/RlAcrkyplj

Let’s check-in and see how people are reacting to that:

when i met @cathmckenna i thought she understood #haidagwaii ‘s stance against #LNG , now i know the liberals don’t even care about us.

Shame on @cathmckenna for approving the Pacific NorthWest #LNG project! No credibility as environment and climate change minister!!

#PNWLNG was approved based on flawed science by the proponent. 130 scientists came out against it. Disgusted @JustinTrudeau @cathmckenna

@cathmckenna you are a liar and a fraud. You have betrayed your people and sealed your children’s hopeless fate. Are you proud of yourself? https://t.co/chzeEQN7df

Awful, stupid, and a real betrayal on the environmental front. @cathmckenna https://t.co/rRippWTbsn

@haikuvikinggal @cathmckenna @cbcnews And so it starts. The ugly second year (almost) when promises get broken & true colours show.

@BillyOHanlon @cathmckenna Me too; if I see one more liberal selfie…. #climatechange is nothing more than a farce to them.

This is not sunny ways, it’s Harper ways. https://t.co/ukS3RsWCYA

Meanwhile, others noted McKenna’s invocation of the “traditional knowledge of Indigenous peoples” in an attempt to sell a fracking project.

@cathmckenna what traditional Indigenous knowledge specifically are you referring to that would condone a natural gas pipeline? Ludicrous.

How dare these gasholes claim that they used ‘traditional #Indigenous knowledge’? See how the Liberals USE us? Shady AF. #Cdnpoli

And all this comes on the heels of McKenna confirming her Liberal government would be sticking to Stephen Harper’s targets for reducing carbon emissions.

@cathmckenna @CBCNews and what about climate change? I believe that is part of your mandate (Psst… This is not going to help with that)

.@ec_minister @cathmckenna in #Paris at #COP21 you looked me in the eye and said you’d do things differently on #climate. #PNWLNG #cdnpol

No better than the HarperCons we tossed… Enjoy the next 3 years…. pic.twitter.com/bEGIXXdv1J

Wrong signal from @cathmckenna on #PNWLNG. BC has no plan to hit climate target. Closing the gap to 2030 requires all provs to get on track.

A review of all the greenhouse emissions from #PNWLNG would sure wow them. #BCpoli #Canpoli https://t.co/wJZAu8e646

What about the science that says increasing greenhouse gas emissions is going to destroy the whole planet? #keepitintheground https://t.co/QyUD3NLY43

When they make decisions like approving #PNWLNG, I find myself wondering how @cathmckenna & @JustinTrudeau can go home & face their children

@cathmckenna How does this meet our Paris commitments? Or any real commitment to climate change? #notok #disappointed #heartbroken https://t.co/fTJy5dvnjm

I’m in shock. Why bother talking about climate commitments while at the same time approving this. @cathmckenna https://t.co/jthUhp69JW

I used to think that @cathmckenna actually cared about climate change. Obviously I was wrong. #PNWLNG #cdnpoli

That didn’t go well at all.