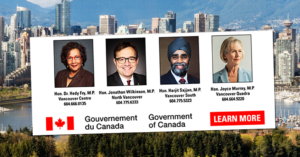 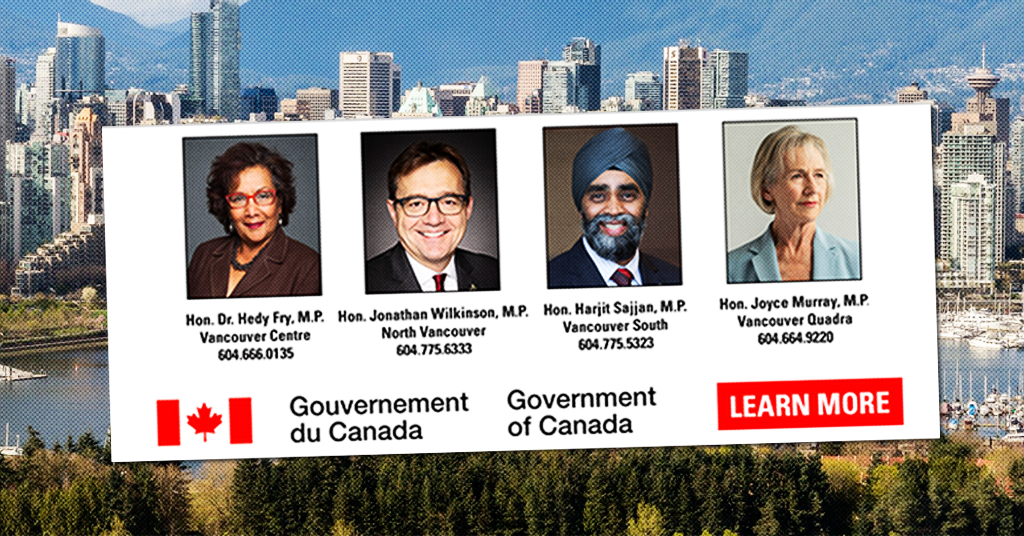 The offices of a few Vancouver-area Liberal MPs are standing behind a COVID-19 ad that makes use of one of the Government of Canada’s official logos, a detail experts say likely violates political advertising rules.

“We’re here to help,” reads the ad. “During these challenging times, your local MPs are here to serve our constituents. For the latest updates on COVID-19 go to canada.ca.”

The ad is accompanied by the signature of the Government of Canada.

A staffer in Wilkinson’s constituency office told PressProgress the ad was paid for out of the MPs’ office budgets, Parliamentary funds provided to cover “employee salaries, service contracts, hospitality and advertising expenses.”

The Government of Canada strictly controls use of its signature. According to the Federal Identity Program,  it is the “universal signature of the government” and is intended to identify government entities or activities and “convey government sponsorship of shared-cost programs.”

The Federal Identity Program prohibits uses of any government symbols “without the prior approval of the Treasury Board ministers.”

Federal advertising rules explicitly state ads may “not give the general impression or appear to promote political party interests” and may “not contain the name, image or voice of any current Prime Minister, Minister of the Crown, Member of Parliament or Senator.”

Nonetheless, Wilkinson’s office suggested anyone who questions the Liberal ad’s use of the Government of Canada signature is “reading way too much into this.”

But Alex Marland, a political science professor at Memorial University, pointed out individual MPs are not members of the government.

“The only people who are part of the Government of Canada are ministers,” Marland told PressProgress. “Hedy Fry is not currently a member of cabinet.”

Marland said the ad’s use of the official symbol “fails” the government’s own criteria for non-partisan communications.

“The Government of Canada wordmark must be removed immediately,” he said. 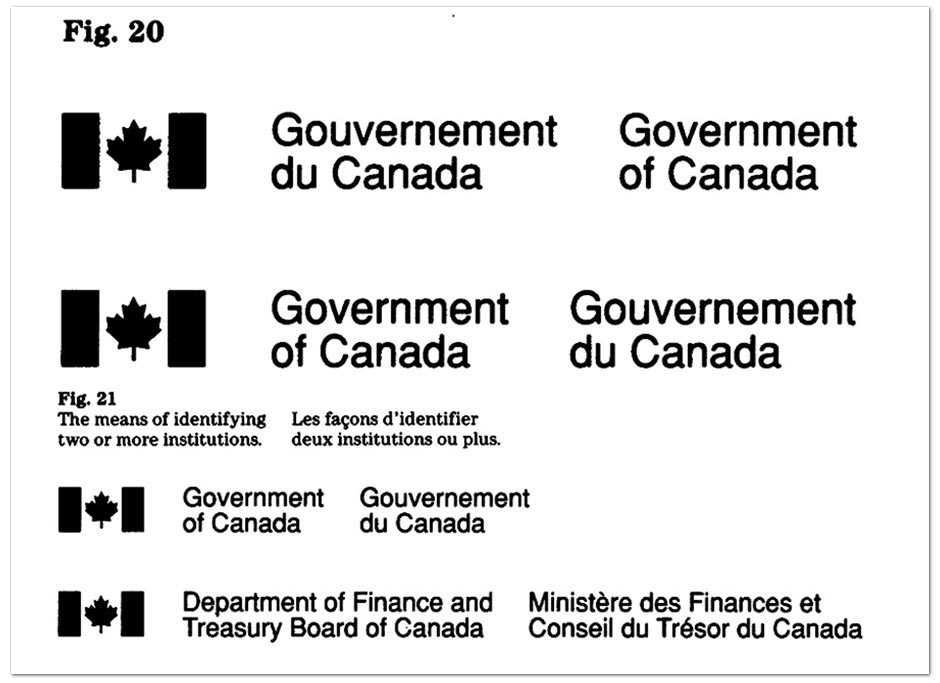 Jonathan Rose, a political science professor at Queen’s, told PressProgress that the ad “could invite false inferences such as only Liberal MPs care about keeping citizens safe.”

“The wordmark or logo has very clear and limited use to ensure that the message represents the corporate view of the government of Canada,” Rose said. “This does not, on the face of it, look to be that.”

“It does seem to be a violation of the Treasury Board Directive on the Management of Communications,” he added.

Caleigh Garland, a staffer for Joyce Murray, told PressProgress her office sees nothing wrong with the ad, insisting “it’s a fairly routine thing.”

“It’s not partisan,” she stressed, adding MPs “serve anyone in our constituencies.”

Garland said the ad was intended as a “public service” rather than a “partisan ad,” and said MPs from any political party can use the Government of Canada’s official symbols in their messaging if they wish.

“This one was simply more as a public service to highlight the importance of programs the government has put in place right now,” she explained.

The Vancouver Courier told PressProgress the ad was placed by an ad agency called Choice Communications.

Helen Yu, the head of the communications firm, did not respond to requests for comment from PressProgress.

Yu appears in a number of Facebook photos with Prime Minister Justin Trudeau and Defence Minister Harjit Sajjan. Choice Communication’s website also features a testimonial from BC Liberal MLA Sam Sullivan, who praised the firm for its work with “non-English-language media.”

A version of the same ad without the official signature but linking directly to the Government of Canada’s website also appears on Lahoo, a Chinese-language news website based in Vancouver. 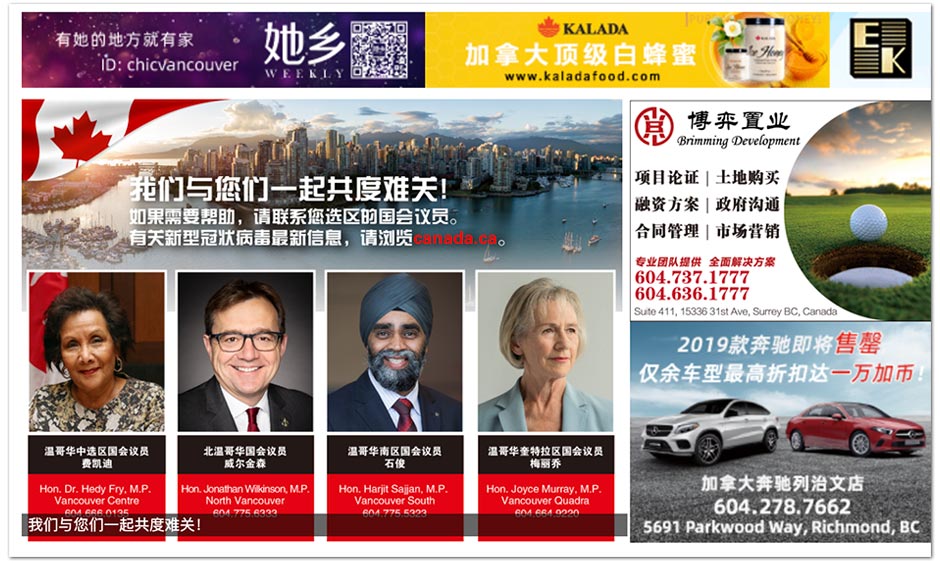 Update (April 13): Following publication of this story,  Cynthia Bunbury, Constituency Director for Jonathan Wilkinson, told PressProgress that a Liberal staffer made an “honest error” by including the Government of Canada’s signature in the partisan ad.

“I have discovered that the office in charge of managing the ad that you had questions about made an error,” Bunbury said. “They used the Government of Canada logo instead of the Parliamentary insignia.”

A representative for Glacier Media confirmed the ad is no longer running on the Vancouver Courier or any of the chain’s news websites.