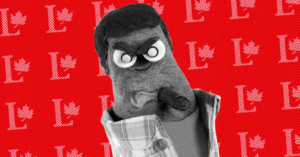 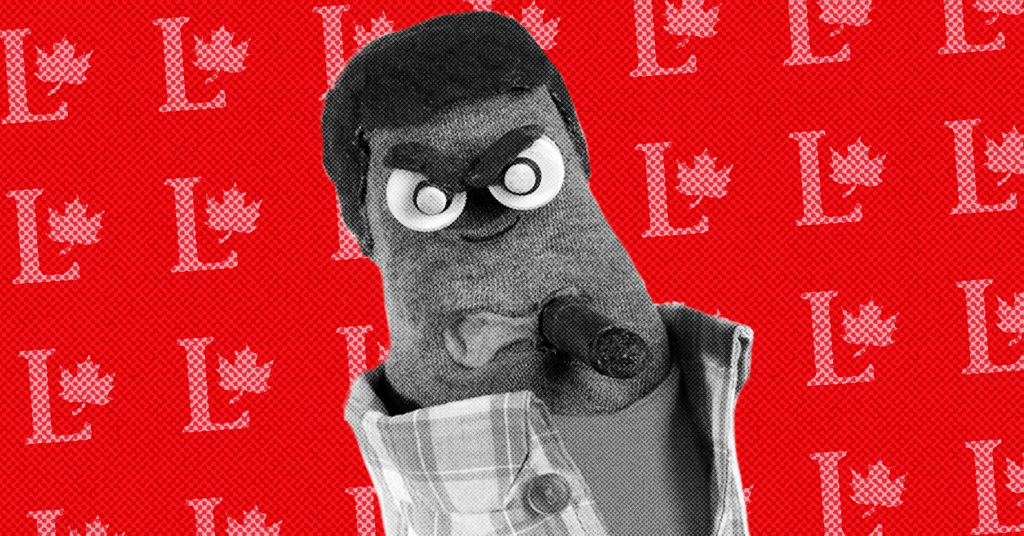 Ed the Sock, a sock puppet voiced by comedian Steven Kerzner who is best known as a Canadian late night TV host and former Much Music VJ, has recently sought to resurrect his career as a “centrist” political commentator.

The FU Podcast Network, a platform Kerzner launched in 2018 promising political commentary to challenge “voices on the Left and Right,” has recruited pro-Liberal Twitter users as podcast hosts, welcomed prominent Liberal politicians as guests and even received a congratulatory letter from Prime Minister Justin Trudeau.

In a statement to PressProgress in 2019, Kerzner described Ed the Sock as Canada’s “leading celebrity voice on the side of progressives” and suggested he had become a reluctant hero for “moderate progressives” who look to him as “Trudeau’s defender.” 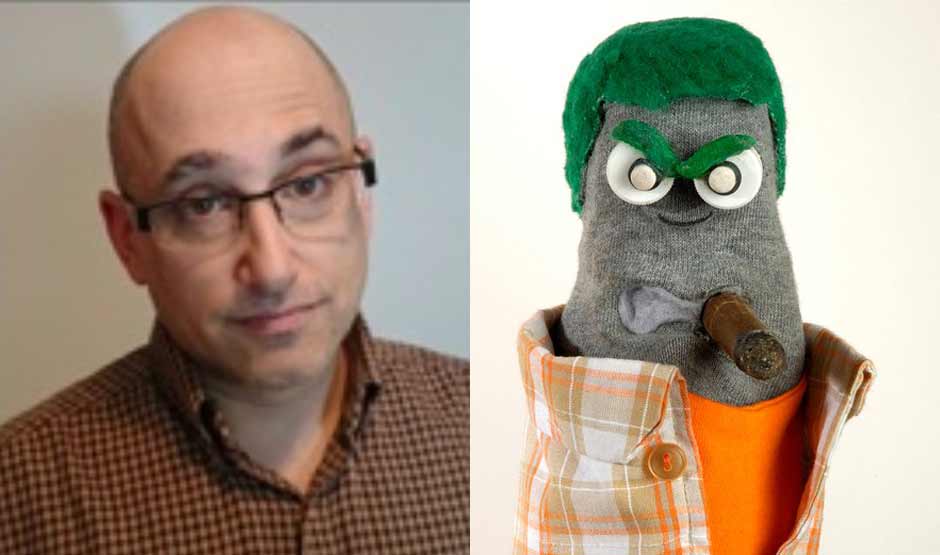 In recent months, both Kerzner and his podcast network have been outspoken in defending the Trudeau Government’s dealings with WE Charity.

But in defending Trudeau’s government over the scandal, Kerzner has repeatedly honed in on NDP leader Jagmeet Singh’s turban.

Speaking as Ed the Sock on a July podcast, Kerzner said: “Jagmeet Singh is dumb as a post, the only bright thing above his neck is what he wears on his head.”

A week later, Kerzner continued with his running gag, tweeting: “I’ve determined the brightest thing about Jagmeet Singh is his turban.”

The next day, Kerzner encouraged his nearly 50,000 followers to start calling Jagmeet Singh “Jughead Singh.” When some of his followers expressed concern that the nickname sounded racist, Kerzner insisted it had “nothing to do with a turban.”

Based on the stupidity of his political posturing and vapid statements, I think it’s time we started calling him #JugheadSingh.

Let those that go there go there. Jughead is a dumb Archie character and term for a not smart person. Nothing to do with a turban.

Kerzner’s most recent effort to encourage Liberals to start calling Singh “Jughead” have backfired dramatically, with “Ed the Sock” trending nationally on Twitter and condemnations from Members of Parliament.

In response to accusations of racism, Kerzner tweeted: “Just because he’s a brown person doesn’t mean he gets a free pass.”

Bullshit. Just because he’s a brown person doesn’t mean he gets a free pass. I use O’Toole’s name to ridicule him as a tool. It’s no different.

NDP MP Don Davies tweeted that Kerzner’s use of the term was “pure racism,” describing it as a “dog-whistle” aimed at “Jagmeet’s Sikh religious head covering,” and called on Liberal MPs to “condemn this blatant hatred.”

In his 2019 book, Singh described being targeted by bullies and physically attacked as a child because he wore a patka (a head covering similar to a turban worn by Sikh boys). Singh wrote that he was regularly tormented with racist slurs, including “diaper head,” “paki” and “Jughead.”

This is pure racism. This Liberal troll should be blocked and ignored. I am looking for Liberal MPs on Twitter to condemn this blatant hatred. https://t.co/NLVJ0uDtj5

Kerzner told PressProgress that he felt Davies’ tweet was “highly inappropriate” and accused the NDP MP of engaging in “online bullying.”

He downplayed his use of the term “Jughead” as a “comedic device,” claiming it is no different than Justin Trudeau being called “Turdeau” by a conservative. “The name ‘Jughead’ was a sound-alike play on his name,” Kerzner said. “Not mocking his name’s ethnicity, just playing off the similar sounds.”

Kerzner said he does not think “Jughead” has any racist meaning and pointed to his “ardent advocacy for people of colour” as proof he is not racist, but he also said he can understand why some people interpreted his comments as racist.

“I wasn’t aware that kids called him that name,” Kerzner said. “I’m reasonably sure that he has overcome schoolyard taunts just as I have. Had I known, though, that this had occurred I wouldn’t have used the term.”

“I don’t see Jagmeet Singh as a man in a patka, I see a federal political leader,” he added. “His race or religion are not markers I would focus criticism on, I’m a person of faith myself and respect that in others.”

On Twitter, Kerzner has refused to apologize for his comments but expressed “regret” if other people made “associations based on their experiences.”

I will not apologize for being ‘racist’ because I’m not & my Tweet wasn’t ‘racist’ in intent. I likened a political leader to a comic character whose name sounds something like his. But there are those who took from it associations based on their experiences. I regret their hurt.

The Liberal Party of Canada did not respond to multiple requests for comment from PressProgress about Kerzner’s comments, however, several Liberal MPs voiced agreement with Davies’ tweet and distanced themselves from Kerzner.

“Since Jagmeet Singh was elected leader of the New Democratic Party, he has faced overt racism simply because of his faith,” Minister of Digital Government Joyce Murray told PressProgress. “I condemn racist comments, no matter where they come from.”

Murray described Kerzner’s comments as “childish name-calling” and said they are “unbecoming in our political discourse and seek to diminish our democratic process.”

Health Minister Patty Hajdu likened Kerzner’s “comment against Mr. Singh” to “the threats and violence many others face as elected leaders” and suggested his “insults” are dumbing down political debate.

“All too often, people descend to belittling language to describe others with different perspectives or beliefs,” Hajdu told PressProgress. “Language that is intentionally demeaning of a persons’ gender, appearance, cultural background or any other personal attribute is not only hurtful and harmful, it leads to a diminished debate of what really matters.”

“The comment has clear racist implications and should not be simply dismissed as a bad joke,” Vaughan told PressProgress. “Intent is not the issue, impact is.”

“Ed the Sock’s comments are inappropriate and racist,” said Liberal MP Adam van Koeverden. “I don’t consider him a legitimate source of information or an important voice in Canadian political discourse,” adding that he puts his political analysis in the same category as “Beavis and Butthead.”

Liberal MP Hedy Fry replied directly to Davies on Twitter, stating that she agreed Kerzner’s insults were racist and thanking the NDP MP for “calling this out.”

Thank you for calling this out.

Liberal MP Mark Gerretson said he thinks “Mr. Kerzner should have given better thought to his choice of words if indeed that was not his intent.”

“Even if Mr. Kerzner is to believe that he was not being racist, but rather just calling Mr. Singh ‘lazy’, I find this to be troubling as well,” Gerretson told PressProgress.

“I have never known Mr. Singh to be lazy,” the Liberal MP added. “He is a hard working member of Parliament who fights for his constituents and strives daily to uphold and promote the values of the party he leads.”

“When my father was the Attorney General of Ontario, Mr. Singh was his NDP critic for a several years. My father speaks very highly of Mr. Singh and his passion. The word lazy was never used to describe his performance.”

Kerzner, a once failed candidate for Mike Harris’ conservatives in the 1990s, adamantly denies he is “partisan for the Liberals” despite his outspoken support for Trudeau’s government. He also doesn’t care what they think about his comments.

“I don’t think Liberal MPs would condone my comments,” Kerzner conceded, but added: “I don’t seek their permission or require it.”

Although he insists he’s done nothing wrong, Kerzner told PressProgress he will stop calling Jagmeet Singh ‘Jughead’ “now that I am aware that for him and others it has associations which are not the Archie character.”

Update: This story has been updated to include comments from MPs Adam Vaughan and Adam van Koeverden that were received after publication.

Correction: This story originally identified Joyce Murray as the President of the Treasury Board, which was her former position. Murray currently serves as the Minister of Digital Government.