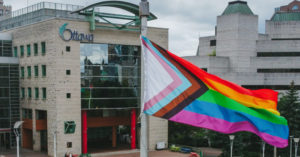 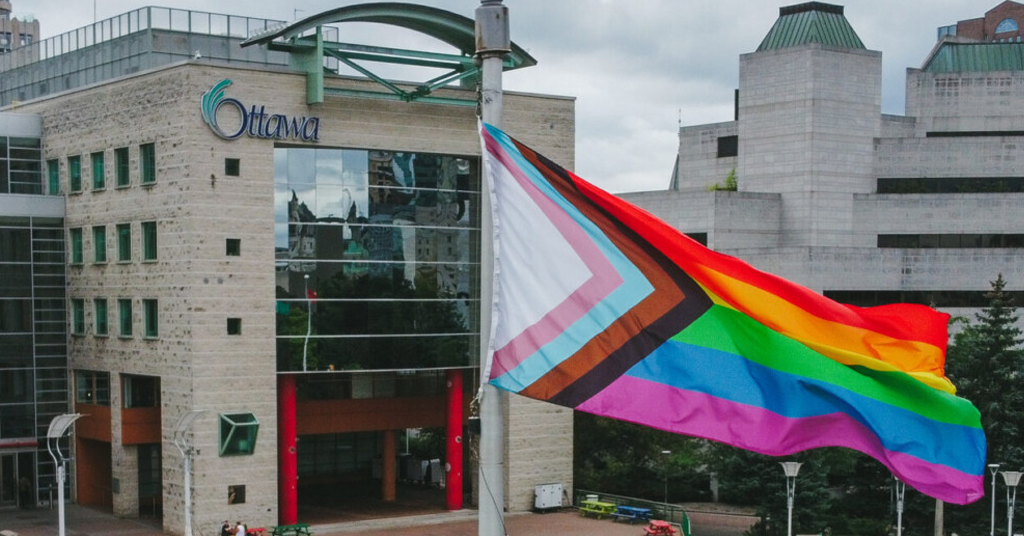 As the City of Ottawa get ready for a municipal election this fall, LGBTQ2S+ candidates say they increasingly find themselves dealing with harassment targeting them over their identities.

And candidates say the intensity of the attacks have been accelerating in the wake of the convoy occupation and a push by a slate of fringe candidates looking to stack a local school board with anti-LGBTQ2S+ trustees.

“I’ve never experienced homophobia at the doors, or really in my own neighbourhood,” Troster told PressProgress, but added that the intensity of some of the messages her campaign has been receiving online has been “really worrisome.”

Troster says she’s received abusive messages on social media implying she is a threat to children — she recently tweeted a screenshot of an email ranting about the “WOKE movement” that links her to the “dangers the LGBT community is subjecting our children to.”

“Queer people involved in public life are being called groomers, like we are literally getting actual accusations of pedophilia,” Troster said. “This harkens back to the 1970s, when Anita Bryant was doing this, she did a ‘Save Our Children’ campaign against gay teachers in the 70s.”

“It seems to be a common line from these folks, many involved with the anti-vaccine movement or whatever you call it, to say ‘oh, don’t trust a candidate who puts pronouns in their bio because that’s an indication they’re unreliable’.”

In case you are wondering why we still need Pride, check out the lovely email I just received. When I came out more than 20 years ago, I felt so lucky to be in an era where homophobia would soon be a relic of the past. How wrong I was. Hug a queer kid today for me. pic.twitter.com/NRmB8WsuaG

Troster first began receiving messages after she posted a photo of a truck displaying the confederate flag driving around an Ottawa neighbourhood on the first weekend of the convoy occupation.

“Since the convoy came into town, I’ve been absolutely inundated in my Twitter mentions with racist, antisemitic and specifically homophobic harassment,” Troster said. “It was weeks of me having to block thousands of accounts, like just bananas stuff.”

Troster believes the harassment targeting local candidates flows out of the same “online extremism” that has led to the harassment of federal politicians and Ottawa-based journalists.

“It worries me as a queer candidate,” Troster said. “Should I be elected, do I need security? Other city councillors don’t.”

In the lead-up to October’s municipal election, the presence of a slate of candidates running to become Ottawa school trustees is only increasing tensions.

Anti-LGBTQ2S+ fringe candidates Shannon Boschy and Chanel Pfahl are running as school trustees in Ottawa based on campaigns revolving around their opposition to “gender ideology.”

According to the Canadian Anti-Hate Network, both candidates have an extensive history of anti-LGBTQ2S+ activism and have associated with extreme far-right figures.

The capital’s school board trustee elections are home to vocal opponents of rights for trans kids.https://t.co/6S26ObUmdn
1/

Boschy, a financial planner at Exponent Investment Management, has promoted conspiratorial claims about Ottawa Mayoral candidate Catherine McKenney, claiming they are involved in a “cover-up” involving the Children’s Hospital of Eastern Ontario subjecting “hundreds of children” to “medical experimentation” and “mutilation.”

Last October, Boschy was involved in protests staged by anti-LGTBQ2S+ adults at Notre Dame High School and Nepean High School in Ottawa’s west-end – the protesters fled the area after finding themselves vastly outnumbered by local teenagers.

The students accomplished in 20 minutes what half the politicians in Ottawa couldn’t in an hour 🙂 He’s leaving. pic.twitter.com/tlbvaAZezG

“He thinks he can get more social media engagement or attention, perhaps donations, by running against the only openly trans school board trustee in Canada,” Evans told PressProgress.

Boschy confirmed to PressProgress he does not personally live in Zone 6 and noted that while school trustees are under no residency requirements and his child lives in the school zone, his animosity towards Evans was the main factor in his decision to become a candidate for school trustee.

“I chose zone 6 because Lyra Evans, the OCDSB and Catherine McKenney slandered myself, Chanel Pfhal and another activist in October,” Boschy told PressProgress, accusing them of mobilizing a “violent mob against us in the name of anti-hate and anti-bullying” at Notre Dame and Nepean High School.

“I disagree strongly with the politics of Trustee Evans,” Boschy said, going on to link Evans to historical atrocities committed by the Soviet Union on the basis that she was critical of the convoy occupation of Ottawa and that he once saw an unrelated individual display a hammer and sickle at a counterprotest.

“These are hate symbols because communists killed 2-3 times more people in the 20th century than Nazis trying to make everyone the same – which is what Evans wants to do.”

Evans said that while there has “definitely been an increase lately,” she has been targeted by ongoing harassment campaigns for the last four years, with most of it originating from outside of Ottawa.

“I have fielded hate mail from all over North America,” Evans said, adding she’s been added to lists and online databases that enable targeted harassment of LGBTQ2S+ public officials.

“There’s been a huge movement in the United States to have the anti-LGBTQ folks take over school boards,” Evans said. “We’ve seen small local elections where people are generally less engaged, those anti-LGBTQ politicians will remove all the LGBTQ books from the school libraries” or “change the curriculum or decide to use a certain brand of textbook.”

Evans says candidates like Boschy underline the importance of representation on local school boards – an issue she says is not about “tokenization” but about protecting LGBTQ2S+ students and their families.