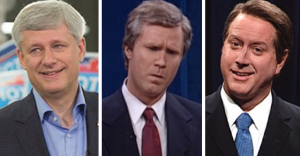 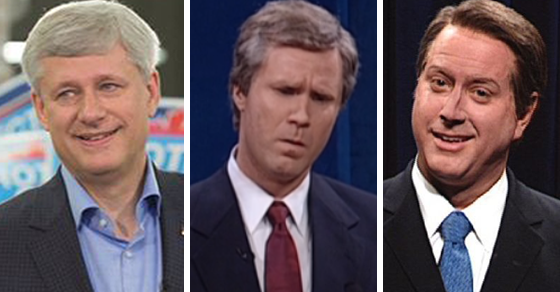 Where did Stephen Harper get such an idea? One possibility is a 15-year old Saturday Night Live skit.

Conservative leader Stephen Harper pledged Friday to introduce a so-called “tax lock” that would ban any future increases to Employment Insurance and the Canadian Pension Plan.

And to underline how serious he is, Harper even took a key and locked a box!

Where did Stephen Harper get such an idea?

One possibility is a 15-year old Saturday Night Live skit in which Al Gore, played by Darrell Hammond, explains he will use a “lock box” that will “be used only for Social Security and Medicare.”

Gore goes on to explain his “lockbox” would “have two different locks” with one key “kept by the President” and the other key “sealed in a small, metal container and placed under the bumper of the Senate Majority Leader’s car.”

During a 2000 Presidential election debate Al Gore (the real Al Gore) said “I will keep Social Security in a lockbox,” which he later described as an “iron clad lockbox” to prevent George W. Bush from raiding the “lockbox” and “squander” the surplus on tax giveaways.

Like Bush, Harper has also raided the “lockbox,” using a $2.7 billion surplus in Employment Insurance to balance the budget after spending billions on tax breaks for wealthy Canadians.