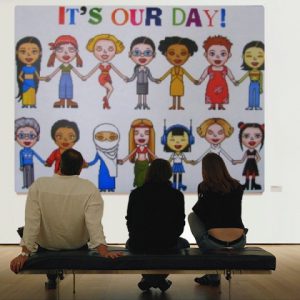 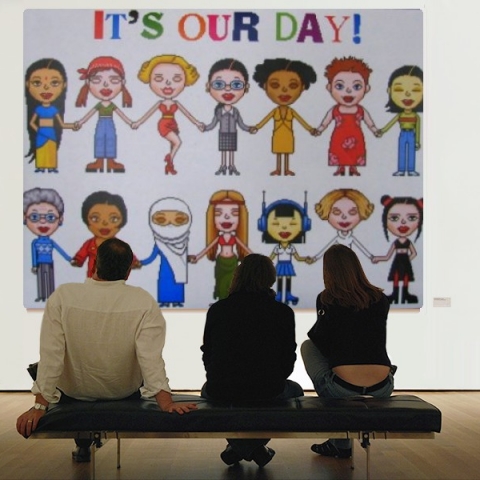 Updated March 10 Funny story. International Women’s Day is coming up, so the Canadian Museum for Human Rights figures it should mark the important day. The museum, “focused on the universal topic of human rights,” taps renowned Canadian historian Veronica Strong-Boag to write a blog post. Strong choice: the former president of the Canadian Historical […]

International Women’s Day is coming up, so the Canadian Museum for Human Rights figures it should mark the important day.

Strong choice: the former president of the Canadian Historical Association received the Tyrrell Medal for excellence in Canadian history from the Royal Society of Canada in 2012. Strong-Boag, professor emerita at the University of British Columbia and a leading women’s historian in the country, is currently the Ashley Visiting Professor at Trent University.

She submits her commissioned post about the history and evolution of IWD, and why women’s rights are human rights. It’s posted on March 4 — not for long, though.

Read this remarkable editor’s note from ActiveHistory.ca, where Strong-Boag’s piece is now published.

“It was, however, almost immediately withdrawn as ‘Communications’ at the Museum deemed the one line comment on the current federal Conservative government unacceptable as written. The offer of a substantive footnote and illustrative example from the author brought no reply. ActiveHistory.ca has reposted this time-sensitive contribution here, to which examples of anti-women policies and a footnote have been added.”

The offending line in the 800-word piece?

“In 2014 Canada’s Conservative government left its anti-woman record unmentioned (which included withdrawal of plans for a national child care program and major cuts to Status of Women Canada [2006], the prohibition of civil servants taking pay equity complaints to the Human Rights Commission [2009], the denial of international funding for abortion [2010], and major cuts to public services that employ and serve significant numbers of women)[1] as it dedicated IWD week to the ‘valuable contribution of women entrepreneurs.'”

For its part, the museum confirmed Monday that this line did, in fact, get the post yanked.

In a statement to PressProgress, a spokeswoman for the museum explained that its actions “were motivated entirely by a need to ensure that our blog does not become a platform for partisan political commentary, or set any precedent for such.” The museum “will always strive to ensure that all our content and commentary be perceived as objective, balanced and non-partisan.”

But, just to be clear, the museum has “no objections to posting fact-based commentary that raises concern about policies or activities of the Govt of CND,” according to a weekend tweet in response to criticism.

The museum clarified on Monday what it meant by that. “When we to refer to ‘fact-based commentary,’ we are referring to avoiding comments that appear partisan in nature. We believe that the phrase ‘Canada’s Conservative government left its anti-woman record unmentioned’ could be construed as a partisan statement.”

Historians who work with facts disagree with the museum’s approach.

On IWD Day, we should also ask: why is a historian who has good reason (and sound historical evidence) for her criticism of the federal government considered dangerous enough to be silenced by a supposedly arms-length institution? As a feminist historian myself, who has looked into Canada’s record of denying civil and political rights to ethnic minorities and to immigrant, labour and feminist activists in the past, I feel it especially important that we remain vigilant about protecting human rights in the present.

And here’s what Strong-Boag wrote to the institution’s communications shop, after they explained why her post was pulled down:

I have read your effort at explanation with interest and incredulity. Your suggestion that guest blogs ought to “consist of anecdotal accounts of first-person experiences that illuminate human rights themes, and that they include “rich media” relevant to the story” and that they “not be used as, or be perceived as, a platform for political positions or partisan statements” is both naive and pedagogically unsound for a museum supposedly dedicated to (the promotion of) Human Rights. It suggests that Human Rights are almost purely about entertainment and that authors can pretend impartiality in dealing with them. Surely this is not the case with the Nazi Holocaust or similar treatments of the world’s indigenous or GBLT peoples or, as in this instance, with the continuing oppression of women and girls around the world? In fact, my contribution was very much both a personal and a scholarly statement, one strongly rooted in the evidence of researchers and activists and my own commitment to a better day for all. It was not intended for entertainment (although I deliberately made it accessible) but for instruction and a reminder that gender inequality needs to be battled. Since museums and institutions of public memory are not normally intended to imitate Disneyland but to provide serious, although engaging and accessible, observations on the world, I have been a long time supporter of a Canadian Museum for Human Rights. Your letter has been extremely disheartening. My observations about the federal government are hardly new or unique. In fact, there is a widely held consensus among scholars that the present Conservative administration has been a disaster for human rights of every sort in Canada and abroad. It would have been completely unprincipled for any serious blogger to ignore the link between IWD and unaddressed issues such as Missing and Murdered Women in this country. Your attempt at an explanation for censorship suggests the Museum needs to engage in some serious self-reflection about its mandate and its apparent subordination to political masters.

Photo: Jiggs Images. Used under a Creative Commons BY 2.0 licence.