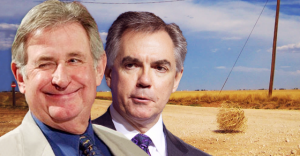 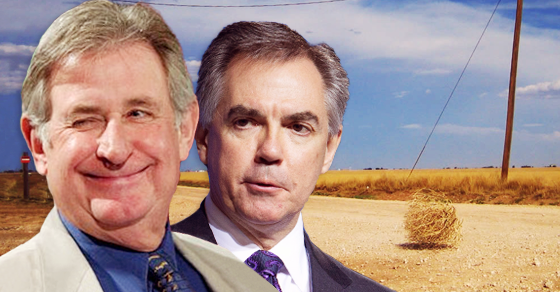 Have Alberta’s Progressive Conservatives suddenly forgotten the last 44 years they were in power?

Apparently, yes. They have forgotten:

Jim Prentice 10 months ago: ““The most serious fiscal circumstance we have faced as a province in a generation.” https://t.co/TPrup5qKzt

“We only left the car parked on the edge of the cliff. We were out of the driver’s seat when it fell off.” #ableg https://t.co/PB1meWFfTy

After ruling the roost since the 1970s, Alberta conservatives are quick to forget decades of right-wing economic policies that helped create a cycle of booms and busts that not only left Alberta vulnerable to changes in global oil prices, but left the province’s finances in a mess, as well.

Conservatives will argue Alberta has a spending problem, except that’s not true.

A study by the Parkland Institute last year makes clear that Alberta’s spending on government programs has always been somewhere between average and below average.

Measured as a percentage of household income, Alberta’s program spending has been lower than the Canadian provincial average for much of the past twenty years: And over the past two decades, Alberta has never ranked highest among provinces in per capita program spending, while overall spending has only averaged 3.2% above the Canadian provincial average: That’s why former Bank of Canada governor David Dodge (someone who knows a thing or two about money) advised Alberta to increase spending in the last budget.

According to Dodge, Alberta “under-invested in public capital in the past and now has some catch-up to do to ensure an adequate level of public capital to meet current needs, let alone meet future needs.”

Alberta doesn’t have a spending problem, it has a revenue problem

So if spending isn’t to blame, what is?

The government isn’t bringing in enough revenue to avoid deficits – especially as plummeting oil prices have cut into the province’s revenue from the oil and gas sector.

Here are a few examples of conservative policies that helped create that problem over the years:

Flat income taxes: Former Premier Ralph Klein introduced a 10% flat income tax in 1999, meaning millionaire CEOs paid the same rate of tax as nurses, teachers or firefighters. Not only did this drain the provincial treasury, Klein’s regressive tax shifted the burden onto the backs of working Albertans and left Alberta as the only province in Canada with levels of inequality greater than in the United States. By 2012, Alberta’s richest 10% took home half of all income in the province.

How bad was the flat tax? Jim Prentice’s PC government proposed scrapping it last year and even Ralph Klein’s daughter thought it was was time for the flat tax to go.

Corporate tax cuts: Alberta’s PCs steadily cut taxes for the province’s most profitable corporations, from 15.5% in 2000 to 10% by 2006, where it remained until the PCs were voted out of office.

Royalty regime: Under former Premier Peter Lougheed, Alberta’s Heritage Savings Fund helped conserve the wealth generated by oil commodities for future generations, but Klein stopped allocating royalties to the Fund in 1997, leaving Alberta with only $16 billion in the piggy bank by 2013.

To put that in perspective, Norway’s Sovereign Wealth Fund has amassed nearly a trillion dollars in assets since it was created in 1990 – and at least one person over at the Fraser Institute thinks Norway is not a bad example for Albertans to look at.

“Ralph bucks”: After cutting services to balance the budget, Klein chose to give away $1.4 billion in the form of $400 payments to every person in the province – so much for that rainy day fund.

Ineffective carbon pricing: Instead of following British Columbia’s example and implementing a real carbon tax, the PCs introduced the Specified Gas Emitters Regulation in 2007. Not only did this fail to produce significant emissions reductions, but its tiny $15 per tonne penalty on companies that didn’t meet emissions targets was half of BC’s $30 equivalent. Plus, because the penalty only applied to a small percentage of emissions, the $15/tonne penalty worked out to an average of $1.80 per tonne instead.

In other words, Alberta’s conservative governments spent decades riding booms and ignoring the dangers of a bust.

Maybe conservatives should take Jim Prentice’s advice and take a “look in the mirror”?