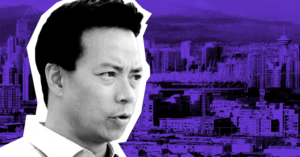 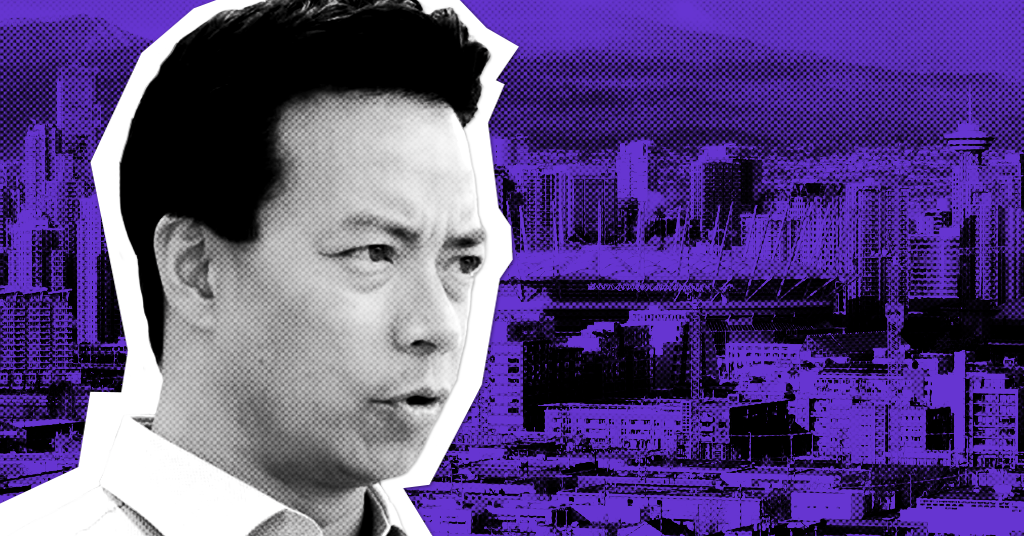 Still undecided about who you’re going to vote for in Vancouver’s 2018 municipal election this Saturday?

If so, that’s fine with the rich and powerful – the city’s wealthy elites have already settled on which horse they’re backing in this race anyway.

It’s not hard to see why the rich and powerful like Vancouver mayoral candidate Ken Sim and his right-wing “Non-Partisan Association” – they’re promising big tax breaks for major real estate developers and luxury homes in Vancouver’s most exclusive neighbourhoods.

Listening to the @CambieReport interview with Ken Sim, and my desk is now a mess because I keep spitting out coffee every time he says the NPA is “non-partisan”. We know exactly who the NPA is partisan for: business owners, the wealthy, and social conservatives.

And the party’s plan for the quarter-of-a-million struggling renters in Vancouver?

In other words, the NPA’s solution to the affordability crisis is to give tax breaks to luxury homeowners and let everybody else struggling to make ends meet live down in the basement.

Sound fair to you? These wealthy NPA supporters apparently think so:

Chip Wilson, founder of the Lululemon clothing empire and billionaire real-estate investor, was one of Sim’s early backers and is thought to be one of the behind-the-scenes power brokers that really pulls the strings. 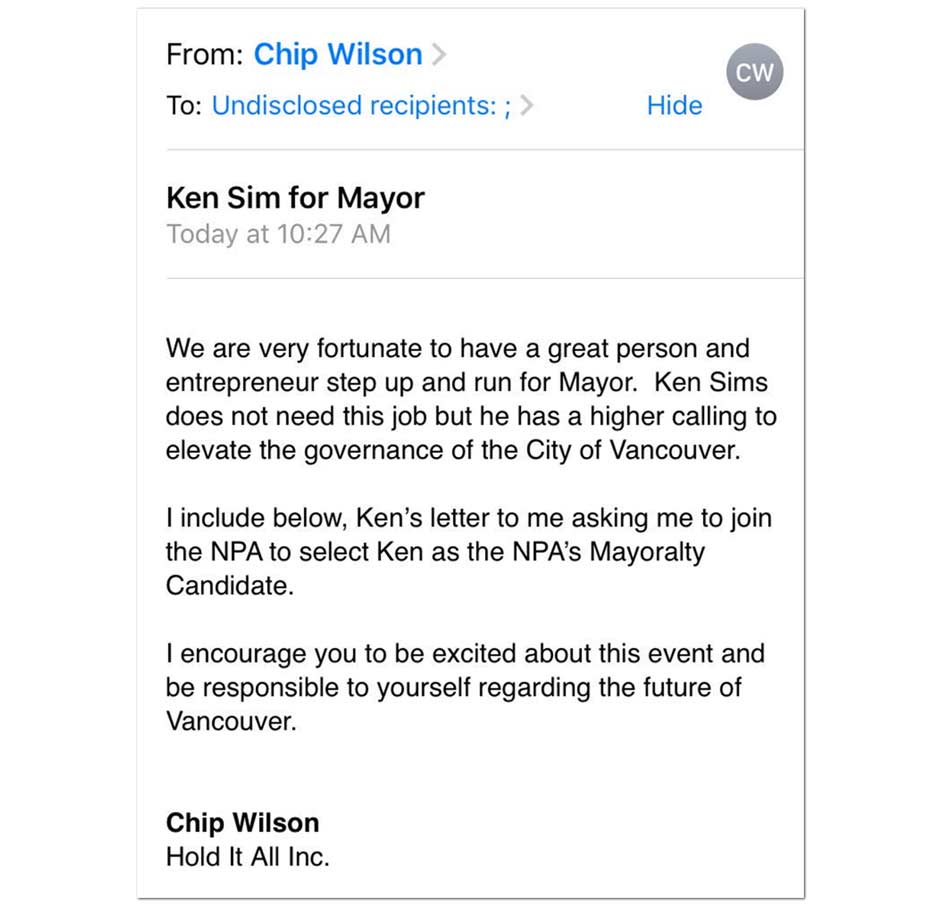 What could the yoga-pant magnate gain if city hall is stacked with NPA loyalists? For one thing, 90% of Wilson’s real-estate company’s assets are based in Vancouver, and the company announced in 2016 it was looking to accumulate a “$1.5 billion portfolio in ten years.”

The NPA’s “housing plan” promises to lobby the federal government for tax breaks that would seemingly benefit major real estate companies like Wilson’s.

Talking to voters on W. 4th and just spotted Ken Sim waiting in line at Chip Wilson’s book signing. Gives you a good sense of the NPA’s priorities. #vanpoli #VoteCOPE

On top of that, Wilson happens to own the single most expensive piece of property in British Columbia – a $78 million Kitsilano mansion. 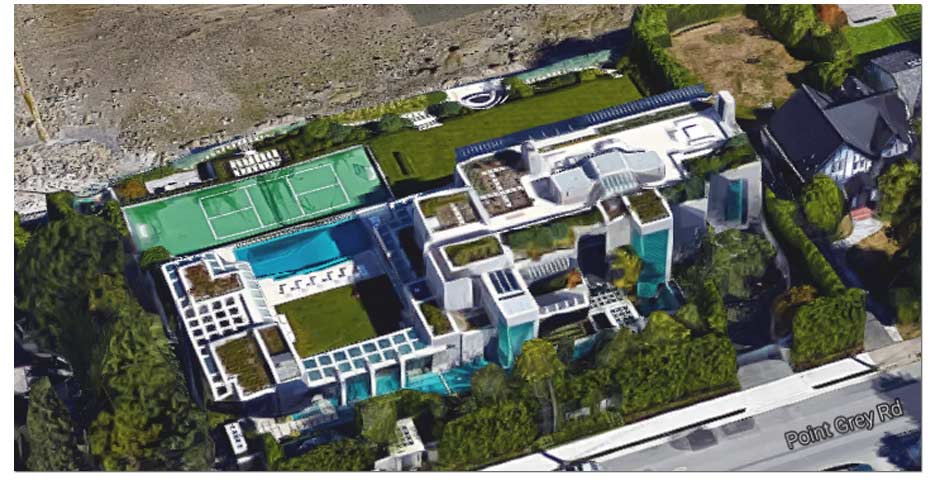 Peter Armstrong owns the Rocky Mountaineer railroad and he’s a backroom power broker for both the BC Liberals and the NPA – along with Wilson, he’s one of the kingmakers that helped Sim become the NPA’s mayoral candidate.

Armstrong has plenty of connections in Vancouver’s rich and powerful elite circles thanks to his years as President of the NPA and his status as a “kingpin” of Vancouver’s tourism industry.

Like Wilson, Armstrong is also a player in real estate. According to his website, his companies have “numerous holdings in the travel, real estate and financial sectors.”

Wasn’t Ken Sim the guy backed by Peter Armstrong and Chip Wilson? So glad we got big money out of #vanpoli

Hassan Khosrowshahi, the billionaire founder of Future Shop and a director of the right-wing Fraser Institute, has been one of the NPA’s top donors, contributing to their $800,000 campaign war chest.

Khosrowshahi is also the chairman of the Wesbild private real estate company, which is the kind of company that would benefit from NPA promises to “speed up the construction of a wide range of housing projects” and “review the provincial building code” so as to make “housing construction less expensive.”

Khosrowshashi, whose company also donated nearly $1 million to the BC Liberals, made headlines in 2015 after Christy Clark’s BC Liberal government sold the developer land in Coquitlam $43 million below its appraised value.

Representing homeowners in one of Vancouver’s wealthiest neighbourhoods, the Shaughnessy Heights Homeowners’ Association recently released a list of its favourite candidates for the municipal election.

Surprise: they endorsed Sim and 10 city council candidates running with the NPA.

The SHHA says its top priority is to “select the best alternative to Kennedy Stewart,” the former Burnaby South MP running as an independent mayoral candidate, because he has a “complete lack of sympathy” for the concerns of wealthy homeowners.

What are their concerns? The group spends most of its time complaining about the BC government’s school surtax increase on properties worth $3 million or more. The tax was introduced to help pay for education in BC.

As a sign of how seriously they take this issue, SHHA member Robert Angus claimed that the taxes “have nothing to do with building a better society, any more than the race laws in Nazi Germany were designed to bring about a better society.”

When the SHHA asked Sim about the school tax, he told them he “opposed any tax based on asset values.” 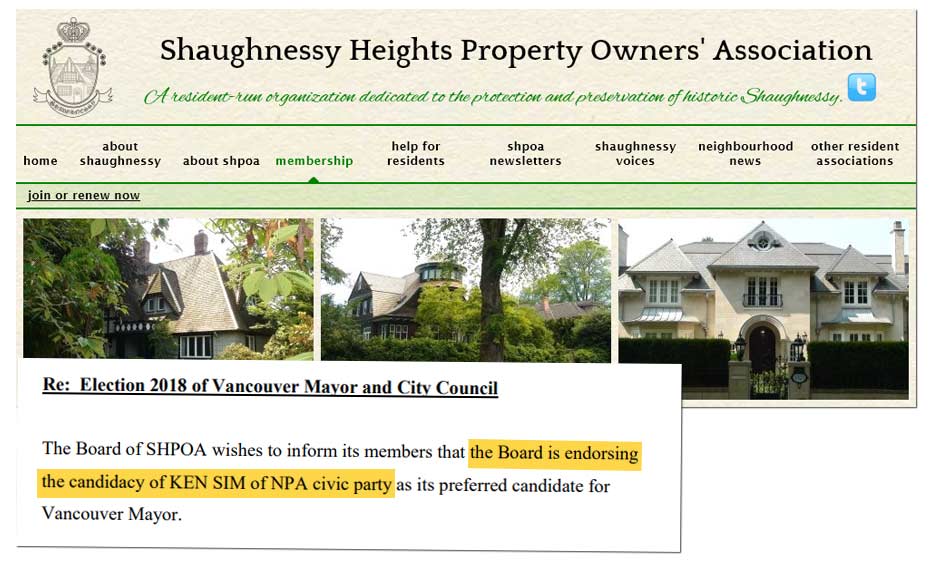 It turns out the upper-crust homeowners in Shaughnessy Heights received their list of approved candidates from a shadowy group called Wake Up Vancouver, which drew the attention of investigators at Elections BC last month by promoting anti-electoral reform ads without registering as a third-party sponsor.

The group campaigns against what it describes as the BC government’s “insatiable craving for your tax-paid savings” (provincial tax-rates in BC are actually some of the lowest in Canada) on behalf of concerned Kitsilano luxury homeowners.

The group’s leaders have been particularly angry about BC’s popular speculation tax, which was introduced to counter escalating rental costs in Vancouver.

The group also blames millennials for pushing their parents into debt:

How MILLENNIALS are HELPING their baby boomer PARENTS get DEEPER into DEBT.

Personal finance educator Kelley Keehn talks about how interest rate increases will affect debt in Canada and why helping your kids buy a house may be risky https://t.co/KD1OWhfM2V