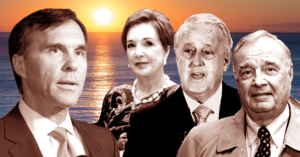 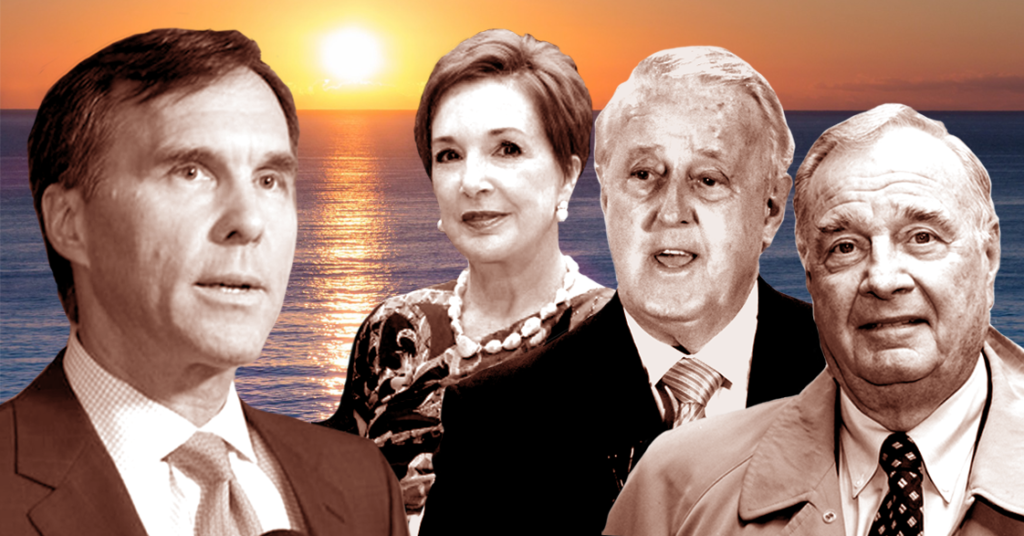 Some of Canada’s wealthiest and most powerful individuals seem to have a problem pitching in and paying for schools, hospitals and first-responders like the rest of us.

A new trove of leaked data from an offshore law firm based in the Caribbean include explosive details about a number of prominent Canadian political figures, including Justin Trudeau’s close adviser and chief fundraiser, billionaire Stephen Bronfman.

Fair enough, but Scheer and Kenney seem to be experiencing selective amnesia.

After all, under Stephen Harper’s Conservative government, Canada made it easier for money to flow offshore and the amount of Canadian money in tax havens skyrocketed dramatically: In fact, leaks of offshore tax data in recent years has exposed high ranking political figures from both of Canada’s establishment parties.

From the Panama Papers to the Paradise Papers, let’s scroll through a few prominent Liberals and Conservatives whose names have washed ashore in leaks from offshore tax havens:

According to reporting from CBC News and the Toronto Star, Bronfman and his company are linked to a “$60 million US offshore trust in the Cayman Islands that may have cost Canadians millions in unpaid taxes.”

CBC News additionally reported that a corporate law firm that had Bronfman as a client lobbied the government to kill legislation aimed at curbing the growth of offshore tax havens.

In a statement, Bronfman called himself a “proud Canadian” and said his offshore accounts “always fully complied with all legal requirements, including with respect to taxes.”

CBC News and The Star also reported Bronfman’s godfather, former Senator Leo Kolber, set-up an offshore trust in the Cayman Islands while he was serving as a Liberal Senator. The trust was also used by Bronfman’s family.

Kolber, as coincidence would have it, was also a client of the same Montreal-based corporate law firm that lobbied hard against offshore tax legislation at the same time as he served as chair of the Senate’s powerful banking and finance committee.

According to The Star, during his time as chair, Kolber took credit for persuading prime minister Jean Chrétien and finance minister Paul Martin to cut the capital gains tax.

Kolber’s lawyer says his client “always acted properly and ethically, including fully complying with all applicable laws and requirements.”

Speaking of which, three former Canadian prime ministers, Liberal and Tory alike, were also named in the Paradise Papers.

In fact, Canada Steamship Lines, a shipping empire once run by former Liberal Prime Minister Paul Martin, was revealed to be one of the “largest clients” of the offshore law firm at the centre of the leak. It has previously been reported that Martin’s company used tax havens while he served as finance minister in the 1990s and early 2000s. Martin left the company to his sons in 2003.

Here’s how Metro summarized the revelations about the former prime ministers:

“Mulroney sat on the board of Said Holdings, a Bermuda company controlled by Syrian-Saudi businessman Wafic Said. Said was a key intermediary in a British-Saudi oil-for-arms deal that led to a $400 million (U.S.) criminal fine for bribery in 2010 against British airplane manufacturer BAE.

Chrétien lobbied for an East African oil venture, which lists him as having received 100,000 options, the leaked records show. Chrétien confirmed he consulted for Madagascar Oil in 2007 but says he never received options.

Martin’s former shipping empire, Canada Steamship Lines, is one of Appleby’s “biggest clients,” according to a document in the leak. A written response from the company says that it complies with all “laws, rules and regulations of each jurisdiction in which they operate.”

The name of Canada’s finance minister also surfaced in leaked corporate records last year relating to his role as director of an offshore subsidiary registered in the Bahamas. As CBC News reported:

“Other prominent Canadian names in the data include Bill Morneau, who ran human resources outsourcing and consulting firm Morneau Shepell before becoming federal finance minister last fall. Morneau appears as a director of Morneau Shepell (Bahamas) Ltd., a subsidiary set up in 2014 for his company to consolidate its pension-consulting work in various Caribbean countries, including the Bahamas.

As required under the Conflict of Interest Act, Morneau resigned from Morneau Shepell and its Bahamian subsidiary last October before being sworn in as a minister.”

While Morneau formally stepped down from his roles at Morneau Shepell, he held onto one million shares in a company he regulated as finance minister, an apparent conflict-of-interest.

In response to the leak, Morneau Shepell stated that the company’s Bahamian subsidiary follows all  “applicable tax laws, internationally and within Canada” while Morneau’s office stressed “Minister Morneau is committed to ensuring that all Canadians pay their fair share of taxes” and noted Morneau “worked with the Ethics Commissioner to ensure all conflict of interest rules are followed.”

The name of Morneau’s Parliamentary Secretary also recently popped up in connection to an offshore entity registered in the Turks and Caicos Islands. As reported by the Journal De Montreal, a company owned by Liberal MP Francois Phillippe Champagne “transferred payments to one of its two shareholders through a company in the Turks and Caicos – a jurisdiction well known for offshore finance operations.” The report alleges Champagne approved some of those transfers. Days before the story broke, Champagne was promoting the Liberal government’s efforts to crack down on offshore tax avoidance.

Back in 2016, a CBC News, Radio-Canada and Toronto Star joint investigation found Conservative Senator Nicole Eaton, heiress to the Eaton department store fortune and a passionate critic of urban bicyclists, was a director of a Bahamas-based offshore corporation for 12 years. Eaton reported herself to the Senate’s ethics officer, explaining she “knew nothing ” of the offshore entity she was directing.

After the 2013 Offshore Leak, CBC News reported Liberal Senator Pana Merchant was listed as a beneficiary of funds connected to offshore accounts in Bermuda and the Cook Islands owned by her husband, high-profile lawyer Tony Merchant. CBC News said the Senator’s husband “moved nearly $2 million to secretive financial havens while he was locked in battle with the Canada Revenue Agency over his taxes.” The Senator and her husband say they never engaged in “unlawful conduct.”

Did we miss someone? Send a message to our tip line and we’ll update our list!