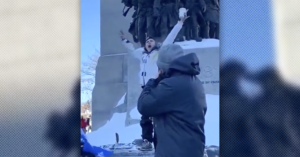 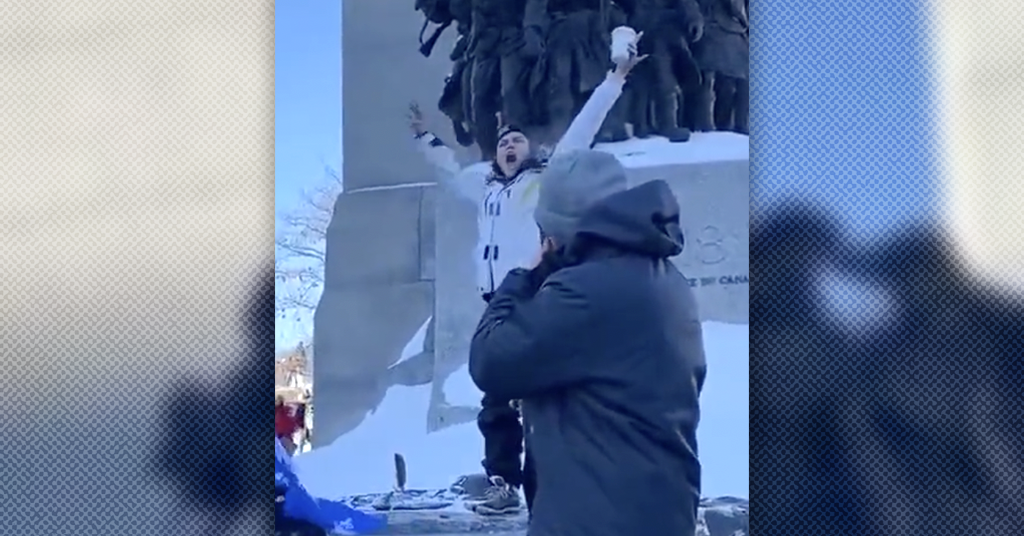 This article is more than 1 year old
NEWS

The head of the Canadian military, the Royal Canadian Legion and more are speaking out after participants in an anti-vax protest convoy were filmed dancing on the Tomb of the Unknown Soldier.

Over the weekend, a massive protest clogged-up downtown Ottawa as hundreds of vehicles associated with the so-called “Freedom Convoy” converged on the capital ostensibly to protest vaccine mandates. In reality, however, protesters expressed a variety of grievances against vaccines, masks and all public health restrictions.

Though it was billed as a “trucker” protest, many protesters showed up in Ottawa in pick-up trucks and small vehicles — often flying Canadian flags.

But despite wrapping themselves in the Canadian flag, unruly convoy protesters at the National War Memorial Saturday were spotted celebrating by climbing on top of the Tomb of the Unknown Soldier. 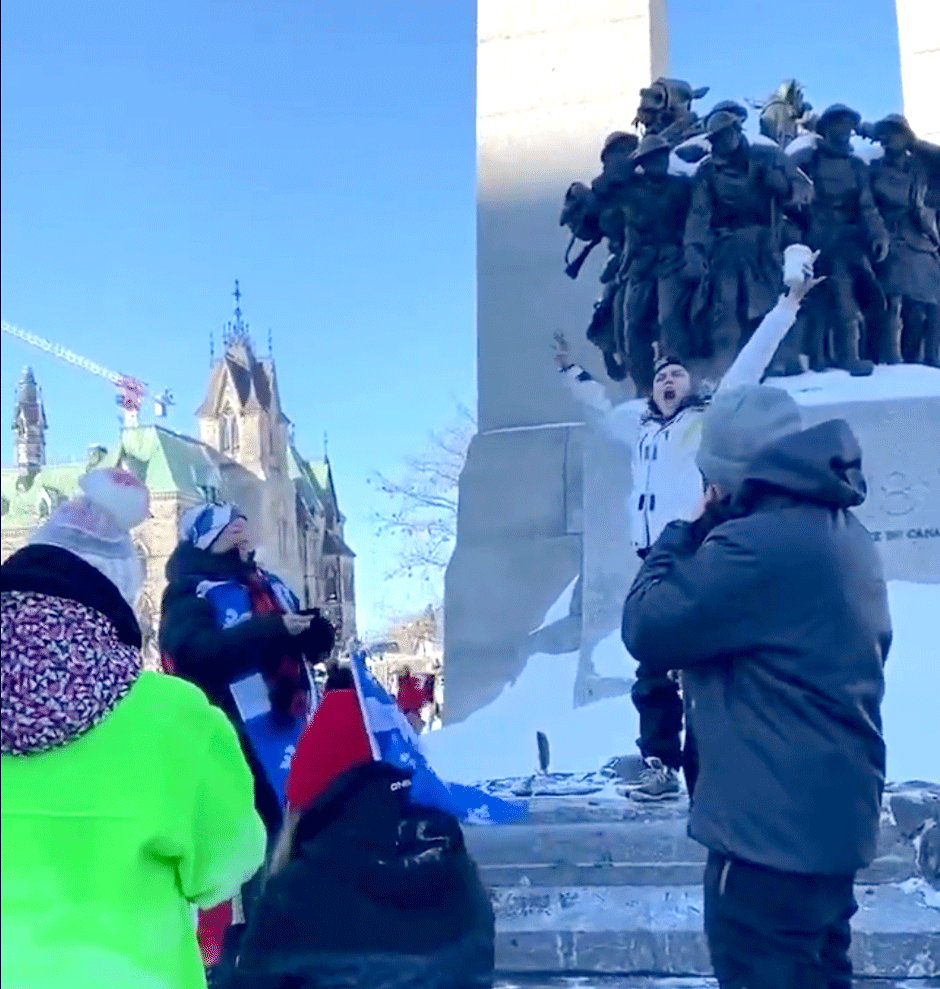 “I am sickened to see protesters dance on the Tomb of the Unknown Soldier and desecrate the National War Memorial,” said General Eyre in a tweet Saturday evening.

“Generations of Canadians have fought and died for our rights, including free speech, but not this. Those involved should hang their heads in shame.”

I am sickened to see protesters dance on the Tomb of the Unknown Soldier and desecrate the National War Memorial. Generations of Canadians have fought and died for our rights, including free speech, but not this. Those involved should hang their heads in shame.

Eyre’s comments were echoed by the Royal Canadian Legion, which issued a statement indicating the Legion also “strongly condemns” the convoy protesters.

“The Royal Canadian Legion strongly condemns the shocking actions of protesters who encroached upon the National War Memorial in Ottawa on Saturday,” the Legion said in its statement.

“They jumped on the Tomb of the Unknown Soldier and parked vehicles on the surrounding grounds.”

The Legion strongly condemns those who jumped on the Tomb of the Unknown Soldier and disrespected the National War Memorial on Saturday.

The site commemorates those who fought and fell for the very freedoms that allow the right to protest peacefully and respectfully. pic.twitter.com/3pDfD5zIjY

A video posted earlier in the day by a Twitter user showed convoy protesters drinking, dancing and celebrating on top of the Tomb of the Unknown Soldier.

The protesters were celebrating on the same spot where Corporal Nathan Cirillo was murdered by a gunman who later stormed Parliament Hill in 2014.

Cirllo had been guarding the Tomb of the Unknown Soldier at the time.

After explaining to these less than fine Canadians of the hallowed grounds upon which they trode, this was their reaction in the name of Freedom. Unsat! pic.twitter.com/Mk7VVLsfxo

Earlier in the day, protesters were spotted using the front steps of the War Memorial as a makeshift parking lot for over a dozen vehicles.

Ottawa Police later issued a statement indicating that “Several vehicles parked at the National War Memorial this morning and were immediately towed.”

“Cars are not allowed to park and people will not be allowed to desecrate the Memorial,” Ottawa Police added in their statement.

The cenotaph at the National War Memorial is a parking lot for protestors. pic.twitter.com/VpUqK29QOx

Conservative leader Erin O’Toole issued a statement Saturday evening distancing himself from the actions of the protesters at the War Memorial.

“The individuals desecrating these memorials should be ashamed,” O’Toole tweeted. “Their behaviour undermines the brave Canadians who have sacrificed for our country.”

O’Toole’s statement follows incidents in which Conservative MPs met with protest organizers who had called for violence. O’Toole himself met with convoy protesters only one day earlier while some of O’Toole’s MPs attended Saturday’s protest.

Today, I met with truckers heading to Ottawa. Truckers are our neighbours, our family, and most importantly, they are our fellow Canadians. 1/2 pic.twitter.com/Hl8ULjef5m

Ottawa Police and the City of Ottawa have fielded criticism from local residents over perceptions  authorities helped enable this situation by being too accommodating to convoy protesters, a number of whom were spotted flying Nazi Swastikas flags.

Queen Elizabeth Drive, one of the National Capital Commission’s scenic parkways that runs along the Rideau Canal, was shut down to traffic. The City of Ottawa is allowing protesters to camp out in their trucks over night next to residential areas.

Protesters also hung an upside down Canadian flag on a statue of Terry Fox and erected a sign with an anti-vaccine slogan, suggesting the man who ran halfway across Canada in support of cancer research is opposed to vaccine mandates.

There are some lines you don’t cross. pic.twitter.com/yG9Mg2k46v

In a statement, the Terry Fox Foundation said “Terry believed in science and gave his life to help others.”

Update: This story has been updated to include additional statements from the Royal Canadian Legion and Erin O’Toole.