Elizabeth May, leader of the Green Party, apparently had second-thoughts after she retweeted an anonymous Twitter account that suggested wearing blackface is not “something that actually matters.”

“Can we please, please focus on the nightmares of climate change as something that actually matters to the future of every single human,” tweeted an account named “resistant librarian.”

The anonymous account was referencing a tweet from CBC News that showed a photo of Liberal leader Justin Trudeau in blackface and suggested additional video footage may emerge.

A screenshot verified by PressProgress shows the Green Party leader amplified that tweet to her 320,000 followers.

Although the retweet appears to have been deleted sometime later, it continues to remain “liked” by Elizabeth May’s official Twitter account. In fact, several replies to the original tweet tagged May in their tweets, as well. 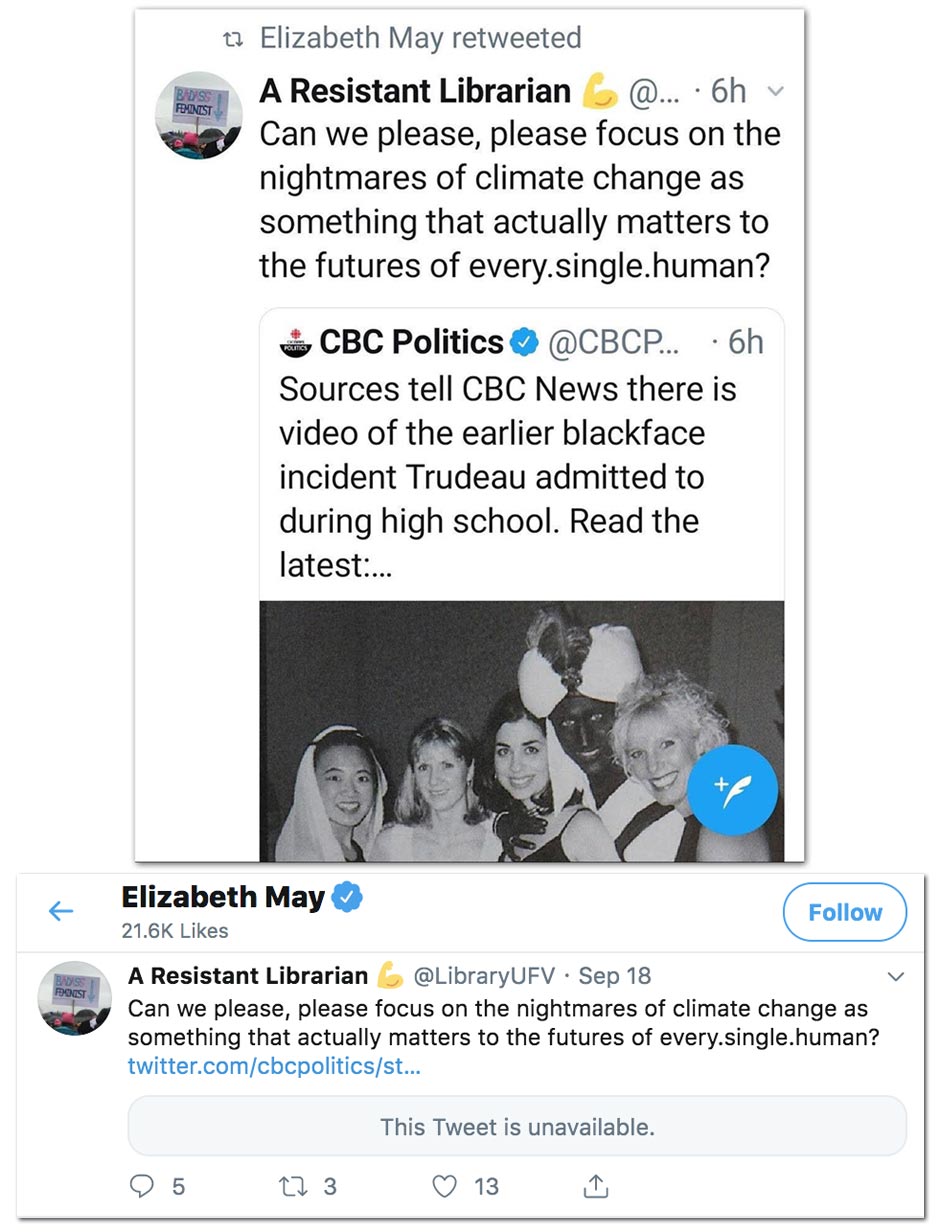 Green Party officials had nothing to say when asked to explain what point May was trying to make or why she later decided to quietly delete the retweet.

The retweet is seemingly at odds with an earlier statement from May indicating she was “deeply shocked by the racism shown in the photograph of Justin Trudeau.”

The fact that @ElizabethMay has been quoted saying that she hopes #TrudeauBlackface doesn’t take away from the real issues tells you everything you need to know about her own politics, and who her voters are #elxn43

Apparently Green is the new white, even Bernier’s PPC has more visible minority candidates. Sit down Liz, we see how important diversity is to you, look at your slate! There’s no climate justice without social justice & your hypocrisy part of the problem. https://t.co/oqgFIMDJB1

Racial justice and climate justice are inseparable. Too many Greens right now expressing versions of this sentiment. Who gets to decide what “actually matters”? #cdnpoli #exln43 https://t.co/ZwR2BowOxz

Yet the message May amplified isn’t exactly a one-off — and other prominent Greens have somewhat awkwardly reassured the public they take racism seriously.

After the photo of Trudeau in blackface surfaced in Time Magazine late Wednesday, BC Green leader Andrew Weaver sounded off on Twitter: “Let the person who has never done anything they regret in high school cast the first stone.”

Let the person who has never done anything they regret in high school cast the first stone. Silence. Enough said. This federal election campaign is in the gutters and I am disgusted.

Weaver was seemingly unaware Trudeau was a 29-year-old high school teacher at the time, rather than a teenage high school student.

There is no excuse for the racist behaviour shown by @justinTrudeau. The @BCGreens & I unequivocally condemn any act that mocks or minimalizes the past & present lived experiences of any Canadian. #bcpoli #cdnpoli 1/7

Celovsky caused much head scratching when urged Twitter users to “stop” talking about a Saskatchewan man who raised a Nazi flag above his house, demanding they “refocus on the priority — life on the planet.”

Predictably, the Bay of Quinte Green candidate is still riffing on the same themes, asking Canadians concerned about racism: “Can we stop this discussion?”

Can we stop this discussion?

We have a Climate Crisis. The money elite dictate everything.

If we saved our planet, can we bring us all with us?

By doing that, can we not decide to be the same? Human beings.

If not — maybe we should let the planet go.

On Thursday, Canada’s National Observer reported findings of a new survey looking at levels of diversity amongst candidates for Canada’s political parties.

While Statistics Canada data notes 25% of Canadians identify as a “visible minority,” only the NDP meets or exceeds this threshold (32%). The Liberals and Conservatives counted only 20% and 18% of their candidates as visible minorities.