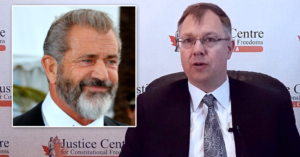 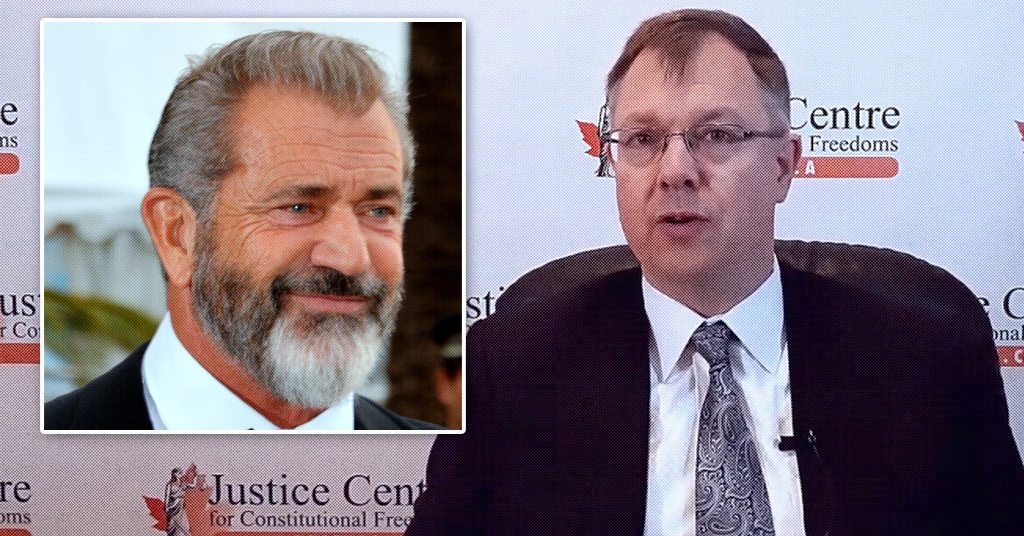 Justice Centre says it was “unaware of Mr. Gibson’s anti-Semitic remarks and his subsequent apology”

A right-wing “free speech” group with close ties to Alberta Premier Jason Kenney and other prominent Canadian conservatives is taking criticism over a Facebook post casting Hollywood actor Mel Gibson as a victim of political correctness.

Gibson infamously unleashed a barrage of anti-Semitic remarks during a 2006 drunk driving arrest, at one point declaring that “the Jews are responsible for all the wars in the world.”

“There is no excuse, nor should there be any tolerance, for anyone who thinks or expresses any kind of anti-Semitic remark,” Gibson later said in a public apology.

Despite his remarks, the Calgary-based Justice Centre for Constitutional Freedoms is now offering up Gibson as a victim of “political correctness.”

Presented as a “thought of the day,” the right-wing charity posted an inspiring quote purportedly from Gibson that suggests being unapologetically “politically incorrect” is virtuous. The quote also describes political correctness as “intellectual terrorism”:

“I am politically incorrect, that’s true. Political correctness is just intellectual terrorism. I find that really scary and I won’t be intimidated into changing my mind.” 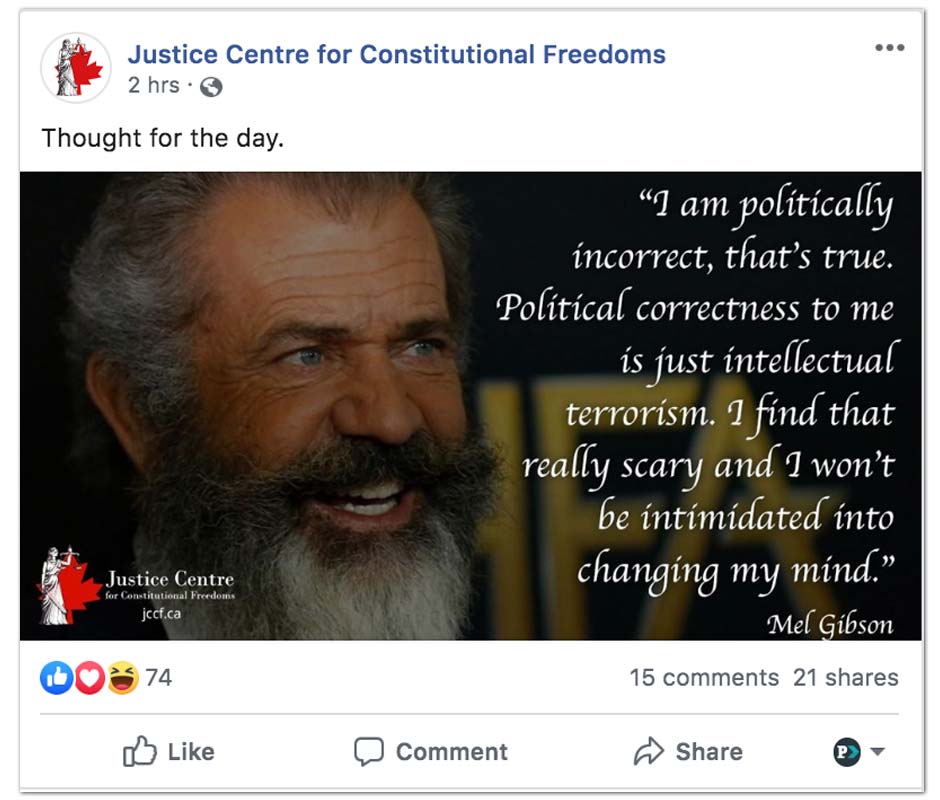 Comments on the Justice Centre’s Facebook post question why the “free speech” group used an “anti-Semite as an example of why political correctness sucks”?

“Interesting, using the quote of an admitted anti-Semite to prove a point,” remarked one of the Justice Centre’s followers.

“Yes, talking about the ‘Jewish conspiracy’ is politically incorrect,” added another. “As it should be.”

In a statement to PressProgress, Justice Centre President John Carpay stressed that Mel Gibson had publicly apologized in 2006 for his remarks and explained that one of his staffers had posted the meme “unaware of Mr. Gibson’s anti-Semitic remarks and his subsequent apology.”

“Obviously the Justice Centre meant no offence in posting the comment.”

Carpay did not respond when asked where his group found the Mel Gibson quote.

Although the unsourced quote can be found on a number of websites listing quotes from celebrities and historical figures, PressProgress could find no instances where Gibson is quoted by a legitimate publication having made those remarks.

Whatever the true source of the Mel Gibson quote, its language echoes rhetoric used by the far-right and can be found circulating in dark corners of the Internet.

The Justice Centre is a registered charity that bills itself as a “voice for freedom in Canada’s courtrooms” and says its “mission is to defend the constitutional freedoms of Canadians through litigation and education.”

According to the Justice Centre’s website, many of cases relate to social conservative causes, including cases representing anti-abortion groups, and groups that oppose Gay-Straight Alliances in schools.

In 2018, Carpay made national headlines after he compared the LGBTQ rainbow flag to the Nazi swastika.

The right-wing charity counts some big names among its backers.

In 2017, Alberta Premier Jason Kenney encouraged attendees of a Justice Centre event to donate money to the group, likening Carpay’s work to the work of civil rights icon Rosa Parks.