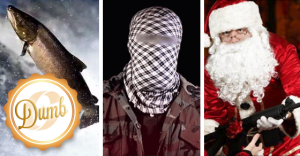 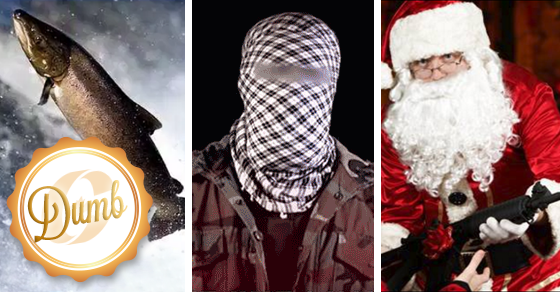 Let's all pause for a moment to reflect on some of the dumber Facebook memes we all scrolled past in our Facebook feeds this year, but may have already forgotten:

2015 will be remembered for many things.

Before marching forward into the year 2016, let’s all pause for a moment to reflect on some of the dumber Facebook memes from the Conservative Party of Canada and the wider conservative movement you may have scrolled past on your Facebook feed this year: Why it was dumb: In addition to helping amplify terrorist propaganda and needlessly feeding a sense of panic amongst the general public, as PressProgress was first to point out in March, this Conservative Party of Canada Facebook meme also appears to violate the Conservatives’ own blanket ban on “terrorist propaganda” in Bill C-51.

2. How many problems can you find in this meme? Why it was dumb: Not only did Alberta’s Wildrose Party misspell Premier Rachel Notley’s name, the meme also portrays a cargo ship (presumably transporting crude oil in containers) rather than a supertanker.

And while the image shows the ship sailing past Vancouver, the proposed Northern Gateway pipeline would actually lead to Kitimat, BC, a thousand kilometres or so north of Vancouver. Why it was dumb: Is Stand Up for Alberta run by fourteen-year-olds?

But what’s maybe more disconcerting is Wildrose MLAs keep showing up at this group’s events, with Wildrose MLA Rick Strankman going so far as to applaud the group’s “leadership.”

4. What every little boy and girl wants for Christmas: An AR-15 Why it was dumb: Nothing screams ‘responsible gun ownership’ like memes of Santa Claus doling out AR-15s to children, the same gun used in a number of recent high-profile American mass shootings.

The National Firearms Association, one of Canada’s biggest gun lobby groups, was active in pushing for Conservative changes to gun laws and has previously organized field trips to the shooting range for Conservative MPs. Why it was dumb: It may surprise you, but the photo in the meme displayed above is not, in fact, from an imaginary refugee camp along the Saskatchewan-Alberta border, but rather a real refugee camp in Ethiopia.

That attempt at comedy came to us by way of C2C Journal, an online publication sponsored by the Manning Foundation, the charitable arm of the Manning Centre.

Why it was dumb: Wildrose MLA Grant Hunter managed a rare feat for a modern politician: combining commentary on climate science with the evolution of women’s underwear.

7. So long and thanks for all the stock photos of British fish Why it was dumb: Attempting to highlight their steps to protect Pacific salmon, the Conservatives decided to use a photo of a British salmon swimming upstream, rather than salmon from British Columbia.

What you’re looking at is actually a picture of an Atlantic salmon photographed in Northern England. Why it was dumb: How do you bamboozle working Canadians into wanting to give millionaires a tax break? The Canadian Taxpayers Federation has a theory: float the idea it could help the Toronto Maple Leafs win a Stanley Cup.

Unfortunately, ESPN actually talked to NHL agents earlier this year, and they found some of the biggest motivating factors behind which team players sign with was a desire to play for a winning team, stable ownership, avoiding the media scrutiny that comes with playing in Canadian hockey markets, a “vibrant nightlife” and even nice weather.

Not one agent mentioned taxes as a motivating factor.

9. What a good bunch of salt-of-the-earth Canadians! Why it was dumb: Think the men in this Conservative Party meme are mining nickel in Northern Ontario or digging coal in Cape Breton?

10. It may not surprise you this Fraser Institute pie chart is wildly inaccurate Why it was dumb: Despite the Fraser Institute’s claims that Canadians spend “more on taxes than basic necessities,” their 42% number is wildly inflated because they include all kinds of business taxes in their so-called average Canadian family’s tax bill.

According to the same Statistics Canada data Fraser Institute cites in their study, Canadians spend 17.5% on income tax (a difference of 24.5%, compared to the number Fraser Institute offers).