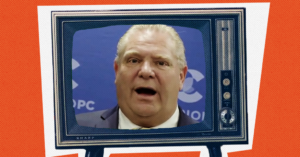 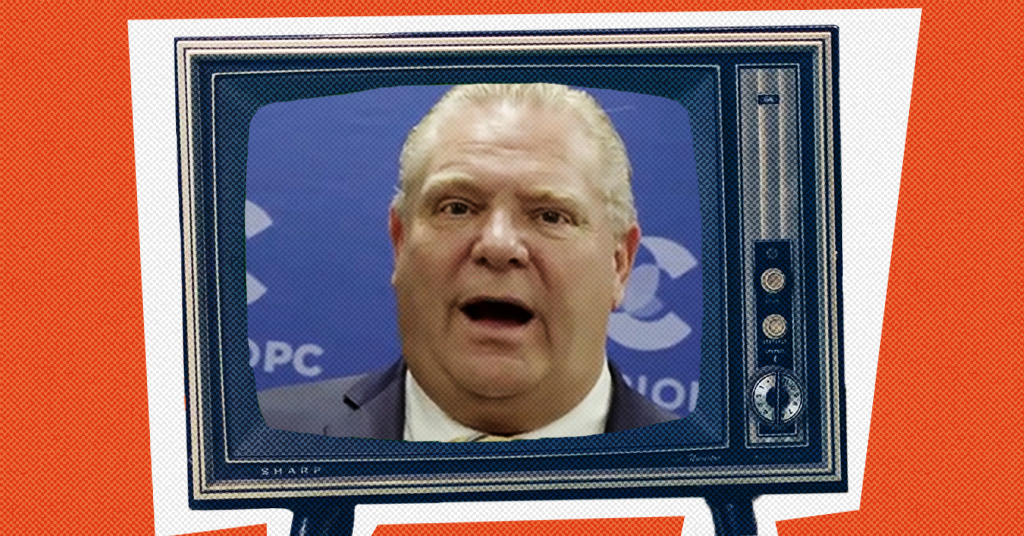 Doug Ford has launched a news channel that broadcasts non-stop positive stories showering himself with praise – and your family is paying for it.

At a time when Ford’s government is announcing steep cuts to schools, healthcare and assistance for the poor, running a taxpayer-funded propaganda outlet endlessly glorifying Ontario’s Premier might seem like a wrong priority to some.

In the first episode of ‘Doug TV’, news presenter Lyndsey Vanstone takes a “look back” at Ford’s first month in office, highlighting his appearance at several photo ops and bragging about a number of things Ford repealed (notably, Vanstone does not mention Ford’s repeal of Ontario’s sex-ed curriculum or his plan to gerrymander City Council wards in an attempt to rig Toronto’s upcoming municipal elections).

Premier Ford takes a look back at his first month in office. #onpoli pic.twitter.com/StxDTzKzSJ

The outlet’s social media accounts provide no indication of who produces the videos or link to any government website even though the Premier’s Office admits the videos are produced with taxpayer’s money.

The Office of the Premier of Ontario confirmed to PressProgress that the pro-Ford news channel is being produced with public resources through an arm of Ontario’s Legislative Assembly.

Since June, Vanstone has identified herself on LinkedIn as a “senior communications advisor” in the “Office of the Premier of Ontario.”

PressProgress reached out to the “Ontario News Now” news presenter for comment. A short while later, Vanstone’s LinkedIn profile was edited to indicate her position is “Deputy Director of Communications” for PC Caucus Services.

Neither Vanstone nor PC Caucus Services replied to questions from PressProgress requesting clarification about Vanstone’s job description and official duties. Following this spring’s election, Ford’s campaign manager Kory Teneycke suggested conservatives must create their own “forms” and “voice” in digital spaces due to their “lack of success” in traditional media.

Stephen Harper’s former communications director knows a thing or two about that topic – he used to run the now-defunct Sun TV and later had some involvement with Ezra Levant’s far-right Rebel Media.

While Teneycke and Ford might think “Ontario News Now” is a clever way to speak directly with supporters, others see it as a waste of tax dollars and reminiscent of North Korean state-run TV:

Is this state propaganda?

The campaign is over. This is the *premier’s* staff creating nakedly partisan advertising. I mean, it was clear PCs would eventually stoop down to the Liberals’ level, but I didn’t think it would happen this quickly

Ontario News Now is a Replica of Harper’s 24/Seven “Selfie Channel”
News all about YOU carefully edited by your staff (paid by taxpayers) to make you look good & important.
Harper is pulling Ford’s strings & whispering in his ear, same as he is to Scheer (his placeholder)