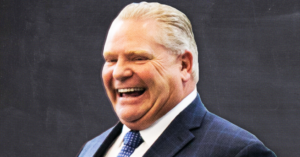 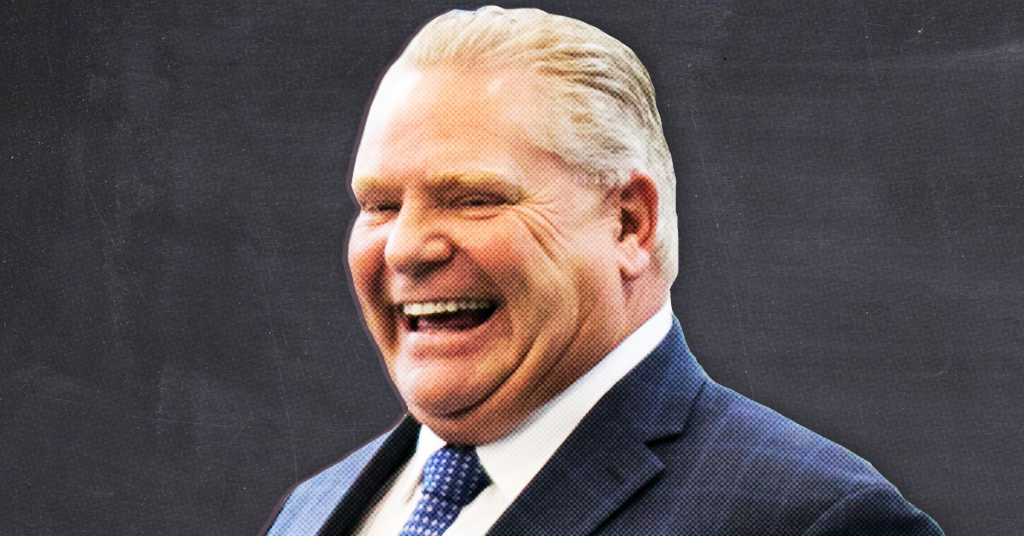 Doug Ford’s Progressive Conservative Government has announced plans to tighten qualifications for tuition grants, raise the amount of interest paid on loans and allow students to opt out of student unions.

And experts who’ve looked at the new rules say the details are even uglier.

“Under the previous government’s OSAP program, students could receive a grant equal to the average cost of an arts and science degree. Now, a portion of the funding they will receive will be a loan,” Ian McRae, policy coordinator with the Canadian Federation of Students, told PressProgress.

To this end, the government’s statement reads it will:

For second-entry students, the ratio of loans to grants will be set at a minimum of  50 per cent, the statement reads. For students with a family income below $50,000, significantly below the national median household income, will recieve a maximum of 82 per cent of their assistance as a grant. Students with family incomes above $140,000 will only receive repayable loans, CTV News noted.

“That means the best deal a second-entry student can get is a 50 per cent grant,” McRae said. Previously, first-entry and second-entry policies have been closely linked, he noted.

What does a higher ratio of loans to grants mean? “Students end up paying more for the same education,” McRae said.

The government’s statement reads, it will:

Align Ontario’s repayment terms with that of the federal government by charging interest during the six-month grace period, to reduce complexity for students.

Whereas, previously, students would have a period, after graduation to work and begin repaying their loans before interest accumulated, the Ford government is moving to scrap that.

NDP MPP Chris Glover, who wrote his PhD thesis on student debt in Canada and elsewhere, told PressProgress “Students are already racked with student debt. Most need a bit of time to find a job after they graduate. The Ford government’s decision to cancel the six-month grace period before student loan interest kicks in means students’ debts will start accruing interest on the day after they graduate. Ontario has the lowest per student funding, the highest tuition fees and highest student debt levels. That isn’t going to change. What is going to change is that students will be paying even more interest on their student debts.”

Erica Skaker, senior education researcher for the Canadian Centre For Policy Alternatives told PressProgress this means students will end up paying more, not less. “This change will put Ontario students in a position where debt loads will likely be higher. They may pay a little bit less now, but they’ll pay a lot more later – and because lower income families bear the burden of loan-based policy, this further entrenches inequality.”

To ensure transparency, choice and ease of decision-making, Ontario is introducing a plan to ensure non-tuition student fees are clearly communicated and give students choice regarding where their money is spent. Going forward, institutions will be required to provide an online opt-out option for all non-essential non-tuition fees.

“The effective ‘right to work’ style attack on student unions (by making fees voluntary) ensures that it will be harder for students to collectively oppose such regressive policy,” Shaker told PressProgress.

“These student organizations are an important part of providing essential services on campus and they provide cost saving services,” McRae said.

What’s more, he noted, the organizations’ role in fighting for free education, across the province and across Canada, makes it a pretty clear case of Ford trying to “thwart the student organizations that try to hold governments to account.”

“I think it is fair to say that students will definitely be feeling trapped between accumulating larger debt loads and graduating into an uncertain economy where recent workplace protections (including a higher minimum wage) were just repealed by the same government that has chosen to download more of the costs of higher education onto students. And it’s likely that for some the prospect of paying off even more debt just as they’re trying to start their careers and their adult lives in an insecure and more precarious world is an untenable choice,” Shaker told PressProgress.

“Ford’s scheme means there will be an increase in student debt beyond the levels that are already hurting students and graduates. Student debt is so crushing in Ontario, it’s forcing many to put off moving out of their parents’ home, and even forcing some to put off starting the family they want,” Glover told PressProgress.

PressProgress contacted the Office of the Minister of Training, Colleges and Universities for comment.  The office’s response was mostly unrelated to what was asked.  But, Stephanie Rea, the office’s director of communications, told PressProgress “Ontario’s Government for the People is making postsecondary education more affordable through historic reforms, refocussing support to families who need it the most, and empowering students to choose how their money is spent.”