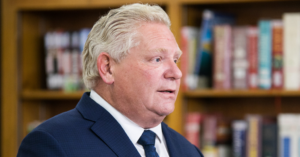 Ontario schools likely on track for $12.3 billion ‘shortfall’ over next decade

According to Ontario’s most recent budget, the province’s education system has seen a $1.3 billion funding shortage this year – apparently because Ontario schools didn’t hold enough bake sales during the last few waves of COVID-19.

The Ford government’s 2021–22 Third Quarter Finances budgeted to spend $30.8007 billion in base funding for schools and another $760 million in time limited funding. All told, the fiscal update offered Ontario’s education system $31.56 billion.

The budget itself claims one reason for this is because schools didn’t do enough “fundraising”:

“Education sector expense is projected to be lower primarily because school boards experienced a decline in non‐government revenue, from sources such as fundraising, community use of schools and international student tuition, and lower‐than‐projected enrolment. This results in a projected $1.3 billion decrease.”

Ricardo Tranjan, Senior Economist with the Canadian Centre For Policy Alternatives, said the slow funding is worrying as schools struggle to make up for learning time lost during lockdowns.

“Schools are under pressure to deliver more, make up for lost time, catch up with waitlists,”Tranjan said. “This requires more, not less funding.”

Ontario Secondary Schools Teacher Federation president Karen Littlewood told PressProgress the funding is having an impact on the quality of education in Ontario.

“We don’t magically have fewer students just because the government is cutting funding. In fact the cuts start with the education workers and support staff and there are reductions across the system, and students and their learning conditions suffer,” Littlewood said.

If this budget is passed, Doug Ford’s re-elected Progressive Conservatives would spend $32.4 billion on education in 2022-23 – a nominal increase of $2.9 billion or roughly 9%. However, as the Toronto Star notes, that includes $1.5 billion from the planned federal child care program – not towards K-12 education.

An OSSTF spokesperson notes the $32.4 billion budgeted for this year also includes $303 million in one-time COVID-19 learning recovery funding – which is explicitly labeled “one-time” for a reason.

Tranjan said it is “not likely” that spending will keep up with inflation.

OSSTF said the current spending plan, moreover, does not address the Financial Accountability Office’s warning that the system is facing long-term underfunding.

Last May, Ontario’s Financial Accountability Office predicted that based on the Ford government’s own predictions, the province’s education system will see a $12.3 billion “shortfall” over the next decade.