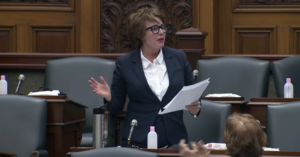 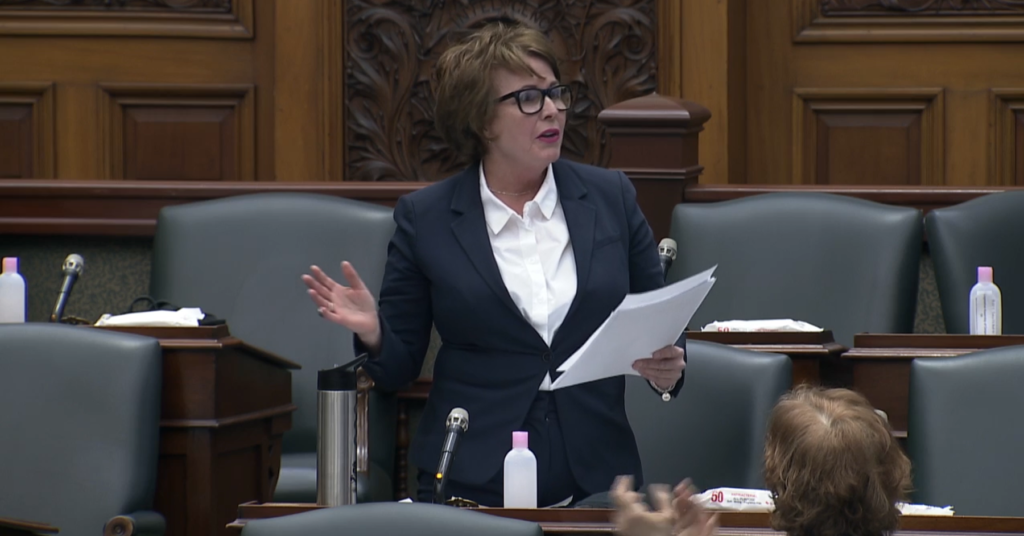 “We’ve all heard the children’s story of Chicken Little, where the chicken spreads baseless and exaggerated reports that the sky is falling”

On Wednesday, the Ontario PC government rejected a motion from the opposition NDP on Wednesday calling on Ford to “develop an essential workplace safety plan” aimed at ensuring workers are vaccinated and given paid sick days.

McKenna, the Parliamentary Assistant to the Minister of Labour and Ontario PC MPP for Burlington, rose to speak against the motion:

“We’ve all heard the children’s story of Chicken Little, where the chicken spreads baseless and exaggerated reports that the sky is falling, even though it wasn’t. There’s certainly a lot of misinformation about COVID-19 out there, and regardless of which side of this House you sit on, we all have a responsibility to tell the facts.”

McKenna proceeded to brag that Ontario has slightly fewer cases than the national average even though Ontario leads the country in total and active infections and hospitals prepare for worst case scenarios as ICUs approach capacity.

“Sick days are a vital issue,” McKenna later acknowledged and explaining this is why the province introduced COVID-19 emergency leave. That leave, however, is unpaid and only applies to workers who are isolating or following other infectious disease guidelines. It is also not the same thing as paid sick leave.

Ontario’s workers had the rights to two paid sick days under the Employment Standards Act until the Ford government eliminated those rights, soon after the 2018 election.

Medical experts have warned that a lack of paid sick days is forcing many people to go to work when they’re sick or symptomatic, risking greater community spread.

“If you’ve ever played poker, you know that you should never show your hand to anyone while playing, but that’s exactly what Ontario’s NDP did. By making paid sick days a provincial issue for their partisan gain, the NDP eliminated the need for the federal government to fix the national paid sick day program. It’s hard to understand why the Ontario NDP decided against protecting all Canadian workers with a strong national paid sick day program. Instead of getting angry with me for pointing this out, the leader of the official opposition should apologize to Ontarians—and, for that matter, to all Canadians—for letting the federal government off the hook on paid sick days.”

Other members of the Ontario PC party caucus have expressed some willingness to introduce some form of sick leave legislation in Ontario.

On Thursday, Ford suggested his government was “working” on sick leave, but provided no details.

Ford has not had a good week, with growing calls for his resignation and polls showing his approval ratings plummeting amid a botched third wave lockdown.

#Analysis: If Ontario Premier Doug Ford is defeated in next year’s provincial election, he might look back at this past week as the beginning of the end for his government. https://t.co/AUjGrrgzW3 @EricGrenierCBC

Over the weekend, an unprecedented turn of events followed Ford’s decision to grant police blanket powers to arbitrarily stop and interrogate anyone found outside their home at any time of day in an effort to enforce public health regulations. By Monday, the government had reversed the decision.

Ford has also ignored calls from health experts to bring in less draconian measures, including paid sick days and prioritizing support for essential workers, to control the spread instead.