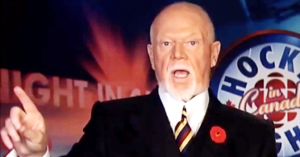 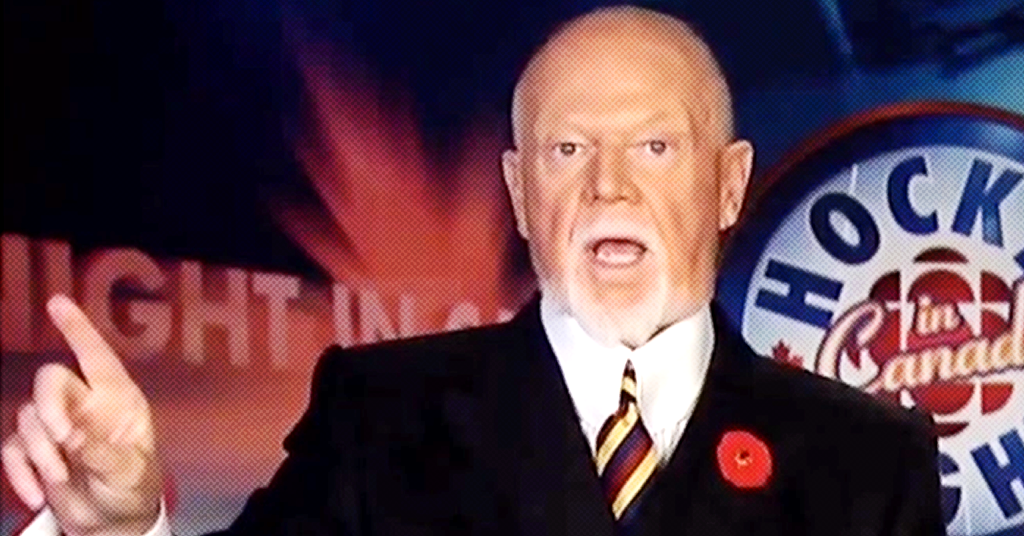 Don Cherry supporters commemorated Remembrance Day this year by denouncing the Royal Canadian Legion after the veterans’ organization disavowed itself of Cherry’s “hurtful” and “divisive” views on immigrants.

Some even suggested they will stop buying poppies on Remembrance Day altogether to show their solidarity with the disgraced broadcaster.

Cherry, an iconic but controversial personality who had hosted Coach’s Corner since 1982, was fired by Sportsnet following an on-air rant during Hockey Night in Canada last weekend that saw the broadcaster rail against immigrants for not wearing poppies — an allegation for which Cherry provided no evidence and later refused to walk back.

“I don’t regret a thing,” Cherry told the Toronto Star.

Cherry admits he “could have stayed if I had wiped the floor with myself and returned as a tamed person,” but said he didn’t “feel that the people who watch Coach’s Corner deserve something like that.”

Cherry’s firing was immediately co-opted by right-wing media culture warriors who attempted to portray Cherry’s refusal to take any responsibility for his own actions as an example of “cancel culture” and the “Left’s war on free speech.”

Don Cherry is a casualty of the Left’s war on free speech and imposition of political correctness into every facet of society – even sports, which used to reject this nonsense. Sportsnet is just like the rest of the mainstream Canadian media companies – opinions not welcome.

While Cherry continues to use his advocacy work on behalf of the Royal Canadian Legion to justify his anti-immigrant tirade, even the organization responsible for overseeing Remembrance Day poppies has distanced itself from Cherry’s views.

“Mr. Cherry’s personal opinion was hurtful, divisive and in no way condoned by the Legion,” the Legion said in a statement Monday evening.

1/2
Mr. Cherry’s personal opinion was hurtful, divisive and in no way condoned by the Legion. We do remain appreciative of his passionate support for Veterans.

We know many new Canadians understand and welcome the tradition of the red poppy and will continue to educate all citizens about the significance of this powerful symbol.

A Legion spokesperson told PressProgress they issued the statement after they were contacted by “many media and members of the public” about Cherry’s comments.

“It was important to make it clear that the Legion does not condone what was said,” the spokesperson said, but added: “at the same time, we appreciate Mr. Cherry’s ongoing and strong support for Veterans.”

Nonetheless, that didn’t stop the Legion’s Facebook page from being flooded with comments from supporters sympathetic to Cherry’s anti-immigrant views, with some declaring they would not renew their memberships or make donations to the Legion.

Among those spotted bashing the Legion was a former candidate for the far-right Canadian Nationalist Party, a “white nationalist” political party that was kicked out of a Legion hall in Saskatchewan earlier this year for violating the Legion’s anti-hate policies.

We’ve now reached the performative outrage portion of our program, where “patriots” lambast the Legion for their position. On Remembrance Day. ? pic.twitter.com/rMn9eLko3a

The Legion’s statement was particularly demoralizing for right-wing Twitter trolls who had been tweeting in support of Cherry’s anti-immigrant tirade under the #DonCherryIsRight hashtag.

Many right-wing supporters of Cherry chose to direct their outrage at the Royal Canadian Legion — even though it was still Remembrance Day:

I am 79 & have bought several poppies every year. But if you are giving into the liberal anti-free speech & anti-Canadians then I have bought my last.

I guess I won’t be buying a poppy next year.

https://t.co/Sh1OemE83T The legion is supposed to stay out of politics. This is ridiculous and will hurt their donations. I’m not into cancel culture but whoever is running this Twitter account needs to delete these statements. #BoycottSportsnet

Don’t expect me to get a Legion membership now https://t.co/JAswIIk7aA

I had the misfortune of meeting the Legion executive a couple years ago.Their Executive Director and other senior staff were typical left wing government types that have little knowledge of who veterans are & the price they paid. In other words the Legion has been infiltrated.

Wow, I really don’t want to have to re-evaluate my support of the Canadian Legion but you are making it very difficult not to, with this statement!

why buy a legion membership? They backed up Sportsnet and threw Cherry under the bus too.

I just tore up my Legion membership. Im not an active member but they were on my donation list due to my dad, Grampa, father-in-law, uncles. I donated generously. Not any more! #IStandWithDonCherry #supportDonCherry