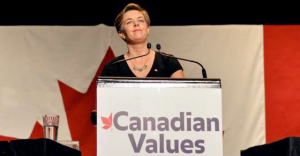 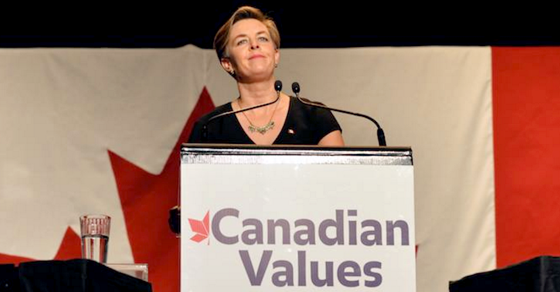 Anti-immigrant fear mongering has gotten Kellie Leitch lots of attention, but it hasn't done her poll numbers any favours.

Anti-immigrant fear mongering has gotten Kellie Leitch lots of attention, but it hasn’t done her poll numbers any favours.

The Conservative leadership candidate has been grabbing headlines the last few months talking about her controversial “anti-Canadian values” test – that’s an ideological purity test for immigrants cribbed from Donald Trump.

The plan has been denounced by quite a few people, including her party’s interim leader as well as Leadership rivals who’ve described it as “dog-whistle politics” and “very un-Canadian” – social conservative leadership contender Brad Trost suggested he’d likely fail Leitch’s “anti-Canadian values” test too.

And just like Trump, Leitch – a surgeon and former cabinet minister who earns a $170,400 salary – claims everybody criticizing her xenophobic publicity stunts are “out-of-touch elites.”

One thing no one will dispute is Leitch’s Trump impersonation has generated heaps of media attention.

An analysis by PressProgress looking at Canadian media coverage of the Conservative leadership race so far shows Leitch has easily commanded more attention than any of her rivals.

Since the first leadership candidate declared their intent to run on April 6 until October 21, Leitch has generated 1,349 news stories about herself, about 200 more than her closest rival – Maxime Bernier (1,160 stories). Although it can fuel resentment towards marginalized groups and result in violence, Leitch’s rhetoric is frequently portrayed in dispassionately pragmatic terms.

And according to some, that means this kind of coverage should translate into increased support.

In September, one pollster predicted Leitch’s ideological purity test would be a game changer in the race to replace Stephen Harper:

“This race has now been blown wide open … It appears that the fortunes of Kellie Leitch have risen from the ashes in her bid to become the next leader of the Conservative party.”

The Globe and Mail described the brains behind Leitch’s plan as a “shrewd strategist,” expertly establishing Leitch as the “dominant voice in the Conservative leadership race.”

One former adviser to Toronto mayor John Tory claimed Leitch’s efforts to troll the media was a brilliantly effective strategy:

Macleans’ magazine even dedicated a cover story to figuring out “how Kellie Leitch touched off a culture war” last month.

Yet a new poll released Friday shows Leitch continues to dwell in the basement of the the Conservative leadership race.

According to Abacus Research, despite extensive media coverage, Leitch’s “shrewd” strategy has left her sitting in a three-way tie for seventh place in the crowded Conservative field.

“Kellie Leitch has probably won a larger share of coverage than any other candidate to date, however, she is the favourite of just 4% of Canadians.” Another recent poll places Leitch fifth in a field of eight candidates.

One reason for the mismatch between heavy media coverage and bad polls could be because there is, in fact, such a thing as bad publicity – and Leitch is getting absolutely hammered by it.

Analyzing media coverage of the debate Leitch has sparked on “anti-Canadian values” shows that coverage has been overwhelmingly negative, considered a barometer of how people and ideas are being perceived.

Less than one-quarter (23.5%) of media coverage has discussed the idea using neutral language while only one-tenth of the coverage has described Leitch’s ideological purity test in positive terms.

So while there might be method to Leitch’s madness, it’s not clear doing a bad Trump impersonation is a particularly good method.

If it was, why would Leitch’s poll numbers be this awful right now?