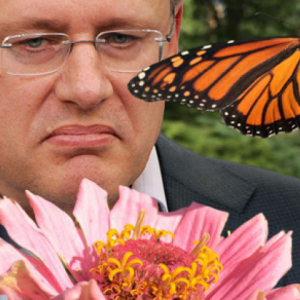 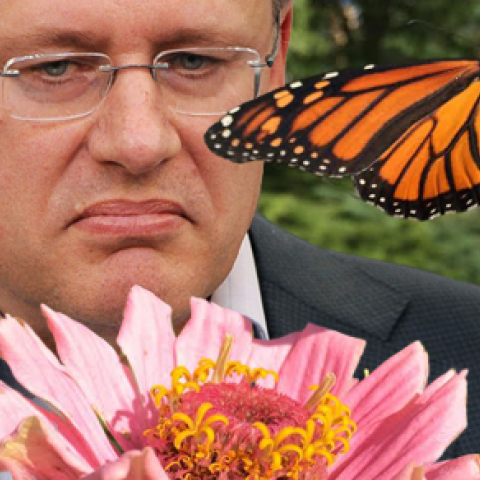 Who cares about a bunch of owls — or monarch butterflies — when we’ve got acres of forest that need clear cutting? Hot off the heels of calling for a rollback of “unnecessary” child labour laws, the right-wing Frontier Centre for Public Policy is now turning its attention to Canada’s endangered species laws ahead of […]

Who cares about a bunch of owls — or monarch butterflies — when we’ve got acres of forest that need clear cutting?

Hot off the heels of calling for a rollback of “unnecessary” child labour laws, the right-wing Frontier Centre for Public Policy is now turning its attention to Canada’s endangered species laws ahead of the federal election — calling “for root and branch reform.”

“We are told that many millions of acres must be set aside for conservation purposes, and economic activity stilled,” writes Frontier Centre research fellow Elizabeth Nickson. “This has happened across Canada’s sparsely populated rural areas, especially where resource, industrial or business activity takes place.”

And why’s that? Well, Nickson, a former National Post columnist, and more recently the author of the book Eco-Fascists: How Radical Conservationists Are Destroying Our Natural Heritage, believes endangered species science hasn’t been “contested vigorously” and “the numerous failures of endangered species regulations in Canada have not been reported.”

But she also applauds the Harper government for not getting “on board... the train” towards unnecessary habitat protections that “curb economic activity.” Little wonder then that the Conservatives endangered species’ policies have come under criticism in the last three months — both at home and abroad.

For her part, Nickson dismisses the “hailstorm of criticism … being launched against the Harper government’s failure on environmental issues.”

To make her case for policy reform, Nickson argues that “only 5 continental mammals and 6 birds have gone extinct” in the entire world over the last 500 years — something she calls a “harsh” reality for enviornmentalists.

Yet one of her own sources for these numbers includes a disclaimer pointing out species identified as “extinct” are “likely to be a significant underestimate” from the real number of extinct species due to a lack of survey data to definitively confirm their extinction.

Of course, even extinction data misses the point: the list of endangered species is the real problem.

You can’t do much for a species once it’s gone.

Here’s what Nickson’s source, the UICN Red List, offers in terms of extinct, critical, endangered and vulnerable species (above) and a breakdown of threatened species by taxonomic group (below) in Canada alone:

Nickson also writes that “the authoritative Nature magazine” published an essay on the effects of climate change on endangered species which said “it was increasingly clear” that climate change will not cause a “species reduction of between 11 and 37 percent.”

But that isn’t exactly what Nature said.

While Nature does say “uncertainty prevails” and notes the challenges , they also point out “researchers have so far sampled only a sliver of Earth’s biodiversity, and most of the unknown groups inhabit small regions of the world, often in habitats that are rapidly being destroyed.” But from what they can establish with reasonable certainty:

“Among the groups that can be assessed, amphibians stand out as the most imperilled: 41% face the threat of extinction, in part because of devastating epidemics caused by chytrid fungi. Large fractions of mammals and birds face significant threats because of habitat loss and degradation, as well as activities such as hunting.”

And as for climate change:

“The effects of climate change, which are hard to forecast in terms of pace and pattern, will probably accelerate extinctions in as-yet unknown ways. One simple way to project into the future would be to assume that the rate of extinction will be constant; it is currently estimated to range from 0.01% to 0.7% of all existing species a year. “There is a huge uncertainty in projecting future extinction rates,” says Henrique Pereira, an ecologist at the German Centre for Integrative Biodiversity Research in Leipzig.

At the upper rate, thousands of species are disappearing each year. If that trend continues, it could lead to a mass extinction — defined as a loss of 75% of species — over the next few centuries.”

The Harper government’s track record with endangered species has come under repeated fire recently. A study released late November showed that 86% of Canada’s legally-protected species have remained at the same risk level — or have seen their fortunes decline — over time, putting “biodiversity in Canada at risk.”

On the international stage, in December it was revealed that in Canada opted out of almost every resolution to protect endangered species at a meeting of the Convention on International Trade in Endangered Species in 2013.

Meanwhile, it looks like Nickson and the Frontier Centre for Public Policy have at least some allies in reform. The Canadian Association of Petroleum Producers has asked the government to weaken aspects of Canada’s Species at Risk Act, according to documents PressProgress obtained through access to information.