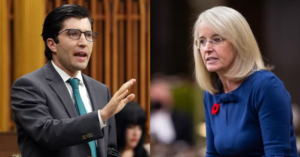 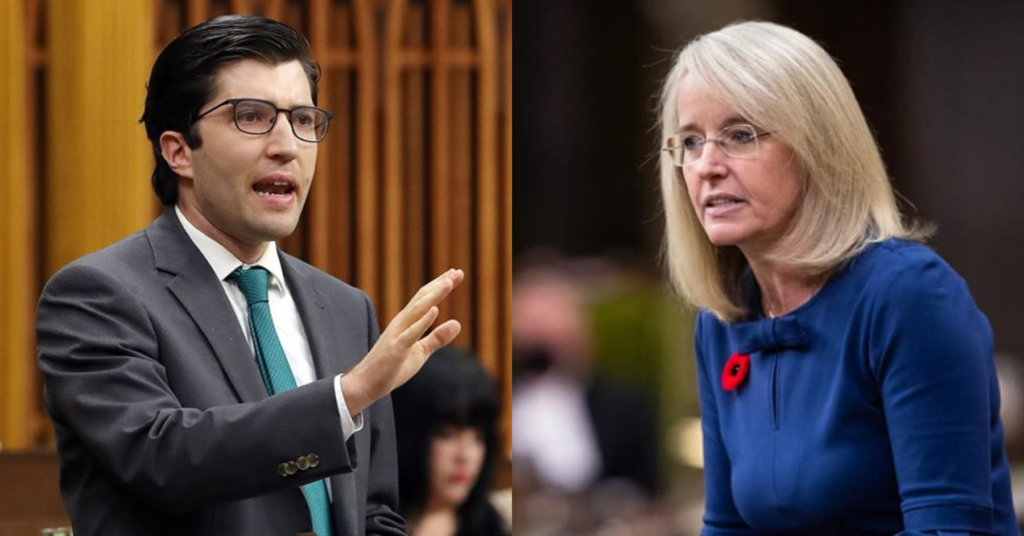 Two of Erin O’Toole’s Conservative MPs are behind a video criticizing anti-conversion therapy legislation that features a youth evangelist who claims counselling helped him overcome his interest in gay “pornography” and “going to gay bars.”

Conservative MPs Garnett Genuis and Tamara Jansen produced a video that appears on a website called “Fix The Definition” promoting a petition calling for changes to Bill C-6, federal legislation that would make it a criminal offence to coerce minors into or profit from programs aimed at changing people’s sexual orientation or gender identity.

The campaign, launched by Genuis last year, claims a ban on conversion therapy would actually “discriminate” against LGBTQ people by restricting access to “professional or spiritual support” to “limit” their “sexual behaviour” — or “de-transition.”

The end credits of the video that appears on the campaign website  indicates that it was “produced by the Offices of MP Garnett Genuis and MP Tamara Jansen.”

Neither MPs addressed questions from PressProgress seeking clarification as to whether the video was produced using any public money from their MP’s office budget.

House of Commons records show a few months earlier, Genuis’ office listed a $131 expense at Vistek for “video communication and broadcasting equipment” — a rate that roughly corresponds with Vistek’s listed prices for day or weekend rentals of some high-end video cameras and other equipment. 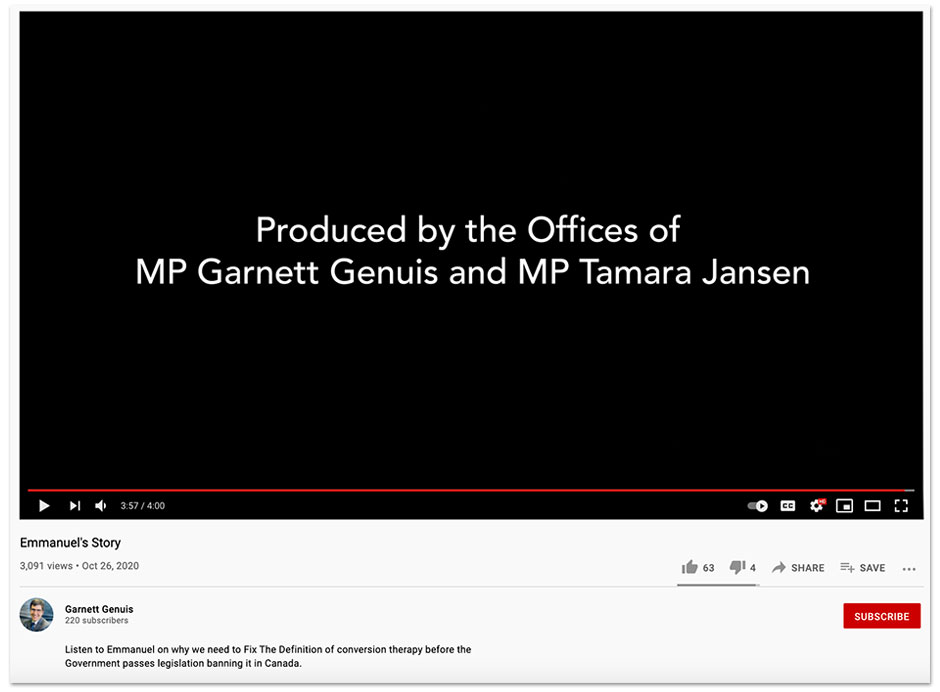 The video itself features United Youth Outreach “evangelist catalyst” Emmanuel Sanchez, who introduces himself as an ordinary Calgarian who enjoys taking walks in the woods, loves eating pizza and plays card games with friends.

“I grew up in a loving family and I dreamed of raising a family of my own one day,” Sanchez says. “But ever since I was a kid, I remember feeling attracted to the same gender.”

“I started watching pornography” and “going on chat rooms,” Sanchez continues, adding that by the age of sixteen, he had even started “going to gay bars.”

That, Sanchez says, continued until a religious leader gave him “advice about sexual behaviour” and “counselled me in ways I personally wanted him to challenge my behaviour.”

Genuis and Jansen’s video ends with Sanchez issuing a bleak warning about what could happen if Bill C-6 becomes law:

“If professionals don’t feel free to have conversations with people that might challenge their behaviour, their identity or their assumptions, then I wouldn’t have been able to get the counselling I needed from my mentor who I freely sought out.”

“There is no legitimate basis for these concerns,” Wells told PressProgress. “All conversion therapy prohibition laws in Canada support access to non-judgemental counselling. Bill C-6 would not restrict any appropriate and professional conversations between a counsellor and client of any age.”

The star of Genuis’ video is also a social conservative activist.

Sanchez previously spoke at a seminar hosted by an anti-LGBTQ group called Free To Care alongside a representative from the social conservative political action group Association for Reformed Political Action (ARPA) and a failed Conservative nomination candidate Ann Gillies, who later ran with the People’s Party and is now involved with groups called “Take Back The Rainbow” and “Restoring the Mosaic.”

In his speaker bio, Sanchez describes himself as having “received counselling for his unwanted same-sex attractions when he was a minor.”

Sanchez and Free To Care communications director Jose Ruba are elsewhere jointly described as having “called several counselling agencies in Calgary to find help to ‘reduce non-heterosexual behaviour or attraction’ such as gay pornography use.'”

Sanchez declined to answer questions from PressProgress about the production of the video and whether he was paid for his appearance. 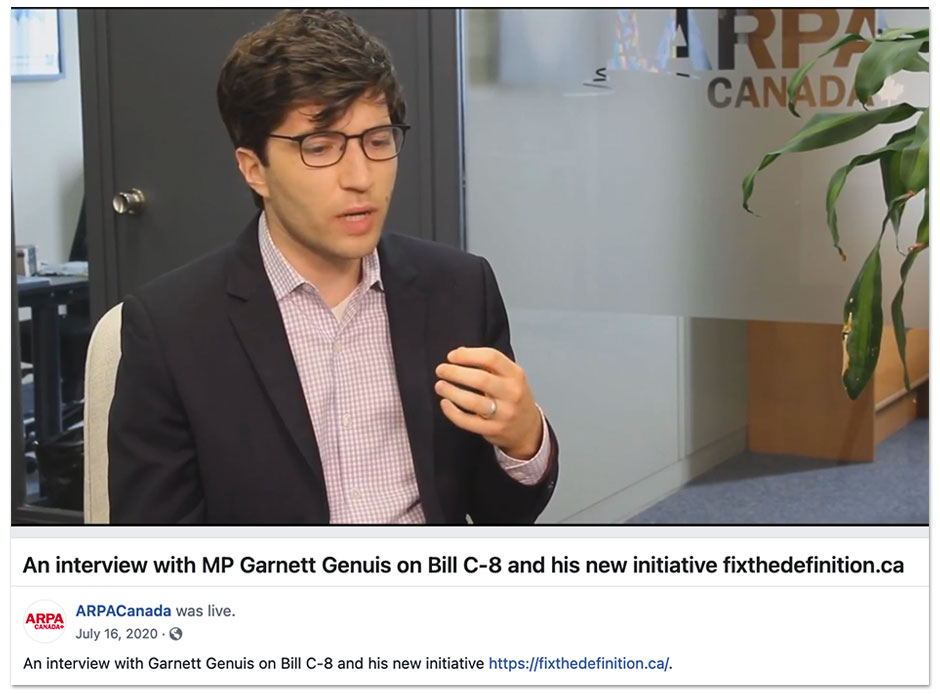 “This anti-LGBTQ2 movement is rapidly growing, connected, and well-funded,” Wells noted. “The same choreographed speakers often appear at any public hearing on conversion therapy prohibition laws in Canada. Their tactic is to try and create confusion and doubt about the intended purposes of the proposed legislation.”

“It is disappointing that Members of Parliament would promote such blatant propaganda and disinformation.”

The Conservative Party of Canada did not respond to requests for comment from PressProgress about whether it endorses the views expressed by Genuis and Jansen’s video.

Likewise, Genuis told PressProgress the video — which extols the benefits of seeking professional counselling to “question” and “challenge” gay “behaviour” — is “consistent” with his past statements about opposing conversion therapy:

“I have been consistent and public in calling on the government to fix the definition in Bill C-6 and ban conversion therapy. The answers to all of your questions are clearly available in the speeches that I’ve given on this topic, including my firm conviction that conversion therapy should be banned.”

Last October, Genuis abstained on a second-reading vote on Bill C-6. In his local newspaper, Genuis claimed that Bill C-6 could criminalize “private conversations” between a “parent or mentor” and gay teenagers.

The debate on Bill C-6 has seen a number of Conservative MPs make headlines wading into topics of sex and gender: