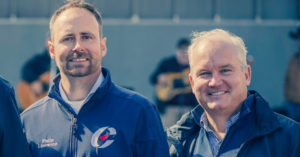 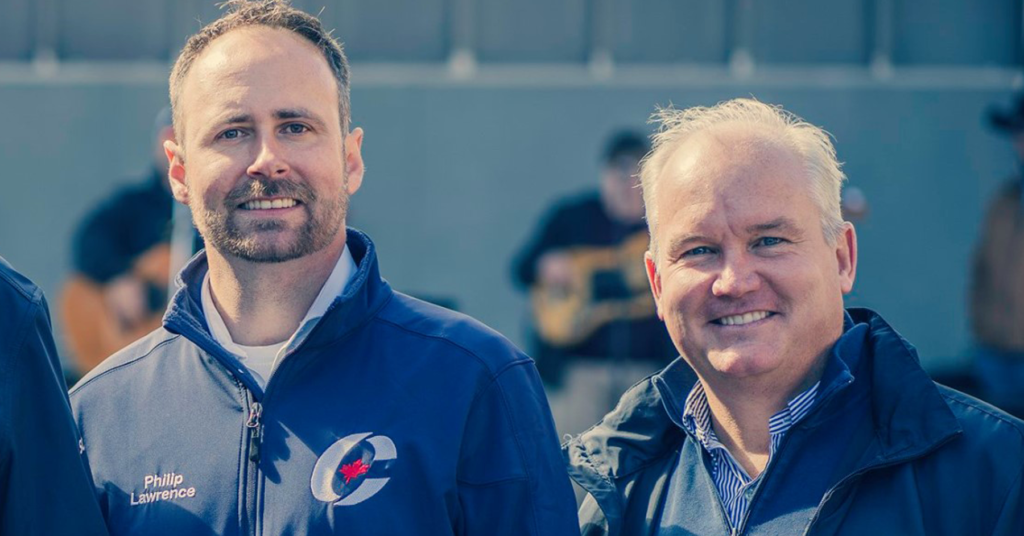 One of Erin O’Toole’s Conservative MPs presented a petition opposing proposed legislation outlawing anti-LGBTQ “conversion therapy” initiated by a far-right pastor who has called on Christians to “disobey the government” if the bill becomes law.

The legislation would also ban advertising or profiting off conversion therapy.

The petition, sponsored by Ontario Conservative MP Philip Lawrence, calls on the House of Commons to amend Bill C-6 to allow faith leaders, pastoral counsellors, school officials, parents and others to intervene with “persons struggling with their sexual orientation, sexual feelings or gender identity.”

According to House of Commons website, the petition was initiated by Cobourg, Ontario pastor Chad Houghton of the Fellowship Baptist Church. 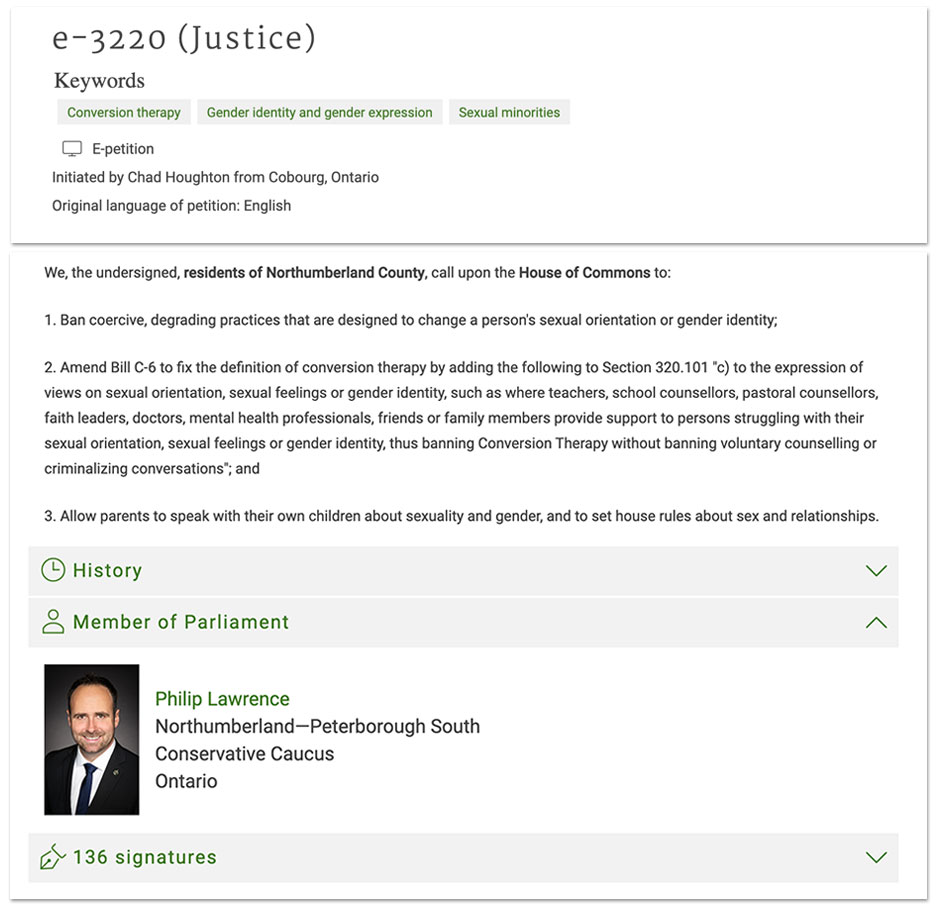 On the church’s blog, Pastor Houghton compares conversion therapy to COVID-19 public health restrictions and questions whether Christians should comply with the laws of secular authorities when they are at odds with “God’s Word”:

“Over the past several months these passages have been heavily debated among pastors as we have considered what the church’s response should be to our government lockdowns. At FBC, we have decided that compliance is not in violation of God’s Word. To comply does not cause us to do something God would forbid, nor does it force us to stop doing something we should be in a way that would disqualify us from being obedient to God’s Word … However, that is not the case as it comes to a Bill that is currently before our government, Bill C-6 – The Anti-Conversion Therapy Bill. While on the surface this Bill only seems to prevent the unvoluntary forcing of individuals to conform to the Judeo-Christian ethics around gender, the Bill has elements in it that will greatly affect the church and our ability to parent as Christians … Should this Bill pass, it would give grounds for authorities to try to limit the scope of discipleship. So, what are we to do?”

Houghton’s blog, which suggests Bill C-6 is a risk to “same-sex attracted Christians” and those secretly “watching gay pornography,” concludes that if Bill C-6 becomes law, then Christians must prepare for civil disobedience:

“We should prepare ourselves. If this Bill is to pass, I believe this is an area where to honour God we will be forced at times to disobey the government, regardless of the consequences.”

Neither Houghten nor Lawrence responded to requests for comment from PressProgress.

Lawrence, who also signed the petition, has previously hosted pancake breakfasts at Houghton’s church in his capacity as a Conservative MP. 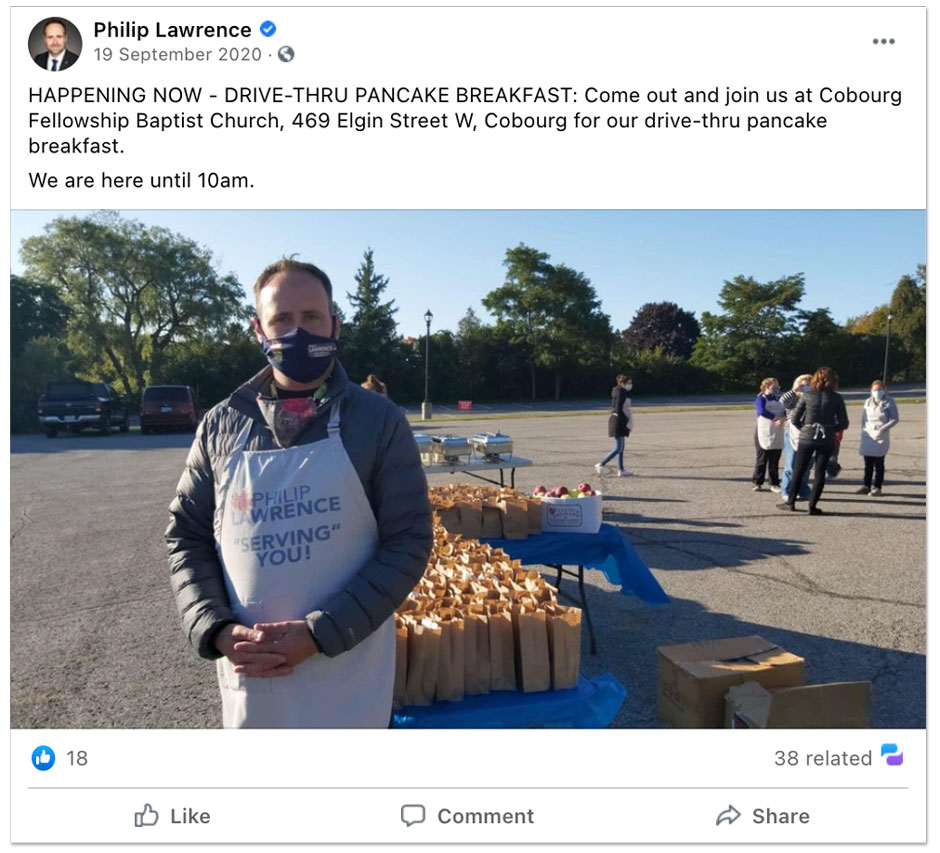 The Conservative MPs did not respond to multiple requests for comment. Party spokesperson Cory Hann would not clarify if the party endorses Houghten’s petition, but echoed Houghten’s call to amend Bill C-6.

“Conservatives agree that conversion therapy is wrong and should be banned,” Hann told PressProgress, but added: “It is disappointing the Liberals refused to support our reasonable amendments at the Justice Committee which would have added greater clarity to the legislation.”

Conservative leader Erin O’Toole has attempted to walk a tight-rope on the issue,  expressing support for a conversion therapy ban while simultaneously pandering to social conservatives who falsely claim the bill would ban all “conversations” about sexual orientation.

Houghten’s blog cites writings from the Association for Reformed Political Action (ARPA), an anti-LGBTQ social conservative group that claims Bill C-6 would prevent the Church from bringing LGBTQ youth “into conformity with the Word of God,” leading to an “age of sexual confusion.”

ARPA is the political arm of Reformed Christian churches and says its mission is to “bring a biblical perspective to our civil authorities.” The group has close ties with conservative politicians and featured Alberta Premier Jason Kenney as a past keynote speaker.

In December, ARPA Law and Policy Director André Schutten provided a presentation to the parliamentary justice committee defending conversion therapy. Schutten cited the experience of his “colleague” Jose Ruba, whom he claimed had successfully received “counselling” for “unwanted sexual behaviour.”

Prior to the justice committee presentation, Ruba spoke at the International Federation For Therapeutic and Counselling Choice — which describes itself as the “home of the once gay.”

In a statement, the IFTCC said it believes banning conversion therapy is a “cultural Marxist” strategy meant to “encourage conflict and revolution” and backed Houghton’s calls for civil disobedience.

“Not unlike the first century Roman Christians who were considered the heathens of the day, refusing to sanction state ideology, many today believe the criminalizing of any viewpoint rejecting state ideologies on gender and sexuality, is worthy of not only of non-violent defiance but also of utter contempt,” the IFTCC told PressProgress.

“Civil disobedience has to be considered by Christian Churches and their members.”

The debate on Bill C-6 has seen a number of Conservative MPs make headlines wading into topics of sex and gender.

Conservative MP Tamara Jansen, a senior member of ARPA who has promoted six-day creationism and expressed doubts about evolution, made headlines after quoting the Bible in the House of Commons and suggested conversion therapy could help curb “lesbian activity.”

Here’s a Tory MP just straight up asking: Maybe conversion therapy to get rid of “lesbian activity,” is good? pic.twitter.com/BLoGRVk350