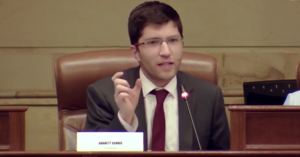 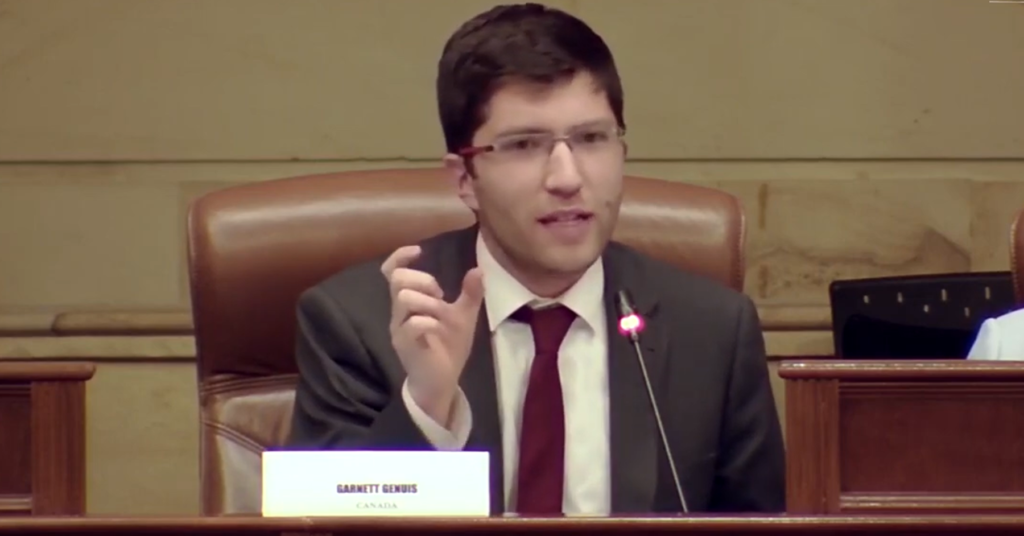 Genuis, an outspoken social conservative, has spent the past year campaigning against legislation to ban conversion therapy in Canada. On Tuesday, Genuis joined dozens of Conservative MPs who voted against Bill C-6, which ultimately passed with 263 in favour and 63 opposed.

Genuis used resources from his MP office to produce a video defending conversion therapy, though he insisted his position is only motivated by the wording of the legislation rather than his personal views on LGBTQ rights.

However, in April 2019, Genuis accepted a paid flight to Bogotá, Colombia to speak at a conference hosted by the Political Network For Values — a group chaired by the “family and youth minister” in Viktor Orbán’s far-right Hungarian government and partly funded by a think tank formally affiliated with Orbán’s Fidesz Party.

Orbán’s government is currently cracking down on LGBTQ rights, leading Hungary to be condemned by governments across the European Union.

The Political Network For Values lists opposition to abortion rights and same-sex marriage as its core values. The group has also promoted conspiratorial claims that billionaire George Soros is subverting traditional gender norms because he is “imposing on Europe” an “ideology aimed ultimately at creating a ‘new man’.”

In photos and video obtained by PressProgress, Genuis is seen speaking alongside anti-LGBTQ speakers with ties to Orbán’s government, as well as Spain’s Vox Party, Poland’s Law and Justice Party and Russian neo-monarchists. 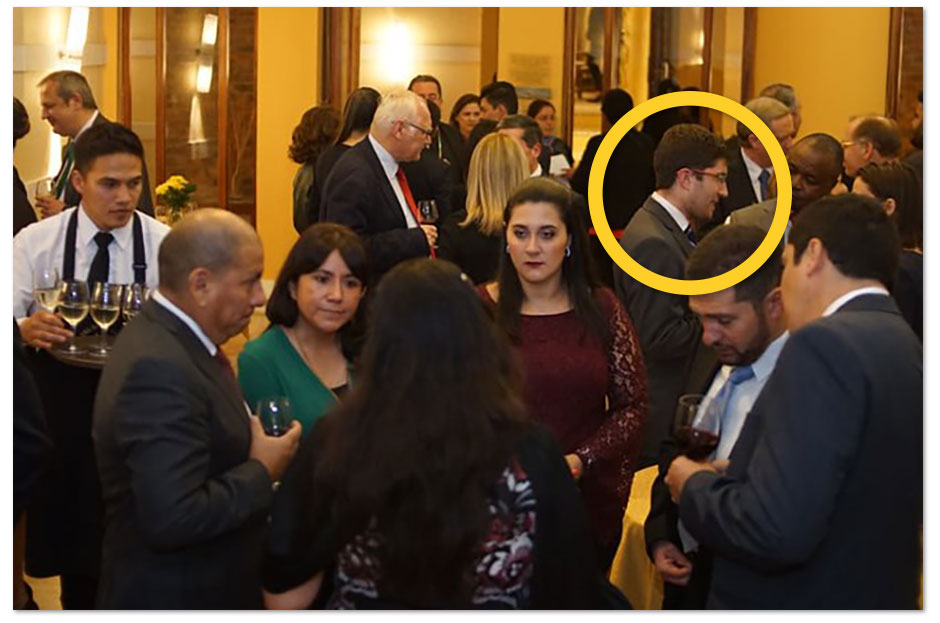 In addition to Fidesz’s Foundation for a Civic Hungary think tank, the event’s sponsors included:

During a panel titled “The right to life: First human right and foundation of civilization,” Genuis spoke alongside Thomas Jacobson, author of the “Abortion Worldwide Report” and director of the Global Life Foundation.

“Affirming solid principles on which to build the future is urgent in the face of an escalating global offensive – gender ideology, anti-natalism, euthanasia, corruption, etc. – and the growing political polarization between the New Global Order and populism. The Summit provides a forum to share strategies, best practices and lines of action for strengthening the family, marriage, the defensce of life and human dignity and freedom of conscience and religion, always with profound integrity in the management of public resources.” 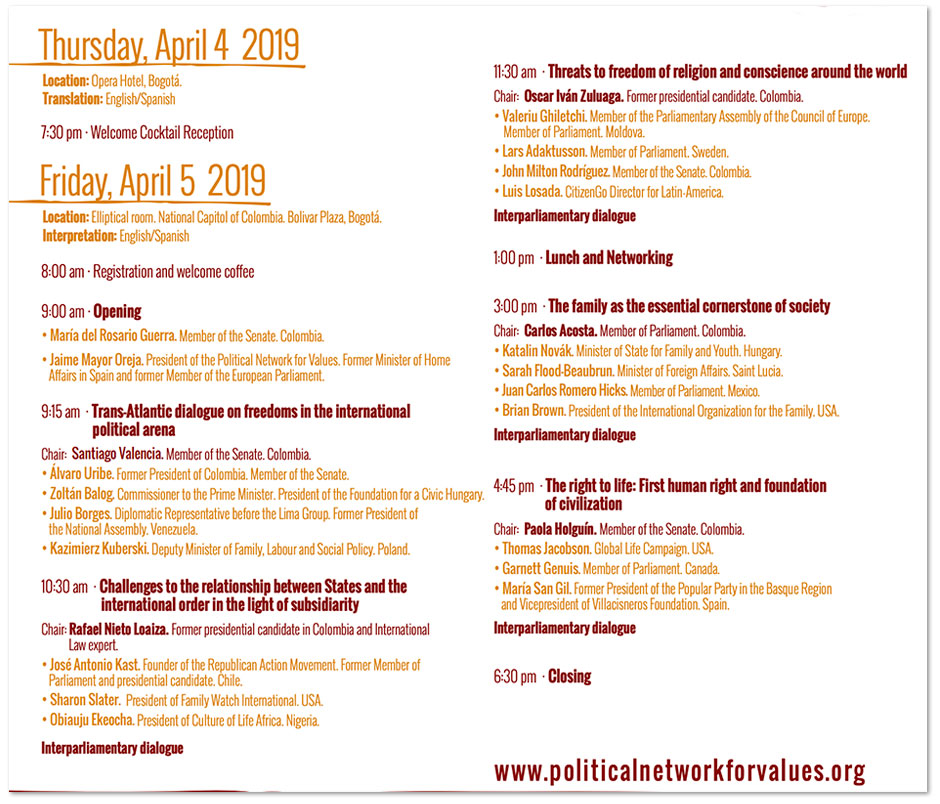 At the beginning of his speech, Genuis tipped his cap to the Orbán government’s tax cuts for families with more than three children, which have been described by the far-right Prime Minister himself as his government’s answer to an aging population “rather than immigration.”

“If I decide to move to Hungary I now know how fiscally advantageous that will be for me,” Genuis quipped, announcing his fourth child is on its way.

Genuis claimed the event as a “sponsored travel gift” at a value of over $1,300.

Genuis and the Conservative Party of Canada did not respond to multiple requests for comment from PressProgress.

No Conversion Canada founder Nicholas Schiavo said it was troubling that Genuis would attend this kind of event given the Orban’s government’s crackdown on LGBTQ rights.

“Hungarian Minister of Families, Katalin Novák has consistently shown her disdain for the equality, dignity and human rights of LGBTQ2+ peoples through several pieces of cruel legislation,” Schiavo told PressProgress.

“The Orbán government continues to fuel dangerous rhetoric and discrimination towards the queer community, and as Canadians we must always reject this hatred wherever it may appear.”

According to the program, available on the Political Network for Values website, there were other questionable speakers at the event. 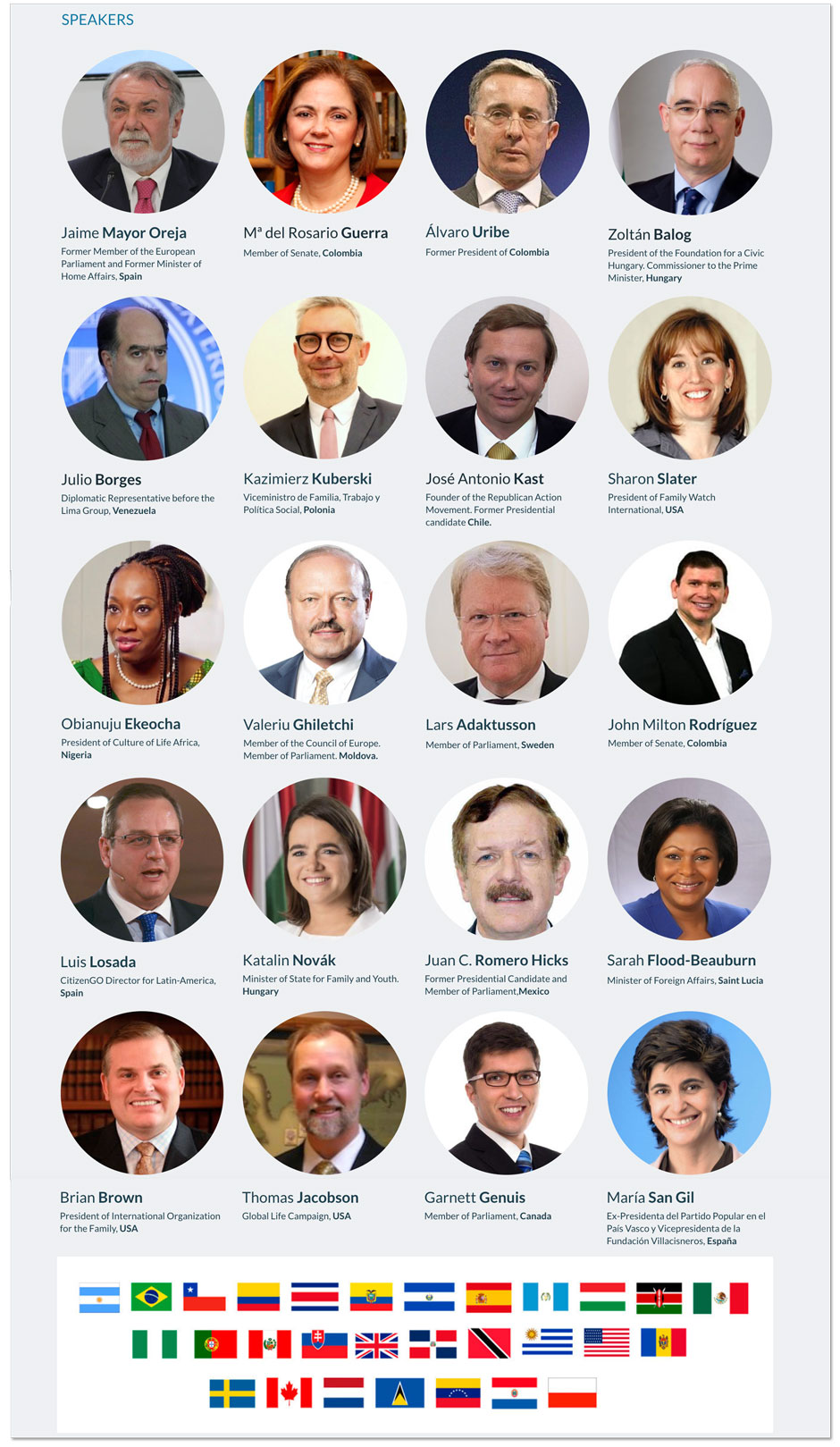 The panel immediately preceding Genuis featured Brian Brown of the International Organization Of the Family and the World Congress of Families. In 2019, the WCF organized a large anti-gay and anti-abortion march in northern Italy featuring Matteo Salvini of Italy’s far-right Lega Party alongside Novák.

The WCF, according to the Southern Poverty Law Centre, also has close ties to the Russian Orthodox Church and to Russia’s neo-monarchist far-right. A recent report by the European Parliament notes the WCF is linked to an extensive network of oligarchs and far-right churches — most-prominently Vladimir Yakunin and Konstantin Malofeev, who was sanctioned by the Harper government in 2014 for funding secessionist groups in Eastern Ukraine.

These individuals have spoken at and, through various fronts, helped mobilize for Marine Le Pen in France, Salvini in Italy, Fidesz in Hungary and even the AfD in Germany. 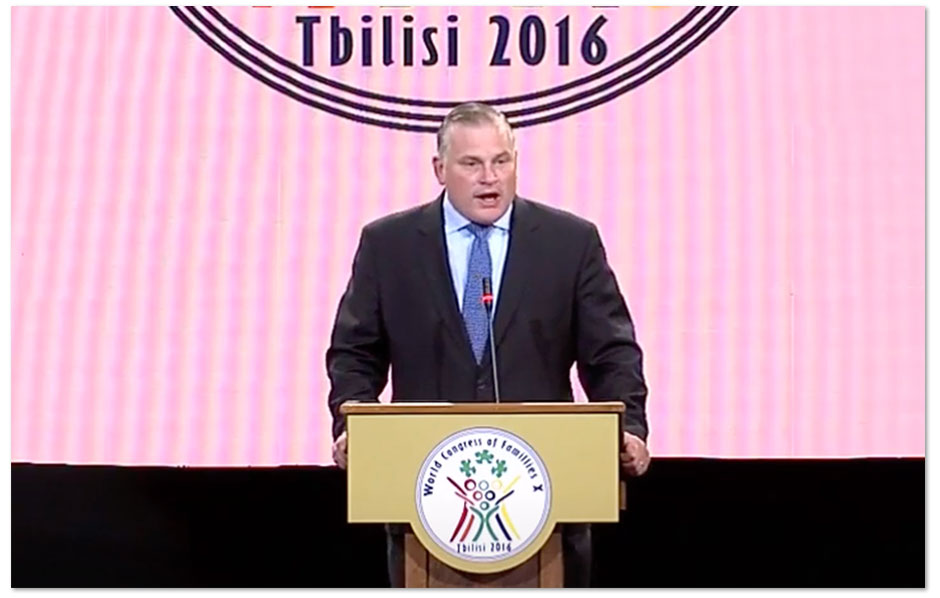 Georgian WCF activist Levan Vasadze, also founder of Georgia’s Demographic Revival Foundation, has spoken alongside Brown and translated for him.

Packed premiere of #UnplannedMovie in #Tbilisi #Georgia. Thank you to my brother Levan Vasadze for making this premiere happen. pic.twitter.com/JIuN97Swz8

Brown has ties to the Ukranian right as well. In 2019, he spoke alongside his “new friend” MP Pavel Unguryan at the All-Ukranian Family Forum in Kyiv.

CitizenGo, whose board of directors also features Brown and Alexey Komov (the “right-hand man” to sanctioned Russian oligarch Konstantin Malofeev) also operates in Spain under the name HazteOir.org. 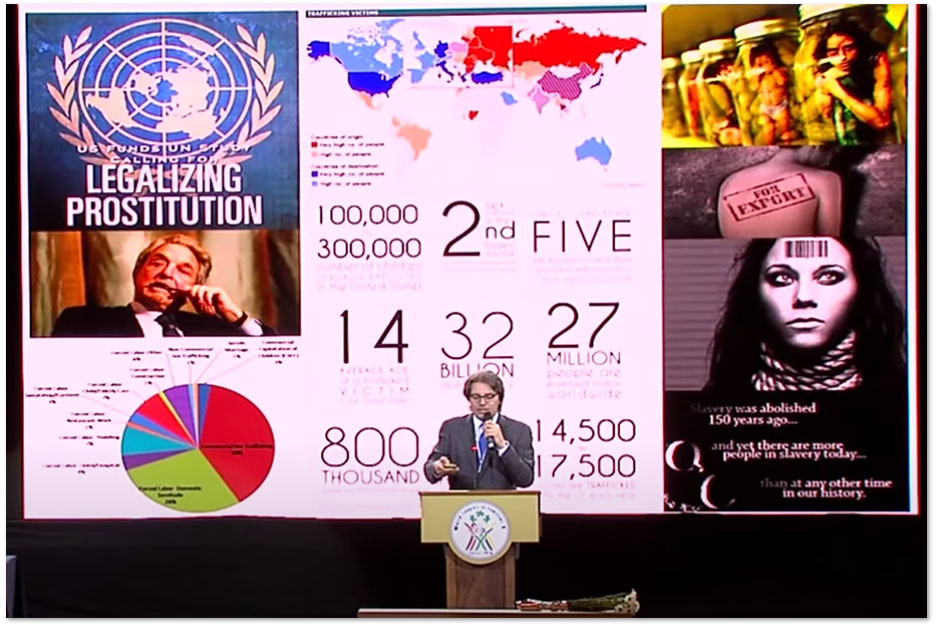 HazteOir.org is infamous as a prominent ally of VOX, a Spanish far-right party that has compared its own rise to the Inquisition. HazteOir.org was noted as a Vox supporter by the Washington Post in 2019.

The organization previously hosted VOX leader Santiago Abascal at its events. Abascal has previously described the legacy of Spain’s former, long-ruling fascist dictatorship as “a memory of greatness.” Arsuga, who is rumoured to be General Franco’s great-grandson, was photographed alongside VOX leader for Madrid City Council and VOX secretary general Javier Ortega Smith in 2016.

Arsuaga previously told a Spanish newspaper: “We will never ask people to vote for VOX. But our campaign will help Vox indirectly.” 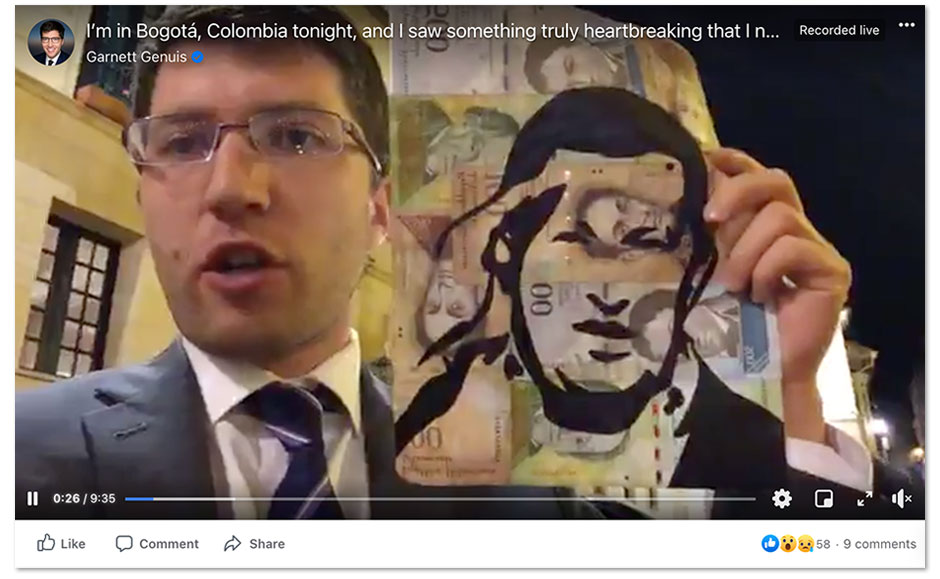 And speaking on a panel titled “Trans-Atlantic dialogue on freedoms in the international political arena” were Kazimierz Kuberski, deputy family, labour and social policy minister to Poland’s right-wing, anti-abortion government and Zoltán Balog who heads the Foundation For Civic Hungary, the think tank affiliated with Orbán’s Fidesz party.

The Political Network For Values did not return requests for comment.