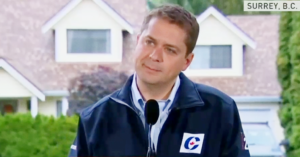 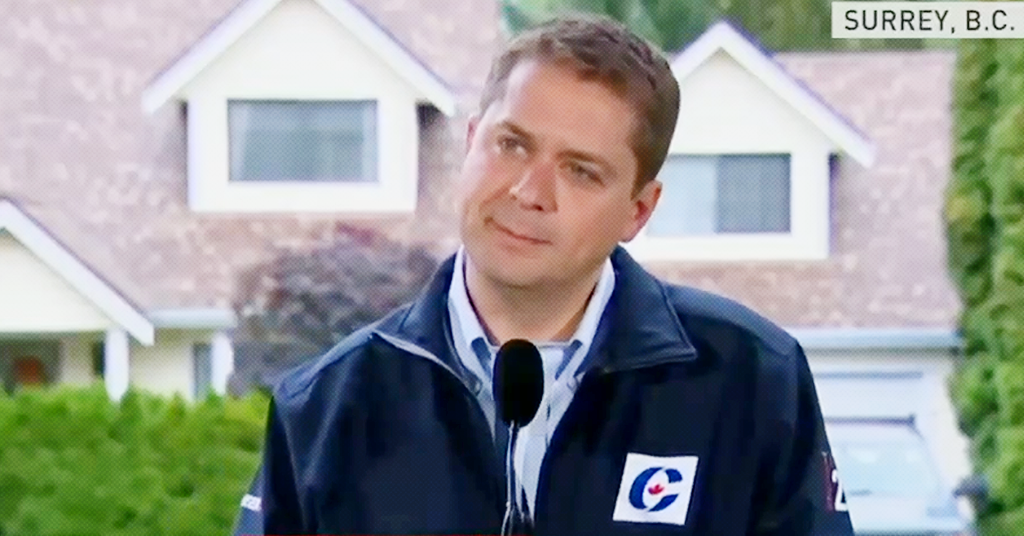 Only hours earlier, Andrew Scheer told reporters his candidates must ‘take responsibility’ and ‘apologize’ for racist or homophobic remarks

Andrew Scheer has boxed himself into a corner.

Last night, Scheer held an impromptu midnight press conference on his campaign plane to make clear he will stand behind any candidate who makes racist or homophobic remarks as long as they take “responsibility” and “apologize.”

Here are quotes from Scheer’s scrum on-board his campaign plane from Ottawa to Vancouver. He says he will standby candidates with controversial statements as long as they apologize. pic.twitter.com/X0SOLCMbGp

This morning, Scheer did neither of those things when he was asked if he should also apologize for his own remarks comparing same-sex marriage to a dog’s body parts.

Pointing to “the framework” Scheer laid out to reporters hours earlier on his plane, CBC News’ Katie Simpson asked the Conservative leader if he should set an example and apologize for his 2005 speech in the House of Commons in which he compared same-sex marriage to a dog.

Scheer wouldn’t quite answer the question — instead, he suggested his candidates don’t need to apologize or explain themselves as long as they promise to support fundamental freedoms and constitutional rights in the future.

Asked directly if he would apologize and start “living up to your own standard that you’ve set for your own candidates,” Scheer once again refused to apologize.

A few weeks earlier, the Liberal Party of Canada published a video of Andrew Scheer speaking against same-sex marriage in the House of Commons in 2005.

In the video, Scheer drew a strange metaphor comparing same-sex marriage to the body parts of a dog:

“How many legs would a dog have if you counted the tail as a leg? The answer is just four. Just because you call a tail a leg doesn’t make it a leg. If this bill passes, governments and individual Canadians will be forced to call a tail a leg, nothing more.”

To be a leader for all Canadians, the Conservative Party leader should now end his lifelong boycott of Pride events and explain whether he would still deny same-sex couples the right to marry, as he said in Parliament. pic.twitter.com/5WEyja6Ov5

When he responded to the video, Scheer would not express regret or apologize for his remarks. He also would not explain his personal views on same-sex marriage or when and why they had changed.

Earlier in the morning, the Conservative Party dodged a report from PressProgress about another Conservative candidate who made homophobic remarks by noting their candidate was a Liberal at the time.

Sinder Purewal made national headlines after he called for Vancouver’s Pride Parade to be “banned,” complaining pride parades are a “vulgar display of sexuality.”