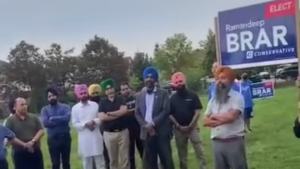 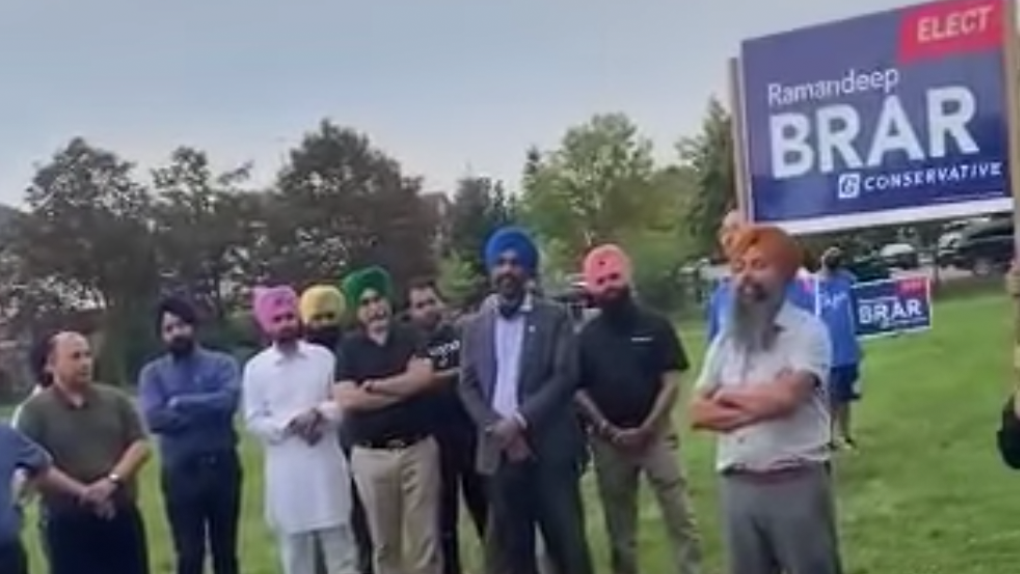 Ramandeep Brar, the candidate for Erin O’Toole’s Conservatives in Brampton South, says he is threatening to sue a truck driver following a viral video showing the former employee confronting Brar with allegations of wage theft and abusive working conditions.

Last Sunday, a worker named Barjinder Singh confronted Brar at a Conservative campaign event at a local park, alleging that while he was employed at Brar’s trucking company in 2016, Olympia Group Systems Inc., Brar verbally abused him and withheld wages.

A video of the confrontation was later shared on Instagram by the Naujawan Support Network, a grassroots group in Brampton which organizes campaigns with truckers against wage theft.

NSN says they did not film the video or coordinate Singh’s confrontation with Brar, but told PressProgress they spoke to Singh afterward and confirmed he was previously employed by Brar.

Brar did not respond to multiple requests for comment from PressProgress.  PressProgress was not able to independently verify the allegations that the worker directed at the Conservative candidate at the event.

In addition to being shared on Instagram, the video has been viewed half a million times on TikTok and has 1.5K shares on Facebook.

According to an English translation of the Punjabi-language video independently commissioned by PressProgress, Jasjit Brar, who is President of Olympia Group Systems Inc. and Ramandeep’s wife, acknowledges Singh was in fact previously employed by their company.

“You used to work with me, right?” Jasjit Brar says to Singh, according to the translation.

“I’m speaking about you being the employer, and I was a youth. I was 22 years old back then, why would he (Ramandeep Brar) insult and swear at me,” Singh replied.

“When I asked for the money, he told me that it will be paid at the end of the month,” Singh continues, speaking to Jasjit Brar. “You didn’t take my calls, and when I called him (Ramandeep), he would ask me to call you.”

In a Punjabi-language interview with OMNI News Thursday night, Ramandeep called the allegations “baseless” and says he plans to sue Singh for defamation. Ramandeep Brar also accused Singh of being sent by an NDP or Liberal rival candidate — though he provides no evidence to support that claim.

“I appeal to all residents to not believe such rumours… they are baseless,” Ramandeep Brar said according to a translation of the OMNI News broadcast.

“The opposition camp is quite desperate … they’re staring at defeat, so they were going to create an incident,” Ramandeep Brar added. “That brother (Barjinder Singh) tried to ruin the event … I don’t know if he has a genuine concern or someone sent him.”

Singh told OMNI he stands by his allegations of wage theft and denied that he is connected to a rival party. Singh explained that he regularly plays volleyball at the same park where Ramandeep hosted his campaign event and had no advance knowledge that the candidate would be there that day.

“They are true and I stand by them,” Singh said. “I do not retract them.”

“I am neither affiliated with any party nor am I a member of the Liberals … the NDP or any other parties of Canada … I am not connected with them at all,” Singh added.

“I work 5-6 days, and hardly recover my sleep the seventh day. I don’t have the time for anything else, and I am not affiliated to them [the political parties]. Their allegations are completely false.”

Singh also explained he did not bring up the allegations earlier because in 2016 he was a newcomer on a work permit with few resources.

“I was new and did not have any resources. I thought if I went to a lawyer I might get taken advantage of or how much it would cost. I did not have much money… I had just arrived on work permit.”

Singh adds that since the video of the interaction has gone viral, he has experienced a lot of stress.

“I am by myself and I don’t have any family here,” Singh says. “I am quite stressed, and I have lost sleep over it.”

“I do think that I could have kept silent, but at that moment I was disappointed at the idea of having leaders like him … (thinking) what if I went to the MP office tomorrow for assistance and Brar … is there, how do I look him in his eyes?”

The Naujawan Support Network has organized successful letter campaigns and protests against several other local trucking companies, recovering thousands of dollars in stolen wages for workers.

“What is new in Brampton is that workers are starting to confront their employers directly in full public view,” Naujawan Support Network said in a statement to PressProgress.

“Videos of these confrontations are being shared widely on social media and they are inspiring more and more workers to take action against their own employers. Courage in the face of exploitation is contagious.”

NSN says that while some employers have paid back wages to workers, others have responded with legal threats.

“We are not intimidated by legal threats, and we stand firmly with all workers facing similar threats from their employers, regardless of whether the employer is a political candidate, MP or Prime Minister,” Naujawan Support Network said in a statement to PressProgress.

“We know our rights, we know the truth of our claims, and we are committed to defending the truth above all else.”

“The real power lies with organized workers, and we are just beginning to learn how to use it.”