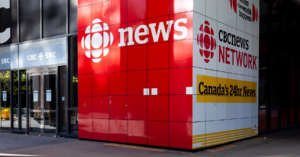 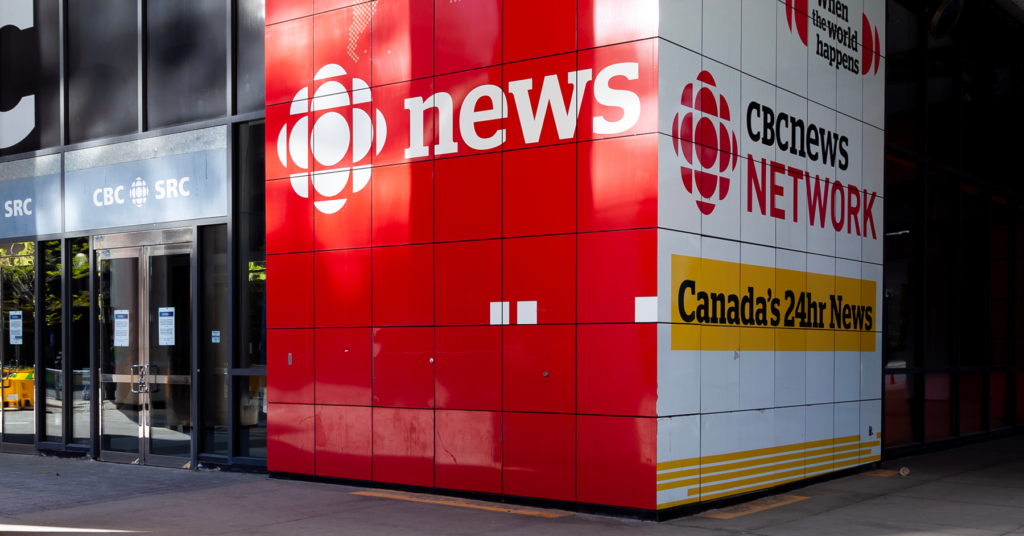 CBC Launched a Whistleblower Hotline to Report Racist Workplace Incidents. Most Calls Are About CBC Management.

As Canada’s public broadcaster reckons with systemic racism, a “confidential” internal report presented to CBC management suggests CBC management itself might be one of the biggest parts of the problem.

Last summer, in response to vocal criticism from CBC employees over CBC News’ problematic coverage of Black Lives Matter protests following the police murder of George Floyd, CBC announced it would create a whistleblower hotline for CBC employees to “report, safely and anonymously, any instance of racism that they experience or witness.”

“While we always encourage you to speak with your manager in the first instance, I know that there are situations in which you would rather ask a question, seek assistance or make a report anonymously,” CBC/Radio-Canada President and CEO Catherine Tait wrote in a July 21, 2020 memo.

A “confidential” internal report newly obtained by PressProgress indicates that since the hotline was created in July 2020, the majority of complaints have related to allegations of racist discrimination by CBC management.

The report was first released through Access-to-Information to public interest researcher Ken Rubin.

In the anti-racism whistleblower hotline’s first six months, the report indicates the public broadcaster received 12 reports of incidents of racism — at least seven (58%) related to allegations about management.

According to a January 26, 2021 update, “inappropriate comments” were the focus of 41.2% of the hotline reports. Other hotline reports related to development and promotion (35.3%), other forms of discrimination (17.6%) and salary equity (5.9%). 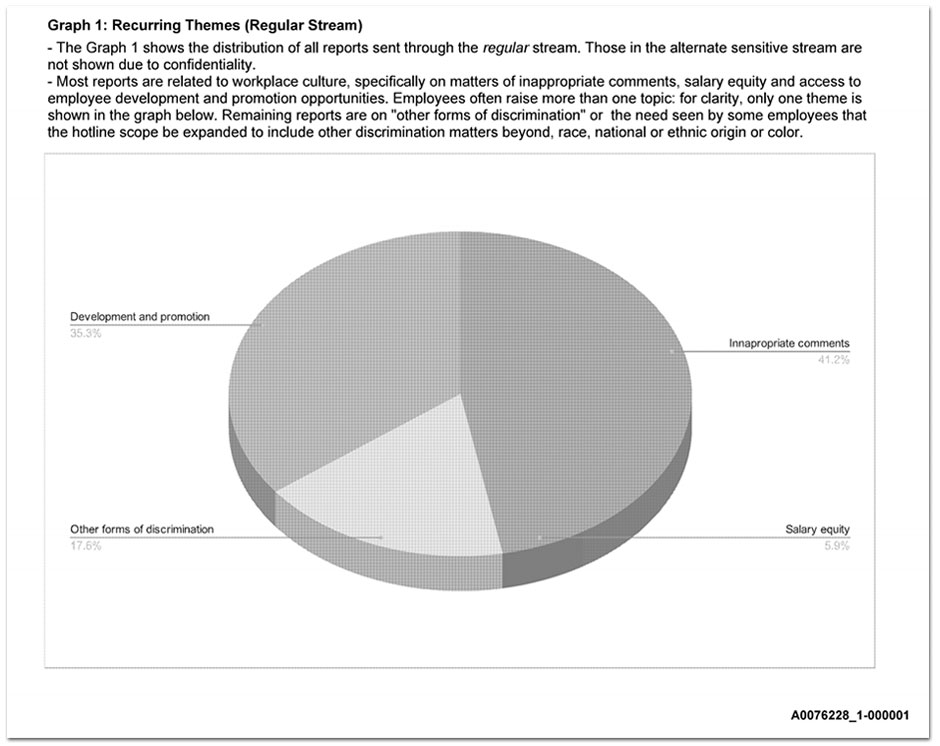 “Most reports are related to workplace culture, specifically on matters of inappropriate comments, salary equity and access to employee development and promotion opportunities,” the report notes.

The confidential documents indicate that up until October 2020, CBC also tracked a category labelled “discrimination / racism (by management).”

Before CBC stopped reporting that data, “discrimination / racism (by management)” accounted for nearly two-thirds (63%) of all “anti-racism” complaints. 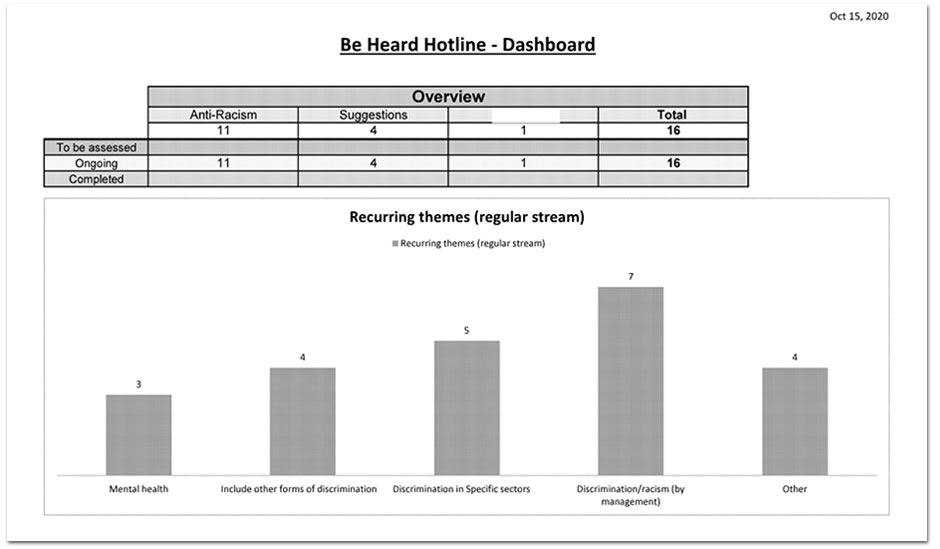 In a statement, a CBC spokesperson told PressProgress the hotline was created “to ensure that concerns about any possible power dynamic do not prevent someone from reporting an incident.”

CBC did not respond to questions from PressProgress about why it chose to stop including data on “discrimination / racism (by management)” in its monthly reports, but said: “We are concerned about discrimination by anyone in the workplace, including by management.”

Public discussions about CBC’s handling of racism in the workplace were reignited this week after former CBC broadcaster Wendy Mesley penned a column in the Globe and Mail reflecting on “CBC’s problem with racism.”

Mesley was subjected to an investigation by CBC over two uses of the N-word in the workplace and was disciplined. Mesley announced her retirement this week.

Mesley’s column has faced criticism from racialized journalists, including Ahmar Khan who was fired for trying to blow the whisle on racism at CBC Manitoba.

Khan had leaked information to Canadaland revealing he had been asked to delete a tweet criticizing Don Cherry’s “xenophobic comments.”

Khan stated he became depressed and suicidal following the poor treatment at his “dream job” at CBC. After Khan’s union filed a grievance, the arbiter decided CBC acted “improperly” in dismissing him and ordered the CBC to rehire him for four months and pay damages.

Wendy Mesley was allowed to keep her job and essentially left on her own terms. I called out racism and talked about how I felt tokenized and that was canonized to fire me and violate my privacy.

It is hard to feel sympathetic towards somebody who brought this upon themselves.

CBC’s treatment of Khan sparked criticism from media unions and professional associations about “racial bias in Canada’s newsrooms.” The Canadian Association of Journalists affirmed that it is “every journalist’s responsibility to call out racism — even in their own newsroom.”

One source who requested anonymity in order to speak openly about the internal culture in CBC newsrooms told PressProgress that the hotline is “a move in the right direction,” but management is at the heart of the systemic issues at CBC.

Change at CBC News is happening at “glacial” speed, they said, adding more needs to be done to address issues of diversity in the composition of management — starting with Paul Hambleton, Director of CBC’s Journalistic Standards and Practices.

While the CBC reports that its management diversity has increased from 16.1% to 19.2% within the past two years, over 100 CBC journalists signed a letter calling for Hambleton’s position as head of CBC’s journalistic standards to be replaced by a panel.

“Suggesting that criticizing racism is some sort of journalistic shortcoming is not only wrong, it is dehumanizing for people of colour,” the letter stated.

NEW: CBC News confirms it has launched a review of its ‘Journalistic Standards and Practices’ guidelines.

“Under Hambleton’s decision-making, journalists are still being pulled from stories and are having to go outside the company to sign statements,” the source noted, adding the head of CBC’s Journalistic Standards has “failed BIPOC journalists.”

“The discrimination that BIPOC employees feel within the CBC has been a badly kept secret,” they added. “We’re still seeing complaints of racism because when it’s this deeply ingrained, you cannot simply turn it off.”

“The CBC must address its lack of diversity in management immediately and should remove certain individuals who have failed to protect journalists,” the source said.

“Our public broadcaster is not a safe and welcoming place for BIPOC individuals.”