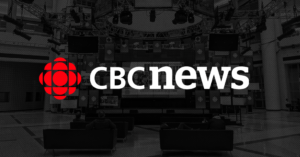 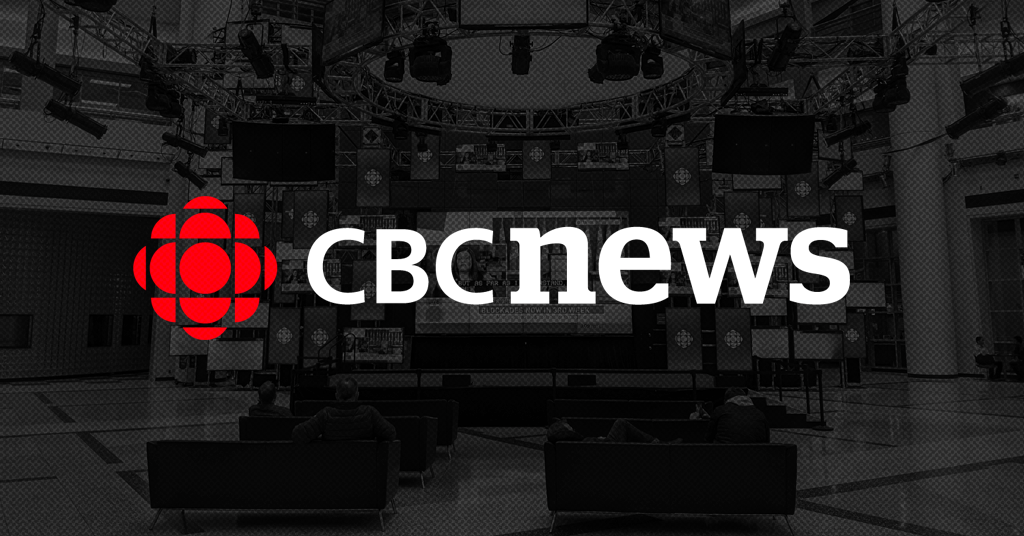 An internal CBC News memo obtained by PressProgress sheds new light on growing divisions inside the public broadcaster over coverage of the killing of George Floyd, police brutality and anti-Black racism.

“The death of another black man by a white police officer, this time George Floyd, has resulted in profound waves of outrage and anger,” CBC News Editor-in-Chief Brodie Fenlon wrote in an internal memo Tuesday morning. “This is a story deeply felt inside and outside our newsrooms.”

Fenlon continued: “Some of you have told us you feel stymied by our Journalistic Standards and Practices.”

“Some believe that our interpretation of the JSP’s key principles of impartiality and objectivity acts to exclude critical experiences and personal views.”

CBC News’ Editor-in-Chief added that “the question of inclusion and the JSP is critically important,” and said a meeting with top CBC News managers had been convened to “begin the discussion in earnest today.”

“The JSP is not a book of rules,” Fenlon said. “It can and will evolve.”

“If you are struggling to reconcile your need to do or say something with your obligations under the JSP, then please talk to us first.” 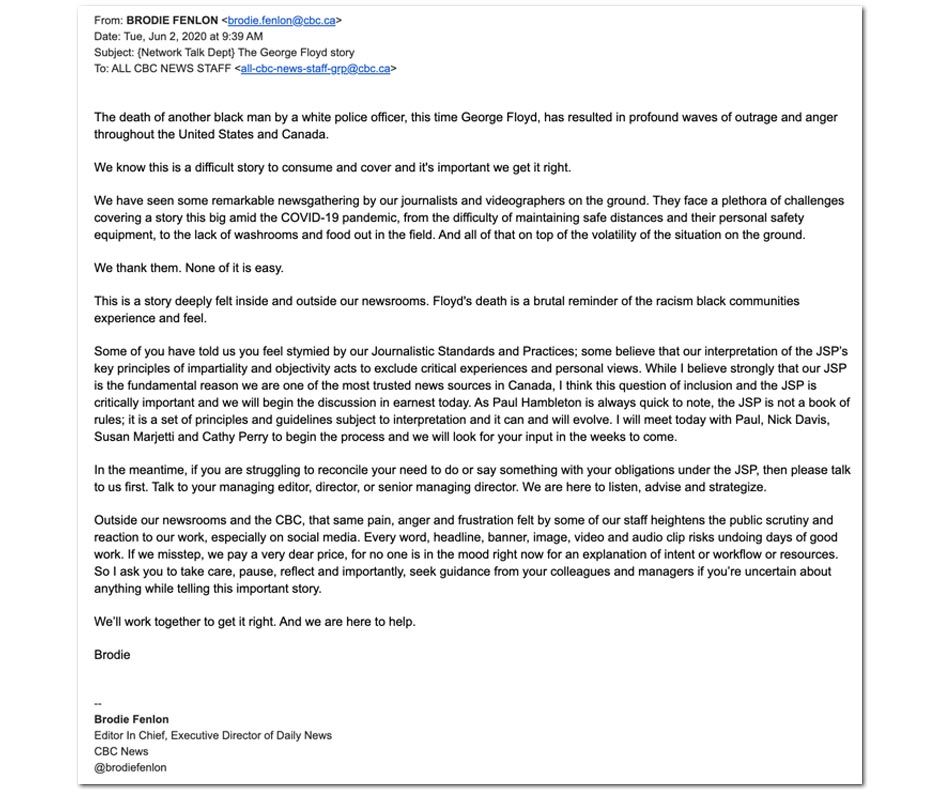 Chuck Thompson, CBC’s Head of Public Affairs, told PressProgress “the journalists who expressed this concern” did so as “a direct result of frustrations with our JSP, that it’s perceived to be too rigid in some areas.”

“As you have read firsthand,” Thompson said, “there are occasions when we hear from our journalists who want us to do better and we welcome the feedback. It’s how we get better.”

“Standards, as with any guidelines, may be subject to review and please know we are always prepared to evolve the thinking.”

CBC News unveiled the current version of its Journalistic Standards and Practices in 2018, under former Editor-in-Chief Jennifer McGuire, who framed the update as a guide to “practising journalism in the modern age.”

Alluding to the threat of fake news and partisanship online, McGuire offered up  principles like “balance” and “impartiality” as a way to restore “public trust.”

CBC News’ JSP lists “impartiality” as a core principle and states: “CBC journalists do not express their own personal opinion because it affects the perception of impartiality and could affect an open and honest exploration of the issue.”

While CBC News does have internal diversity policies, the JSP offers no guidance on how to cover issues of race nor does it affirm equality as a journalistic principle.

The JSP’s section on “crime and police reporting” includes guidance on collaborating with law enforcement agencies, however, it offers no specific guidance on issues relating to police brutality or providing critical coverage of police.

Fenlon’s memo was issued shortly after CBC News Network faced wide criticism for its coverage of police violence and anti-Black racism, even appearing to whitewash video of two NYPD police cruisers ramming into a crowd of anti-racist protesters.

JUST LOOK at how @CBCNews reported on the two NYPD vehicles that ran over protestors! They entirely frame the cops as victims. I’m sick over this. #cdnpoli #cdnmedia #BlackLivesMatter pic.twitter.com/bAQscZz10g

Here’s a side-by-side comparison of what CBC News Network aired this afternoon and the original video clip.

I’ll let you be the judge about whether the final 5 seconds that @CBCNews omitted from its broadcast showed events that had public interest value. pic.twitter.com/MpwVhHaVUI

In response to the criticism, CBC News Network issued a public apology Wednesday acknowledging that “the footage we broadcast did not meet CBC’s Journalistic Standards and Practices” and admitting they “did not provide the needed context and characterization of the event in New York City.”

“To be clear, we did not edit this video intentionally to avoid showing the longer sequence of events.”

We want to acknowledge coverage on CBC News on Sunday that did not meet our Journalistic Standards and Practices. We deeply regret this error. pic.twitter.com/49W4gPNt5g

“Like any tragic and disturbing story, we all have our own personal feelings,” the memo from Hambleton states. “Please remember your responsibility as journalists to report and observe but not to express your own opinions on your social feeds.”

The memo shows CBC News staff were repeatedly reminded that coverage of the anti-racist protests must retain an “impartial” tone.

“We don’t participate in stories or political movements,” the memo states. “Canadians need to know that they will get impartial journalism from CBC News.” 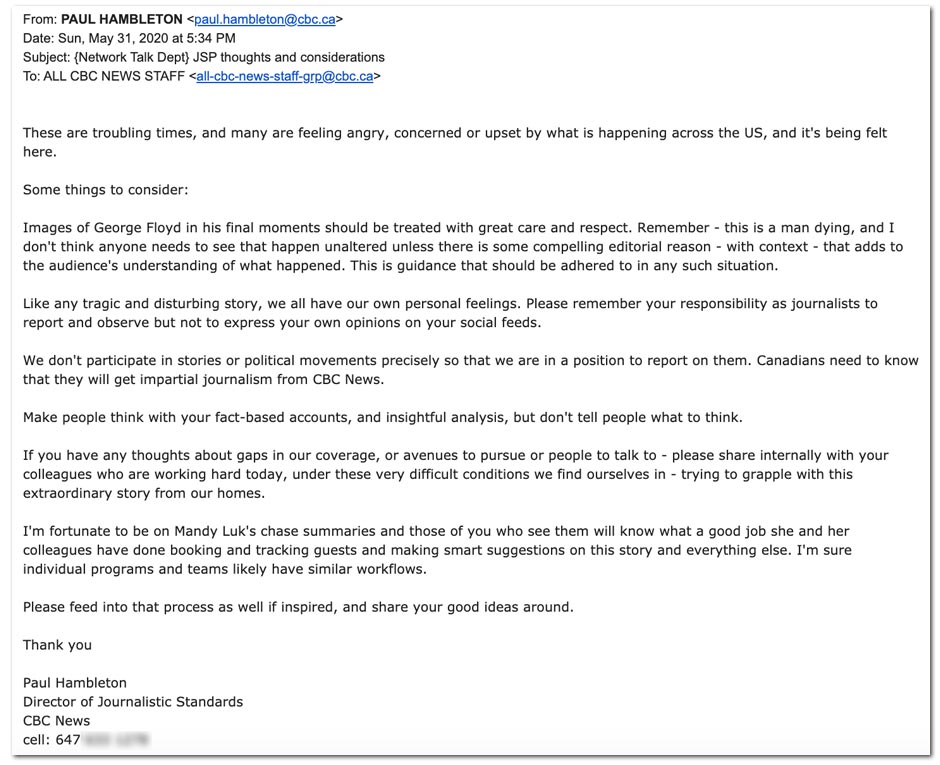 It’s unclear how journalists can truly remain “impartial” on an issue like racism, but CBC News says it now recognizes there is a fundamental contradiction.

Asked if its Journalistic Standards and Practices are itself shaped by hidden biases, CBC’s Head of Public Affairs Chuck Thompson agreed impartiality and objectivity may indeed have limits.

“We have started discussions around the issue of impartiality as a journalist and reconciling, at times, a higher value as a human being and member of society.”

Marjetti admitted: “Most of the recent issues that have crossed my desk show a lack of cultural awareness. One-sided storytelling, or missing perspectives, nuance or insensitivity. We have had to do a number of apologies because of it.” 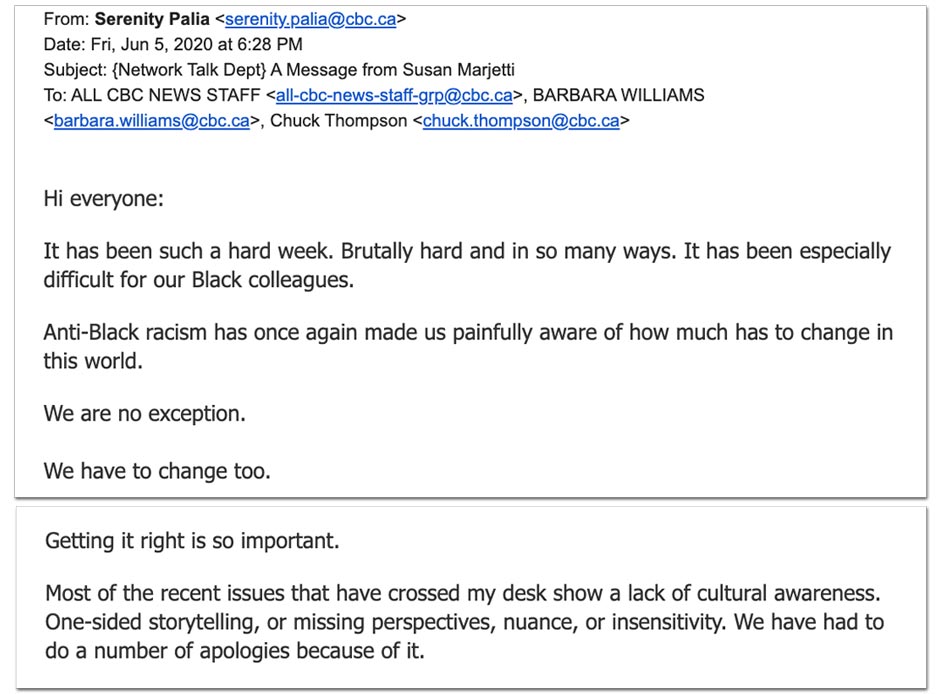 These actions will include “reviewing the JSP through the lens of inclusivity,” revising CBC News’ style guide to capitalize “Black,” as well as increasing hiring of journalists and managers from “equity groups who have been historically underrepresented in the Corporation.” 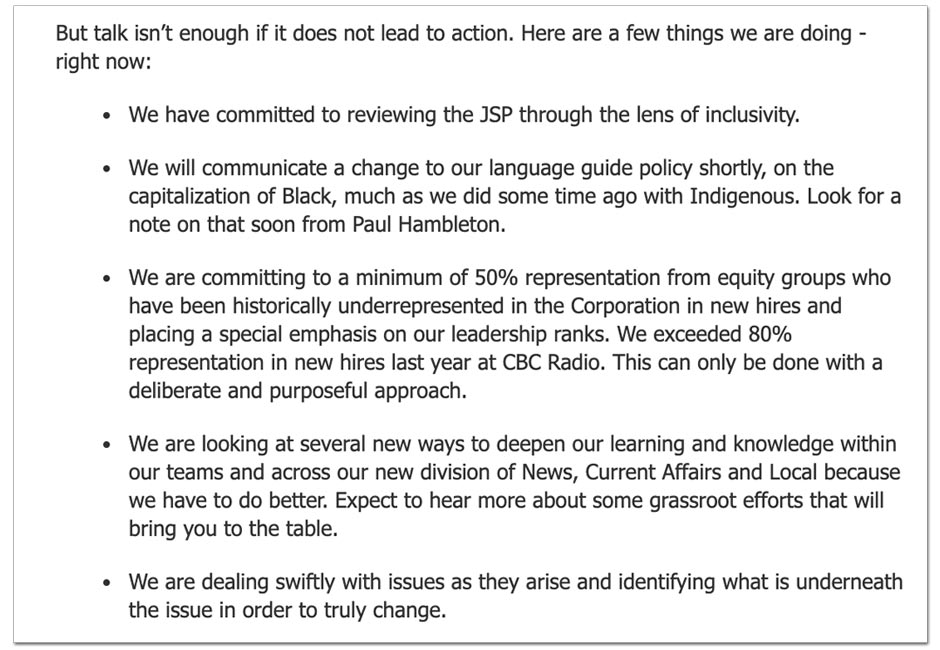 Marjetti’s memo concludes by offering a “special thank you to all of you who have been speaking up,” and adding: “It’s not easy to do but it is so important that your voices are heard.”