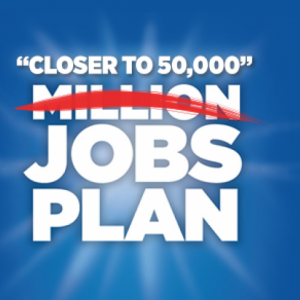 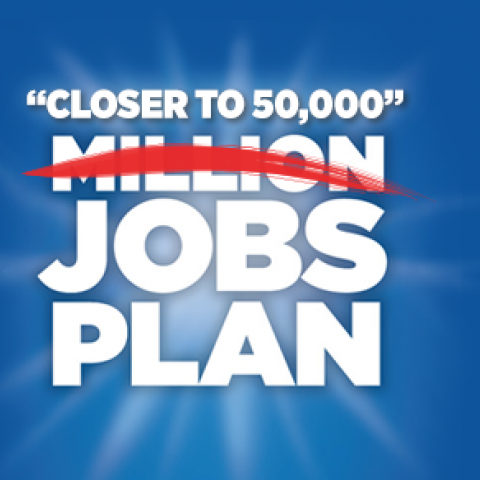 Tim Hudak had everything going for him heading into this election: a catchy slogan, a nice round number, and a plan to eliminate 100,000 public sector jobs. He even had an economist from the American Tea Party lined up to back him up. The only thing Hudak was missing, it now appears, was a calculator. Several economists […]

Tim Hudak had everything going for him heading into this election: a catchy slogan, a nice round number, and a plan to eliminate 100,000 public sector jobs.

He even had an economist from the American Tea Party lined up to back him up. The only thing Hudak was missing, it now appears, was a calculator.

Several economists who have analysed Hudak’s “million jobs plan” now say it’s riddled with so many holes, it would actually create closer to 50,000 jobs. (The Ontario PCs have already acknowledged that523,000 jobs in the plan would be created anyway if the province maintained the status quo of the last decade.)

“It is economists of different backgrounds who are pointing this same thing out,” said McMaster economics professor Michael Veall.

The error, first noticed by the Ottawa Citizen’s David Reevely, was analyzed in depth by economists with different ideological leanings (see here, here, here and here).

Team Hudak commissioned the Conference Board of Canada to supply them job creation estimates. The data was provided as person years of employment, a way of measuring work by representing it as a year of work.

Team Hudak apparently mistook each “person year” for one job and multiplied this by a factor of eight (because they wanted to forecast eight years). This led to bewildering conclusions — a single person working a job for eight years is counted as eight separate jobs created in Hudak’s “million jobs plan.”

Since Hudak’s million jobs plan was counting on half of them being created anyway, “the remaining 300-400,000 now become closer to 50,000,” economics Mike Moffatt of Western University’s Ivey School of Business told CBC.

Here’s a round-up of what other economists are saying about Hudak’s math:

“Elementary but critical arithmetic errors in their calculations resulted in the Progressive Conservatives vastly overestimating the number of jobs their plan would create. These errors demolished the underlying economic rationale the party had put forward for its smaller-government, lower-tax plan.”

These numbers may seem fanciful, and they are. But they became crazier still when the PCs decided to multiply the estimated increase in employment by the number eight — by the number of years the “million jobs plan” would take. In other words, each forecast job was counted not once, but eight times.

“Normally when economists think about a policy change and its impact on employment, it might take several years for the full effect to hit the labour market but I think you would consider the total number of jobs created over that period … You wouldn’t count them up per year, which it sounds like they’ve done.”

“Everyone is getting wrapped up on the size of their numbers, when really all the numbers are conflated … What that is, is just going out to multiple consultants … until someone comes up with numbers that look good to you. It’s absolutely cherry picking.”

For his part, Hudak, who has a Master’s degree in economics, is dismissing this universal condemnation of his math skills:

“We strongly disagree with that interpretation. I think that the economics is straightforward.” 1