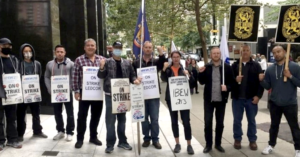 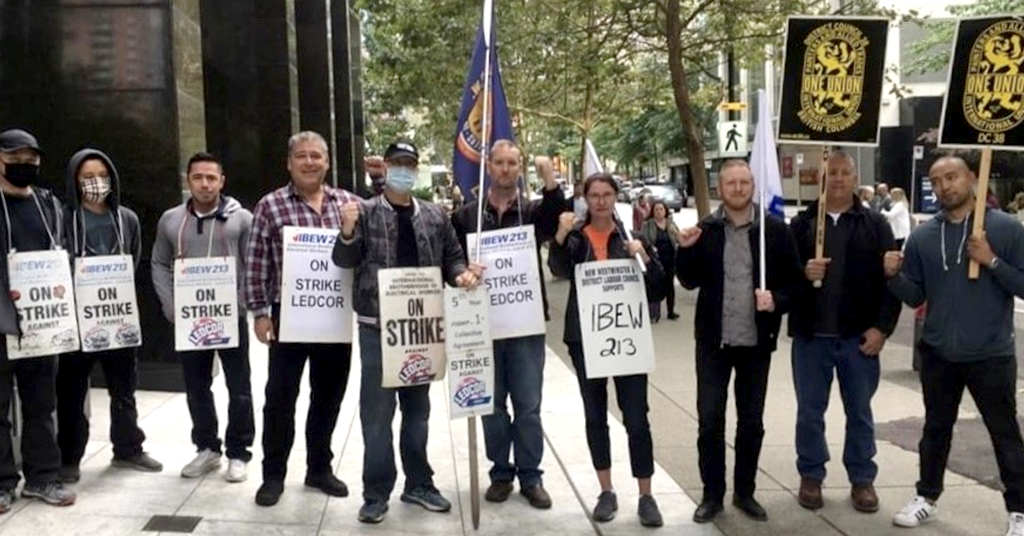 A union representing BC electrical technicians received a long-awaited victory at the Canadian Industrial Relations Board five years after trying to get a first collective agreement with their employer, Ledcor Technical Services.

IBEW Local 213 has been on strike for the last three years after voting to unionize in 2017, but not being recognized by their employer, who they say engaged in bad faith bargaining tactics and unfair labour practices in order to undermine and weaken the union.

The CIRB unanimously ruled in favour of the union and decided to settle the terms of the first collective agreement, in part because of the “the employer’s lack of good faith bargaining.”

The union says that the strike will remain in place until they receive instructions from the Board on a back-to-work plan.

After a five-year-long fight, a huge win for workers at the federal labour board as the CIRB approves our Section 80 application against Ledcor Technical Services. https://t.co/Clkoe86uHR pic.twitter.com/6sMZRAFMFF

Many bargaining unit members, which included electrical technicians involved in installation and repair, MXU and business field services, were “new to the union environment” and organized in 2017 in search of better working conditions.

“I worked for Ledcor for about 10 years, during which time we’ve seen substantial pay cuts,” Dustin Brecht, Lead Organizer with IBEW 213 told PressProgress. “We were just paid a piece rate and it kept going down instead of up.”

The breaking point was when the company issued mass layoffs while the union was attempting to negotiate the first collective agreement.

“During that process when we were trying to get a collective agreement, trying to negotiate that agreement, the trigger for us was when they had a mass layoff and basically said, you’re all laid off, here’s a row of taxis, here’s your pink slips and adios,” Jim Lofty, Business Manager for IBEW213 told PressProgress.

“That was the point where we said yeah, we (have) got to take some type of formal labor dispute action.”

According to the board, “at the time of the certification order, the bargaining unit consisted of 238 employees.”

Brecht says that number has now dwindled down to closer to 60.

Throughout negotiations, the Board found that despite repeated efforts on the part of the union to arrive at a collective agreement, LTS did not make reasonable efforts to reach an agreement.

In fact, the ruling reveals that after the LTS began performing subcontracted labour for Telus, there was a plea from the employer to the union to commit to not calling strike action at Telus’ request.

The union responded by asking LTS to sign the collective agreement in order to guarantee labour peace, but they refused. The board also found that the employer later did not make any meaningful counter proposal, and “did not have any intention of bargaining the terms of a CA with the union; it was only interested in obtaining a commitment from the union so it could pursue its contract renewal process with Telus.”

LTS also refused to bargain with the union unless they retracted comments that they had publicly made about the company, and even argued that “the referral should be dismissed as it is an unwarranted intrusion into free collective bargaining and that the Board should not assist the union in correcting the missteps and miscalculations the union made during bargaining.”

According to Robin Nedila, Assistant Business Manager for IBEW 213, LTS also attempted to mislead employees in different sections of the company, by telling certain technicians that they were not a part of the union.

“From the very beginning, the company was trying to gain an advantage illegally, by dividing the bargaining unit, and pitting worker against worker,” Nedila said.

The company then brought in replacement workers while the union was on strike, only further impacting the bargaining environment negatively.

Brecht also added that LTS wanted to keep an open-shop union model, which is in part why they continued to bargain in bad faith.

“This is the first time Ledcor is using these type of strategies to avoid a real union coming in, of course, they deal heavily with CLAC, and they would like it to remain that way,” Brecht said.

“They do not want a closed shop union environment. They want an open shop model.”

The union says that the fight was long but important, and speaks to the necessity of anti-scab legislation on a federal level, because not all unions would have the capacity or the numbers to fight this fight for as long as they did.

“We will be going to Ottawa in a couple of weeks to lobby replacement worker legislation so that anti-scab does not go sideways, and that labor code for the federal employers does hold them to task the way it doesn’t some of the provinces.”

Nedila added that they hope their fight paves the way for other workers to unionize in their workplaces, even if they are facing challenges in doing so.