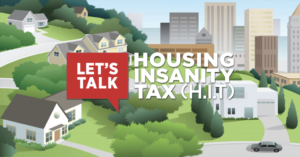 A charity affiliated with the United Nations said they wanted to talk about British Columbia’s housing crisis.

Instead, a recent event on affordable housing turned into a venting session for luxury condo developers, business elites and former Saskatchewan Premier Brad Wall, who all have a bone to pick with BC’s tax on wealthy real estate speculators.

Several prominent political and business leaders took part in a “gala-style luncheon” in Victoria promoted by a UN charity as a dialogue  “exploring the BC housing crisis” until it turned into an airing of grievances against the BC NDP government’s new “speculation tax” – that’s a tax targeting real estate speculators who don’t pay taxes in BC and drive up the province’s housing costs.

A full-page ad in Victoria’s Times-Colonist newspaper last week, co-branded between the United Nations Association in Canada and a Victoria-based real estate firm called Focus Equities, bizarrely billed the event as a discussion about the quote-unquote “Housing Insanity Tax.” UNA-Canada is a registered charity whose mission seeks to “educate and engage Canadians in the work of the UN” and secure a “future based on equality, dignity and justice for all.”

So it’s not surprising the charity is feeling red faced about over-the-top rhetoric describing taxes on real estate speculators as “insanity.”

UNA-Canada did not sponsor the Kenneth W. and Patricia Mariash Global Issues Dialogue. Rather, we were the charity of choice, with proceeds contributing to our Building Young Entrepreneurs Programme.

Although UNA-Canada is identified as the organizer on the event’s registration page, extensively promoted the event online and listed its staff as contacts for RSVPs and “sponsor opportunities,” the charity says a Victoria real estate mogul was the true organizer of the event.

“Bayview Properties were the organizers of the event with UNA-Canada serving as their charity of choice,” UNA-Canada CEO Kate White told PressProgress, adding that the charity “incurred no expenses” related to the event.

Last year, Mariash’s company donated $13,500 to the BC Liberals before and during the 2017 BC election. Around the same time, the luxury condo developer had floated the idea of establishing a private commuter rail service in Victoria – former Premier Christy Clark’s BC Liberals launched a working group to look at the idea.

The event’s agenda includes a welcome message from Mariash, noting the “housing crisis and speculation tax issue” hits especially close to home for the event “sponsor,” given his company’s role “as developers of the 2,000-unit Victoria harbour development, Bayview Place.”

The event itself even took place at Mariash’s Bayview Place property. The tone of the event was a little more political than typical charity fundraisers too.

As the Times-Colonist reported, event panelists denounced the tax on housing speculators, suggesting it will “destroy the province’s standing as a place to do business.”

One panelist at the event, former Saskatchewan premier Brad Wall, complained the tax on real estate speculators will discourage wealthy Saskatchewanians from gobbling up properties in BC.

Open to what? Open to allowing the #HousingCrisis to continue? We absolutely welcome people to come make BC their home and community, but our metropolitan areas are not places to park empty units because it contributes to the problem. Homes first. #bcpoli https://t.co/az5iDAUjNP

Last month, a poll by Angus Reid found three-quarters of British Columbians (75%) thought the province’s tax on foreign or domestic residential property owners who don’t pay taxes in BC is either a “good idea” or a “very good idea.”