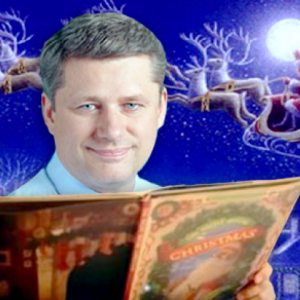 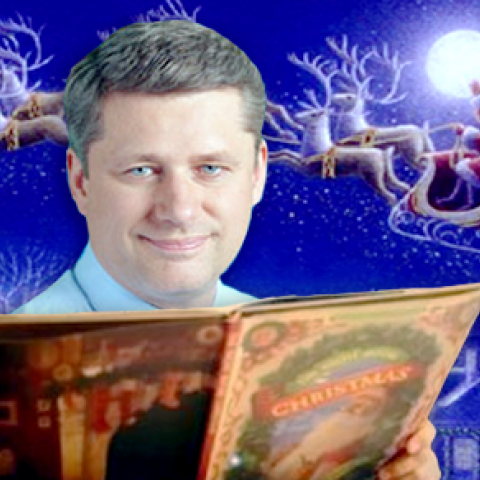 ‘Twas the Night Before Conservative Christmas

In honour of the holiday season, we re-wrote the Christmas classic to bring you ‘Twas the Night Before Conservative Christmas. Find out what gifts “Saint Harper” has for Canadians:    ‘Twas the night before ChristmasWhen all through the HouseNot a “creature” was stirringNot even John Baird’s mouth The stockings all hungBy Canadian chimneys with careIn hopes […] In honour of the holiday season, we re-wrote the Christmas classic to bring you ‘Twas the Night Before Conservative Christmas. Find out what gifts “Saint Harper” has for Canadians:

The children were nestled
All safe in their beds
While visions of the Family Tax Cut (well, only in one of 10 households)
Danced in their heads

More rabid than wolves
His coursers they came
As he shouted
And shouted!
And shouted!!
Them by name So up to the housetops
Harper’s coursers they flew
With a sleigh full of ill-conceived tax breaks
And Economic Action Plan ads, too ($14.5 million worth)

Still, on so many issues
The country only heard silence
Thanks to the muzzling of civil servants
And men and women of science

Cutting $36 billion to health care
And again from the CBC
But a climate change plan?
There was nothing to see

And if you’d like to avoid reading the real “A Night Before Christmas” to your kids this year, and would like the Conservative Party to do it for you — backed by an orchestral score — you’re in luck!
With his monotone opening lines, we’re amazed at how Harper can make even holiday verse sound frightening. (Also, check out the 2:43 mark to find out why Peter MacKay should never do community theatre.)

Photo: uggboots2009. Used under a creative commons BY 2.0 licence.