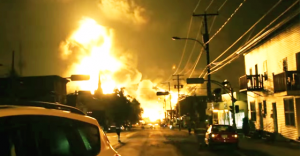 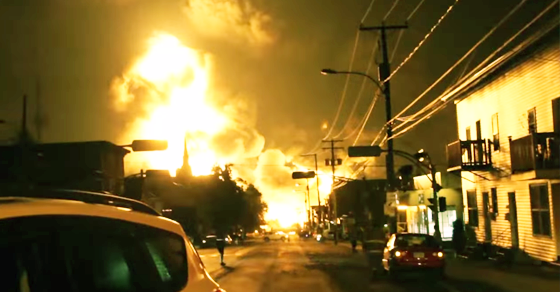 These National Post headlines about Lac-Mégantic sure look stupid today

Lac-Mégantic no safety crisis on Canada’s rails, the only ’emergency’ is runaway regulation!

Remember the headlines in the days and weeks following the Lac-Mégantic train derailment carrying highly explosive crude that left 47 dead — when conservative champions of small government attacked people for identifying a well-established pattern of cutbacks and rail deregulation in Canada?

The TSB identified “systemic problems” that led to the deadly derailment, part of the government’s laissez-faire approach to rail safety oversight. There was a “weak” safety culture at MMA — and yet the regulator took a hands-off approach to this rail company and others.

“Who was the guardian of public safety? That is the role of government. To provide checks and balances — oversight. And yet this booming industry, where unit trains were shipping more and more oil across Canada and across the border, ran largely unchecked,” TSB chair Wendy Tadros said.

In 2001, the federal government introduced a new system of oversight for Canada’s rail system. Known as safety management systems (SMS), the approach puts more onus on companies by requiring them to develop and oversee an in-house system of safety checks. The system was a shift away from traditional hands-on government oversight in favour of reviewing company records.

MMA submitted its SMS to Transport Canada in 2003, but it sat unapproved for years. When Transport Canada conducted an MMA audit in 2010, the company’s SMS was still not approved (even though the department had long stopped conducting traditional inspections). The company, meanwhile, hadn’t kept up its SMS up to date over the years.

On Tuesday, the TSB didn’t mince words about how SMS “can’t just be a paper system.” The basis of SMS requires companies to identify risks and effectively manage those risks day-to-day. “That’s the basis of SMS, but MMA did not have such a system in place,” explained Tadros.

And yet, Transport Canada didn’t seem to notice. The department checked that the company had an SMS on paper — “not how they were using it or if it was working.”

In other words, the operation went “largely unchecked” as it shipped more and more oil across Canada, said Tadros.

The problem of lack of oversight extended beyond MMA, though. “Transport Canada wasn’t doing frequent enough monitoring of the railway companies.”

And when Transport Canada did identify problems, it didn’t take decisive action.

“Transport Canada knew that MMA was having problems, there wasn’t necessarily the proper follow up,” Tadros said.

For example, between 2004 and 2012, Transport Canada issued eight warnings for violating Rule 112 (this pertains to the braking system and the securing of trains). The government, however, never took enforcement action.

But this piece is a key part of a functioning SMS — “engaging in thorough monitoring to make sure those system management systems are effective and take action when risks are identified.”

Instead, Transport Canada provided the company even more leeway over the years.

Under the Railway Safety Act, companies are required to follow a set of rules called the Canadian Rail Operating rules (CROR). So far, so good. Except companies often apply for exemptions — and Transport Canada okays them.

In the case of MMA, the company successfully sought permission (over the objections of the union representing rail workers) to operate one-person crews for freight trains carrying loaded tank cars of dangerous goods. (Following the Lac-Mégantic disaster, Transport Canada reversed itself, stipulating two-person crews were required.)

The safety board now wants to see Transport Canada do even more — namely, make sure companies actually have functioning safety management systems “that really work to manage safety.” Unattached trains should always be secured.

Here’s a small sampling of what they had to say about Canada’s apparent penchant for over-regulation (from their perspective). Throw in a charge of eco-terrorism!

My latest, on the non-threat to public safety that is Canada’s rail system. I guess evidence-based decisions are out? http://t.co/U44Eyc9vpU