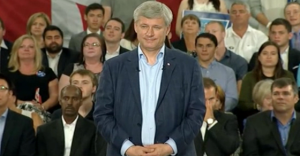 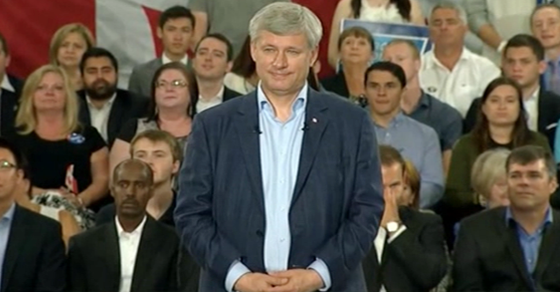 Canada's in a recession. Here is how the Conservatives are trying to downplay what's happening to the economy.

After months of bobbing and weaving, it’s pretty hard for Stephen Harper to deny Canada isn’t in recession after new numbers released by Statistics Canada Tuesday show the economy shrank by 0.1% in the second quarter of 2015 after it fell 0.2% in the first quarter.

According to Harper’s own legislation, a recession is defined as “a period of at least two consecutive quarters of negative growth in real domestic product for Canada.” In other words, the economy shrinks for six months straight.

So there you have it: two consecutive quarters of negative growth. We’re in a recession.

Here are several language tricks the Conservatives tried to downplay the recession over the last while:

Although most people were well aware the economy was in trouble back in April when Finance Minister Joe Oliver delivered his 2015 budget speech, he decided to celebrate the Conservatives’ economic record anyway by borrowing a sailing metaphor:

“We have withstood the disturbing calm of recession,” said Oliver. “The winds of prosperity again fill our sails.”

Guess the winds of prosperity have taken us for a U-turn back into another disturbing calm of recession.

2. Canada is in a “fragile economic environment”

And back in July, Oliver denied Canada was in recession and said it was too early to tell because “the numbers aren’t out yet,” though he conceded Canada is in a“fragile economic environment.”

Oliver was responding to reports from the Bank of America and TD bank that found evidence Canada was in a recession.

On Tuesday, Oliver was nowhere to be found.

Is anything in this world truly permanent?

Like the changing of the four seasons, Harper understands the human condition is marked by eternal comings and goings. Just this week he referred to the prospects of a recession as simply a “temporary effect” so the best thing to do is stay the course.

No need to do anything, then. Everything is temporary.

Recession? Nah. It’s like a charlie horse. Walk it off.

“We’ve had a contraction that has been focused almost entirely in one particular section of the economy, particularly the energy sector,” Harper said this week.

The Canadian Press found an earlier claim by Stephen Harper that the recession is limited to only one sector of the economy while other sectors were growing was “a lot of baloney.”

And Harper’s not alone – Jason Kenney subscribes to that theory too.

“Most economists define a recession as a widespread downturn in the economy,” the Defence Minister said this week in an interview with the CBC. Instead, Kenney, pinch hitting for Oliver, would describe it as merely a “discrete sectoral downturn.”

6. Whatever man, they’re all just “labels”

Why attach labels to things, anyway? Isn’t it all just words at the end of the day.

“I think it’s more important to describe the reality of a situation, rather than labels,” Harper said this week when he was asked to provide a definition of a recession.

And while we’re at it: what is reality.

7. Hey, at least we’re not in “permanent recession”

Yet again blaming external factors, Harper also trotted out one of his favourite talking points:

“If we change plans, we’ll have a permanent recession like is occurring in many other countries. We’re on the right track.”

It is not clear what a “permanent recession” actually means considering few (if any) people other than Harper have ever used the term, although the term seems to imply the economy will continue to shrink for eternity.

The Great Depression is generally considered to have lasted a decade, however, no economy in history is known to have gotten smaller year after year forever.