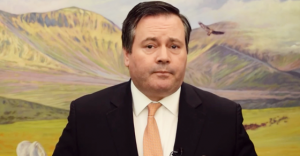 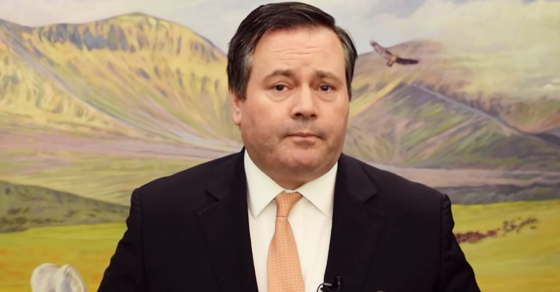 Jason Kenney's "beliefs are a mix of every right-wing crackpot theory on Earth."

Well, here we are.

Jason Kenney, former cabinet minister from the Reform-wing of the old Harper Conservatives, has been crowned the new leader of Alberta’s Progressive Conservatives.

But during his coronation speech, Kenney didn’t do much to put to rest the concerns of moderate Tories that their new leader is a touch too extreme when he invoked the memory of Ralph Klein and spoke of “severely normal” people.

“Klein used the phrase ‘severely normal’ interchangeably with a fictitious pair he called ‘Martha and Henry’ in his pronouncements about socially contentious issues.  Severely normal came to stand in for an Alberta subject who was:  adult, right-wing, conservative, fundamentalist Christian, white, straight, worked hard, eschewed big-G government, male. All others in the province became ‘not normal’ in relation to ‘severely normal discourse’.”

Whatever he meant by that, one thing’s for sure: if you spend a little time digging beneath the surface, Kenney probably wouldn’t meet most people’s definition of “severely normal” himself.

During an interview with Ezra Levant’s Rebel Media, an alt-right website disavowed by Conservative leadership candidates and slammed by media outlets around the world,  Kenney stated that he believes the “schooling system” has “hard-wired” Millennials with anti-conservative beliefs:

Kenney, who is not a parent, has previously stated he believes other people’s children would be better off taught at home rather than going to schools run by “the state”:

2. Constitutional powers are passed down to Canadians from God

During the 2015 election, Kenney told an evangelical Chinese business group in Richmond Hill, Ontario he believes the “supremacy of God” is more supreme than the authority of Parliament and the courts.

“Canada is founded upon principles which recognize the supremacy of God and the rule of law,” Kenney said, explaining that he interprets the preamble of the Charter of Freedoms to mean constitutional powers come from God – even though constitutional experts say the preamble is “all but ignored by the Supreme Court.”

Kenney also said Charter rights flow from “being created in the likeness and image of God … because if our rights are just given to us by a majority, or by the Parliament, or by the state, or by the judges, they can take those rights away.”

As a Reform MP, Kenney offered the same bogus argument on abortion and assisted-dying to claim “the right to life” is “inalienable”:

“We do not create ourselves and we therefore do not create our own rights, but we are created and rights are bestowed upon us. Fundamental human rights such as the right to life are inalienable. Even individuals cannot through the exercise of some radical personal autonomy alienate rights which cleave to the human nature of individuals because they were granted to us by our Creator.

This is what the preamble of our constitution suggests.”

Thought pumping large quantities of carbon dioxide into the atmosphere of a planet was a bad thing for its climate?

Despite what scientists tell you, Kenney tweeted last year that carbon dioxide is no biggie because trees like CO2.

Kenney also told a supporter last December that he thinks climate change is a “natural” phenomenon:

“We all know climate change exists because it’s a natural part – the climate’s been changing since the beginning of time, right?”

“We shouldn’t indoctrinate students into the most extreme view about [climate change], I don’t think we should be teaching in our schools that whatever David Suzuki says is gospel truth.”

Kenney also has pretty out-of-touch and over-the-top ideas about the fashion choices of “bohemian” youths.

In a Calgary speech last summer, Kenney condemned youths who “unconsciously” promote communism as they “walk down a fashionable part of a Canadian street these days”:

“If you go to a university campus or walk down a fashionable part of a Canadian street these days, you’re likely to see young people unconsciously displaying symbols associated with this ideology of violence …

It is essential for us to ensure that those young people now and in the future understand that if they walk down the street with a Mao cap, with a red star emblazoned on their t-shirt, with an image of Che Guevara or Lenin or Karl Marx or the hammer and sickle, that this isn’t some charming, sophisticated, bohemian image of counterculture … Yes, we must stigmatize those symbols of a inhumane ideology.”

Got that? Hope old man Kenney made himself clear, you charming, sophisticated, bohemian teenagers!

Here’s an interesting bit of trivia about Jason Kenney – he subscribes to some pretty wild conspiracy theories too.

Talking about “the Frankfurt school” & cultural marxism, Jason Kenney sounds like he’d be at home on the far right: https://t.co/0DKt1w7AEQ

Speaking at an Italian religious conference in 2012, Kenney described a small group of Marxist academics are using “multiculturalism” in an effort to “suppress completely the Christian patrimony of Canada.”

Kenney would go all the way down the rabbit hole, linking European “multiculturalism” to a “radical academic theory of cultural relativism that was really inspired by the Frankfurt school of Marxists.” The Southern Poverty Law Center has labelled that story a “conspiracy theory,” one that attempts to blame the legacy of the 1960s counterculture on a “tiny group of Jewish philosophers who fled Germany in the 1930s”:

Kenney’s not alone – the same story has been floated by InfoWars conspiracy theorist Alex Jones.

The press loves Jason Kenney, but his beliefs are a mix of every right-wing crackpot theory on Earth. #elxn42 http://t.co/l5dgobGHTm

6. Women talking about abortion? What’s next? “The Church of Satan”?

Let’s fire up the wayback machine and take a look at an interview young Kenney did with CNN:

As an anti-abortion activist in college, Kenney opposed the efforts of a group of law students to talk about abortion on campus.

Here’s what Kenney had to say about those who say “free speech” should cover providing information about women’s reproductive health on campus:

Last summer, a right-wing anti-abortion group called on supporters to purchase PC memberships in a bid to help Kenney take over the party and elect him Alberta’s “pro-life premier.”