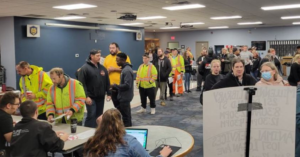 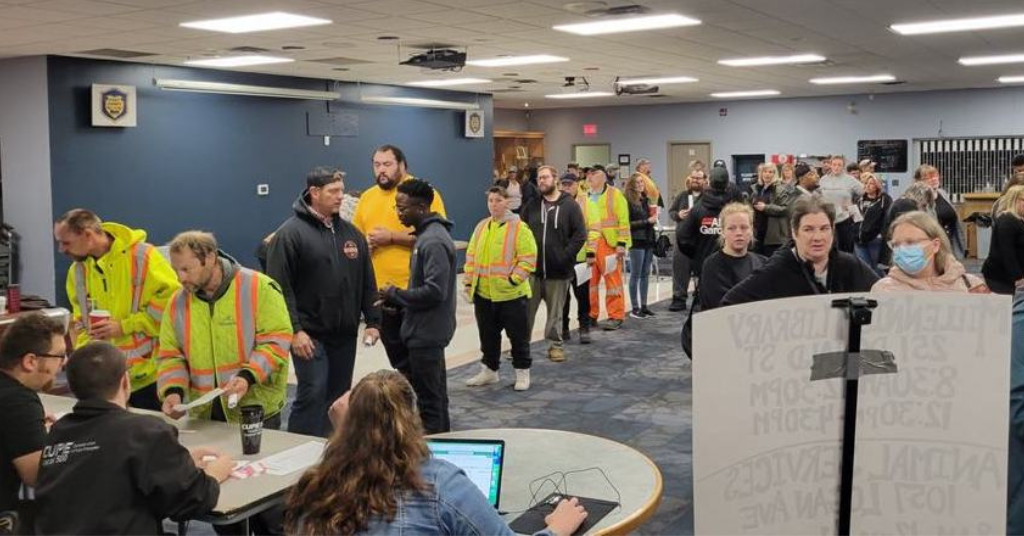 Low wages have come to a "crisis point," experts say

Thousands of Winnipeg city workers are preparing to strike for the first time in 100 years – since the 1919 Winnipeg General Strike – over low wages amid the rising cost of living.

While there is no strike date set and still time for an agreement, the workers have already started to register for picket shifts through their union CUPE Local 500. The union has a 93% strike mandate and 5,000 workers could be on the picket lines soon if the City does not table adequate wage increases.

“I think nobody really realizes the magnitude of taking the entire City workforce onto a picket line,” CUPE 500 President Gord Delbridge told PressProgress.

“We most certainly hope that doesn’t happen, we hope the City of Winnipeg comes to the table with a fair offer. We understand there’s economic challenges the City is having, but workers are having them as well.”

“Workers shouldn’t have to carry everything on their backs.”

Lots of CUPE 500 members lining up inside and outside the hall this morning to sign up for picket duty, preparing for possible strike action. #strongertogether #fairdealnow #wpgpoli pic.twitter.com/hOZ6tlkZpd

Wage decline at the City of Winnipeg has resulted in retention issues, staff shortages and reduced public services, a new report from the Canadian Centre for Policy Alternatives shows.

Many City positions in the trades now pay less than positions in the private sector and are “no longer competitive to attract workers” despite trades positions making up a “historically central component of municipal work,” the report states.

Libraries have had dozens of job vacancies and major cutbacks in hours and services on, especially on weekends in the summer.

A total of thirty CUPE 500 positions pay below Manitoba’s living wage, which the CCPA has calculated to be $18.34 per hour.

These positions include 311 Customer Service Representatives, who start at $14. 11 per hour. Vacancies in 311 positions have resulted in a nearly 50% increase in call wait times, making Winnipeggers wait an average of 11 minutes and 31 seconds for assistance in 2021.

“Public sector employers used to be an employer of choice, they used to set standards for the economy,” Harney explains. “The City of Winnipeg is setting a standard of low wage, bad jobs and that’s something that needs to change.”

For past 20 yrs, City of #Winnipeg‘s lowest wages have not kept pace w cost of living; positions are vacant and service delivery is compromised. Read new report “Falling Behind: Service and Wage decline at the City of Winnipeg”: https://t.co/0RKZFYLwqE#wpgpoli #wpg22 @cupe500 pic.twitter.com/fj7DjFsdRg

This labour dispute comes in the middle of a municipal election cycle – Winnipeggers will vote for a new city council on October 26 – and Harney hopes candidates are paying attention.

Over half of Winnipeggers are dissatisfied with this state of City services, according to a 2022 Probe Omnibus survey, and would be willing to pay higher taxes for improvements to parks, recreation, transit, municipal infrastructure and active transportation.

“The next city council needs to have a serious conversation about raising revenue and that needs to be in a progressive manner, raising revenue on those who can afford to pay the most, not low income homeowners,” Harney says.

“Winnipeg has starved itself of money and it’s now passing that on to its workers which is unfair and unacceptable and it’s creating bad services for Winnipeggers.”

Editor’s Note: A previous version of this article highlighted cutbacks to hours and services at Winnipeg libraries in the CCPA report that were based on summer hours. This article has been updated to better reflect the state of library services year round.