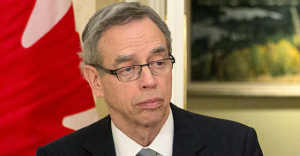 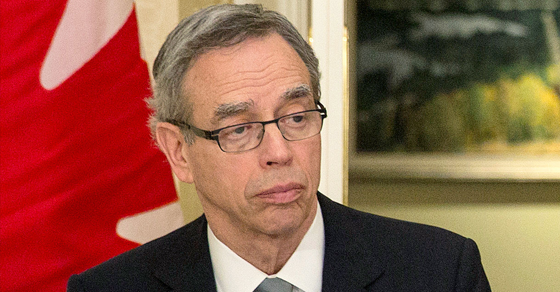 4 numbers that will disappoint Joe Oliver about Canada’s economy

Who will break the bad news to Finance Minister Joe Oliver?

Who will break the bad news to Joe Oliver?

“We’re not in a recession,” Finance Minister Oliver told reporters Thursday. “We don’t believe we will be in a recession … We expect solid growth for the year, following a weak first quarter.”

That’s definitely a glass half-full way of looking at it — economists with the Bank of America now say Canada is currently in the middle of another recession.

CIBC senior economist Andrew Grantham agreed the glass looks half-empty, pointing out “the actual numbers are clearly coming in even worse and could spark oncern that the hit from oil isn’t as ‘front-loaded’ as previously assumed.”

But no one seems to have passed the memo along to Oliver. Just yesterday, Oliver told a business crowd that the new economic data on the economy won’t affect the government’s balanced budget forecast, something one wealth management expert called “a little unusual.”

What else is a little unusual? These four numbers:

Two consecutive quarters of “negative growth” is the textbook definition of a recession.

Mining and oil were hit the hardest, shrinking for the sixth month in a row due to plunging oil, coal, and metals prices, while construction, finance, and manufacturing — all important sectors of the Canadian economy — trended downward, too. Canada’s current unemployment rate has been stuck at 6.8% there for four months straight — and it hasn’t dipped below 6.6% or drifted higher than 7.2% since 2013.

In other words, unemployment is stagnant. If the fears of economists are confirmed, the number of recessions that will have occurred during Stephen Harper’s time as Prime Minister.

Looks like Harper’s “steady hand on the wheel” might just be driving the economy straight into a ditch.