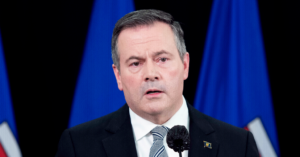 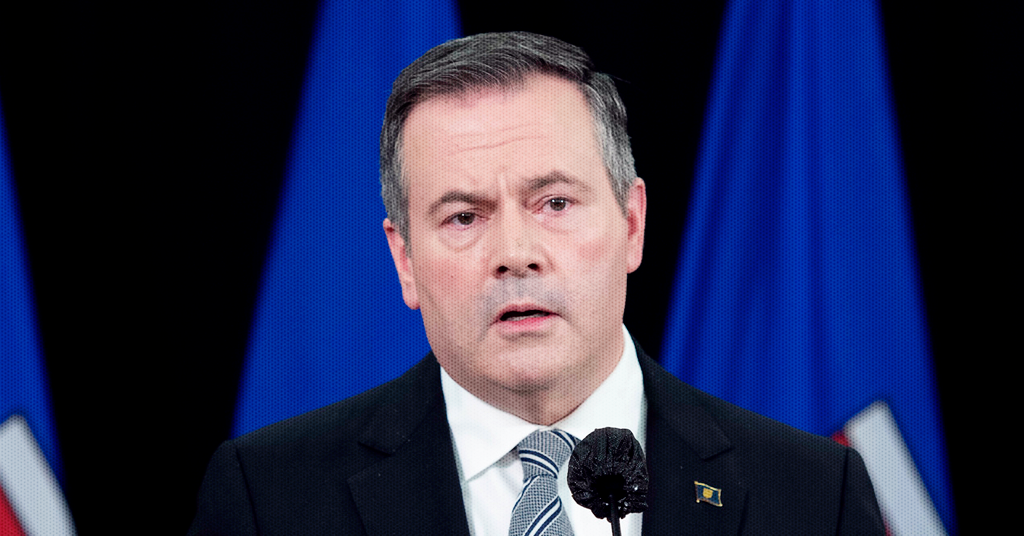 As Alberta reported 1,460 new cases of COVID-19 in one day, adding to another 20,000 active cases that represent the largest case count of any province in Canada, Kenney held a press conference announcing he would impose new restrictions, despite the fact he previously criticized the idea of doing just that.

The stricter measures announced Tuesday came after federal government officials confirmed potential deployment of army reservists to set up field hospitals in the province “as early as Saturday.”

During his press conference Tuesday, Kenney made headlines after suggesting a journalist sounded like he was working for the “NDP” when he was asked if he took any responsibility for the out-of-control spread of COVID-19 and resulting heavy loss of life in his province:

Here’s Premier Kenney being asked by @SammyHudes if he would take responsibility or apologize for the way he handled the second wave of the pandemic. #yeg #yyc #ableg #covid19ab pic.twitter.com/ks8gJKUhhN

A day earlier, Kenney accused the media of inciting panic, claiming that “in so much of the COVID coverage and debate, there has been, pretty consistently, a kind of drive towards hysteria.”

Instead, Kenney told Albertans to “keep calm and carry on.”

He later claimed those who criticized his handling of the pandemic are engaging in “Alberta bashing.”

But Kenney’s refusal to accept responsibility for the spread of the pandemic in his province stands at odds with the fact that he repeatedly ignored warnings from top health professionals leading up to his announcement of restrictions this week.

That may not be a big surprise — Kenney’s relationship with the province’s doctors broke down when he unilaterally changed their pay structure and took steps to privatize big chunks of the province’s healthcare system.

Here’s a look at a few warnings Kenney ignored from health professionals since just two months ago in October when Alberta’s second-wave began.

Edmonton Zone Medical Staff Association wrote an open letter in October warning the province that the city’s hospitals were nearing a crisis point brought on by staffing shortages and high capacity.

The concerns, which were raised just as Alberta reached a record 4,109 new reported COVID-19 cases, related to Kenney’s plans to layoff 11,000 health care workers during a pandemic, as well as worker shortages and bed availability.

“Another alarm bell ringing is the rate of healthcare worker burnout. The pandemic has been challenging for everyone, but this has been especially hard on our healthcare staff. We are nearing a crisis due to hundreds of nurse shortages. Re-deployment of a health care worker from one service to another is easier said than done. Unfilled nursing shifts due to COVID-19 exposures, illness, childcare, lack of overtime, budget cuts, and fear are having devastating implications. This has required certain healthcare departments to use mandatory overtime staffing which actually means forcing individuals to work overtime. Individual nurses are running out of steam by working significantly more hours. Morale is low. Depression is high. It is quite possible that patients will not have a nurse assigned to them.”

As active cases continued to rise, a group of more than 70 Alberta doctors sent Kenney a letter calling for a sharp, two week “circuit breaker” lockdown to stop the surge:

“If this rate of increase continues unabated, our acute care health system will be overrun in the near future.”

A week later, 430 physicians and 3 major health care unions sent a more detailed letter to the Premier calling for the same.

“We have reached a juncture where only strong and decisive mandatory measures can prevent our hospitals from becoming overwhelmed,” the letter stated.

It called on Kenney’s government to take the following actions:

Kenney announced new restrictions that day, such as limiting personal gatherings to two people at home, but the bars restaurants and even waterparks stayed open.

Athird letter in late November, signed by 341 of doctors warned that the system is collapsing and that restrictions must be enacted immediately:

“No doubt, the balance between politics, the economy and health care is challenging. However, right now, health care must prevail. We continue to break daily records of new numbers of  cases, and our ICU beds are nearly full. The pandemic has begun a slow collapse of our health-care system and time is running out to reverse it …

As you enact further public health measures, I implore you to consider the sustainability of the current plan. Surge capacity measures are a reactive, not proactive, strategy. While none of us want to have a second lockdown, I do not see any alternative at present. The curve must be  rapidly flattened to sustain our health-care system, our economy and our hope of a healthy future without COVID-19.

Please consider the weight of the burden you are asking health-care workers to carry. We are Albertans, too, and we are profoundly concerned about the health and welfare of our families and fellow citizens. I urge you to act now.“

Correction: This story has been updated to correct and clarify figures relating to new daily case counts.