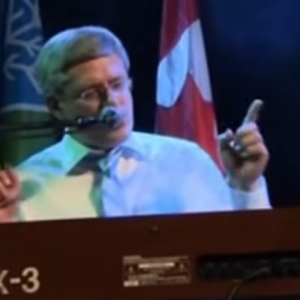 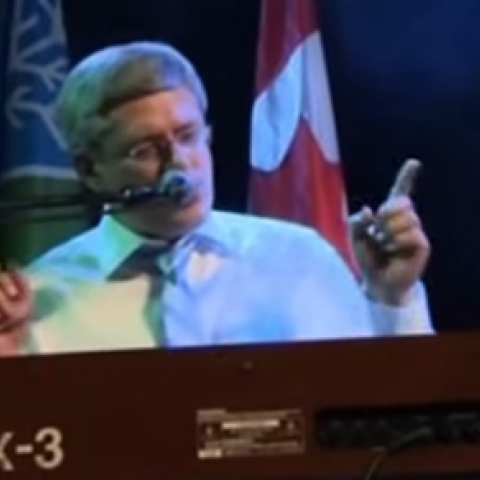 They say music is the universal language. So maybe it can offer the Conservatives a way to explain their struggling economic policies. Postmedia’s Michael Den Tandt argues the Tories “grand economic strategy” is “in ruins.” Former parliamentary budget officer, Kevin Page, calls the Conservatives reputation as strong fiscal managers a “great confabulation” and Canada’s fiscal numbers a […]

They say music is the universal language. So maybe it can offer the Conservatives a way to explain their struggling economic policies.

But nothing simplifies — or sharpens — a political message better than a campaign theme song. Especially with an election on the horizon.

Given the Tories past problems with choosing theme songs (just ask Randy Bachman), and their increasingly shaky economic record, we thought a musical marriage was in order. After all, Stephen Harper already has piano skills and a little-known guitar collection at his disposal.

Here are some potential campaign theme songs — and related slogans — to help the government explain their economic policies:

A dismal jobs record is a tough thing to explain to voters. Canada only created 32,000 permanent jobs in 2014. Meanwhile, the country saw temporary jobs increase by 110,000 over the same time period – highlighting the continued instability of our labour force. Suffice it to say, more and more Canadians are Livin’ on the Edge. Oh, and they haven’t seen a real wage increase in six years.

Songs: “Livin’ on the Edge,” Aerosmith; “Cry Me a River,” Justin Timberlake

“Livin’ on the edge. You can’t help yourself from fallin’.”

“Your bridges were burned.”

With the fall in oil prices, Finance Minister Joe Oliver has postponed the federal budget until April. Meanwhile, a new Conference Board of Canada report estimates that plunge will cut $4.3 billion from federal revenues, and a TD bank’s senior economist forecasts a potential deficit for the next two years. Critics argue the combination of ill-timed tax cuts and over-reliance on a “boom-and-bust” resource-based economy have put the Conservatives in a financial hole.

NDP finance critic Nathan Cullen has called on Oliver not to delay the budget “in the hopes that oil prices will recover,” and included other demands such as an end to the government’s costly income-splitting plan. And the Liberals have chimed in, too. In fact, some critics worry Oliver is looking to “cook the books” in April by changing the way oil prices are estimated.

Songs: “Red,” Taylor Swift; “Ain’t Got a Dime to My Name,” Bing Crosby

“Spinning round in my head … burning red.”

“Like driving a new Maserati down a dead end street.”

“Ain’t got a dime to my name, what a terrible shame.”

“Just found a hole in my shoe and my stocking shows through.”

So the whole “energy superpower thing” isn’t working out. With the falling price of oil, the Conservatives are being called out for putting “so many strategic eggs in this one basket.” Even a former chief economist for CIBC World Markets says the government has been “playing a losing hand.” Meanwhile, two former high-level bureaucrats from the Ministry of Finance describe “the peril — and the temptation — of basing a political strategy on the performance of a commodity economy.”

While the oil crisis opens up opportunities to re-invest in areas like manufacturing and clean energy, how can the government explain their ill-fated policy decisions via song? They could turn to Britney Spears or a Golden Oldie.

Songs: “I’m a Slave for You,” Britney Spears; “I’m Putting all my Eggs in One Basket,” Irving Berlin.

“I am your slave you’re the stone to my grave.”

“I’m betting everything I’ve got on you.”

“I’m giving all my love to one baby. Lord help me if my baby don’t come through.”

How to explain tax cuts that increase inequality and starve the treasury?

Contributing to Canada’s potential deficit, and the delayed budget, is the Conservatives family tax plan, which includes boutique tax cuts and income-splitting (that will only help on 1/10 households and cost $2 billion annually). The combined cuts are expected to reduce the treasury by $27 billion over six years — including $4.6 billion in the fiscal year of 2015-16.

Joe Oliver says “our Conservative government’s plan for the economy is working.” Critics argue that their “costly tax giveaways” could only make matters worse in the current economic climate.

Oh, and multiple rounds of corporate tax cuts are turning into “dead money,” according to an IMF report in 2014 — not the promised investment and job creation.

“Whatever you do, I’ll be two steps behind.”

“It’s our party we can do what we want.”

One of Canada’s big banks says “rising income inequality in advanced economies is posing a threat to economic growth and long-term prosperity.” TD Bank is calling for strategic public investments in housing, child care, post-secondary education, health and social services to reverse the trend of inequality. (For more on inequality in Canada.)

But the Harper government has done very little to address income inequality, instead remaining chiefly focused on “reducing the size and ambition of the federal government” and failing to invest in areas that would reverse the trend.

In fact, health care transfers are set to decline $36 billion over the next 10 years, and the government has cut direct program spending for four years in a row.

In the coming election, maybe Meat Loaf can help the Conservatives explain their lack of investment in priorities that can improve the lives of average Canadians.

“One less problem without ya.”