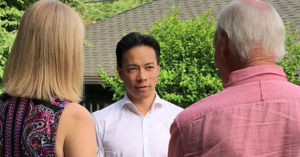 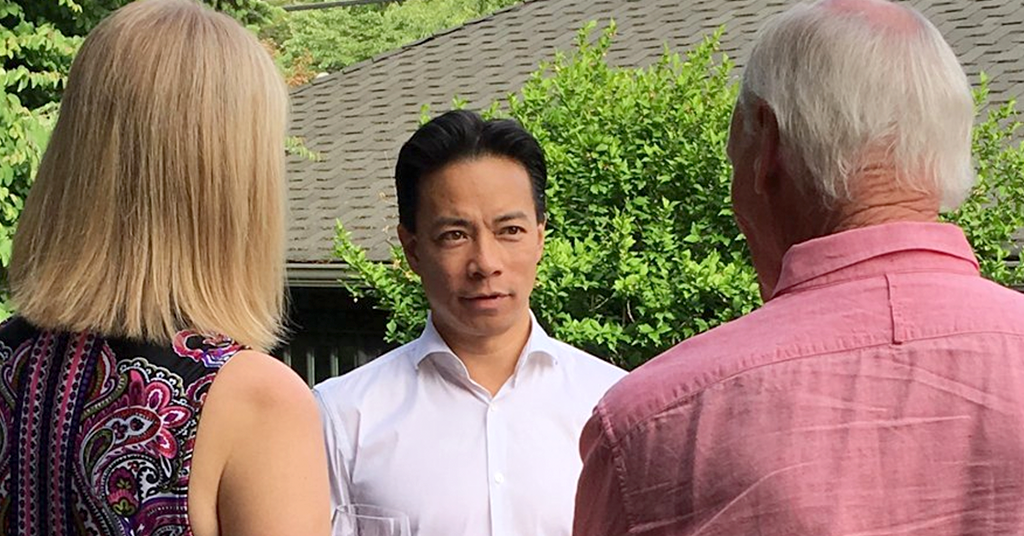 Although he does not highlight this experience on his online biography or LinkedIn, Sim was the co-founder and board director of a company that had a documented history of questionable labour practices and operated at facilities flagged by inspectors for “health and safety hazards.”

According to corporate records, Sim served on the board of directors of CareSource Staffing Solutions Inc., a company that operated in BC from 2003 to 2015 and placed staff at eight long-term care homes across the province before it was dissolved in 2019.

After the former BC Liberal government passed legislation in 2002 allowing for the contracting out of health-care services, many long-term care centres began replacing nursing and care staff with contracted workers.

In one interview with the Globe & Mail in 2004, Sim explained that the company chooses not to advertise itself publicly and “tends to not discuss business.”

“The environment is such that it is a bit confrontational,” Sim, who was described as a partner in CareSource, is quoted as stating. “We don’t advertise but everyone knows who you are.”

Over the years, some of the senior centres that had staff provided by CareSource were documented as having unscrupulous conditions and safety violations for residents, as well as questionable labour practices – including firing unionized staff, secret pay cuts, and overall impacts to quality of care.

Sim did not respond to PressProgress’ request for comment regarding his time on the board of the company and whether he was aware of criticism of the company’s labour practices or any issues relating to its health and safety record.

In a 2004 interview with the Times Colonist, Sim publicly addressed some allegations of low wages and lack of benefits for staff. While Sim would not confirm how much the contracted workers were paid, Sim stated: “We offer a fair compensation plan with benefits and competitive wages.”

According to the Times Colonist, CareSource Solutions took over the care aide contract at Victoria’s Beacon Hill Villa in March 2004.

Beacon Hill Villa, which was owned by a company called Retirement Concepts, made headlines in 2007 over allegations of neglect after it was cited for dozens of health and safety violations by provincial inspectors.

The Tyee reported that from June 2004 to June 2005, Beacon Hill Villa was fraught with issues including the death of a 91-year-old woman who slid out of her wheelchair and was strangled by the restraint belt. Vancouver Island Health also found that Beacon Hill Villa residents had more incidents of falls than residents at other care homes.

A Vancouver Island Health Authority inspectors’ report also cited that the facility smelled strongly of urine, as well as some residents waking up in their own urine because they were not taken out to the bathroom.

According to The Tyee, “inspectors handed Beacon Hill Villa a ‘high’ health and safety hazard rating on 14 separate occasions in the first 10 months of 2004.”

At the time, the Retirement Concepts chief operating officers Mary McDougall blamed the difficulties on changes to how the company delivered their services.

She added that pre-2004 (before CareSource took over the contract), Beacon Hill Villa had an “outstanding” reputation. 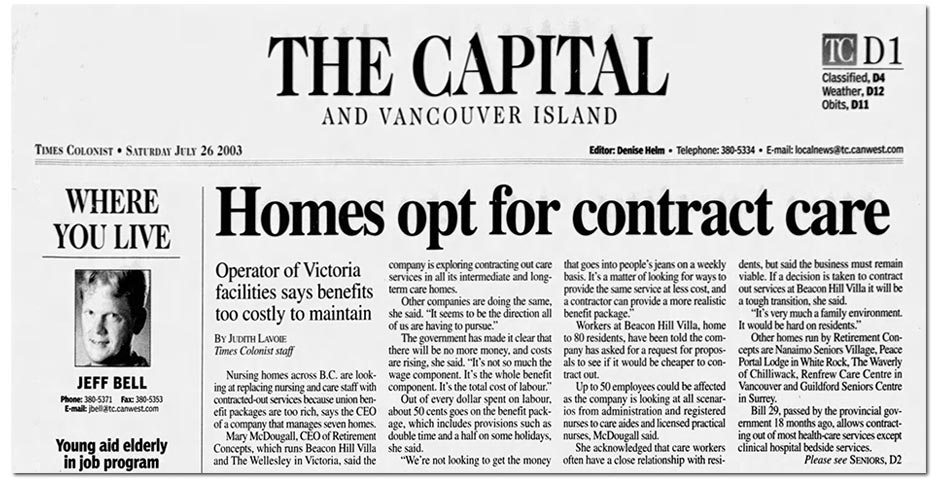 Jimmy, whose mother was a resident at the Nanaimo Senior’s Village and requested to only be identified by his first name, recalls having significant concerns about his mother’s quality of care under the company Sim was associated with.

“CareSource was part of a model of service delivery that just wasn’t working,” Jimmy told PressProgress. “We had during that time significant staffing shortages and other forms of constant staffing instability that translated into significant concern on the part of families about the loss of continuity of care.”

Jimmy said that staff who were familiar with residents were laid off and replaced by contract workers who didn’t have the same understanding of the patient’s unique needs.

“(There were) brand new staff members, for example, meeting my mother for the first time and not knowing in any kind of intimate way, her health history, what to look for, signs that she was in trouble or signs that she was prospering,” Jimmy added. 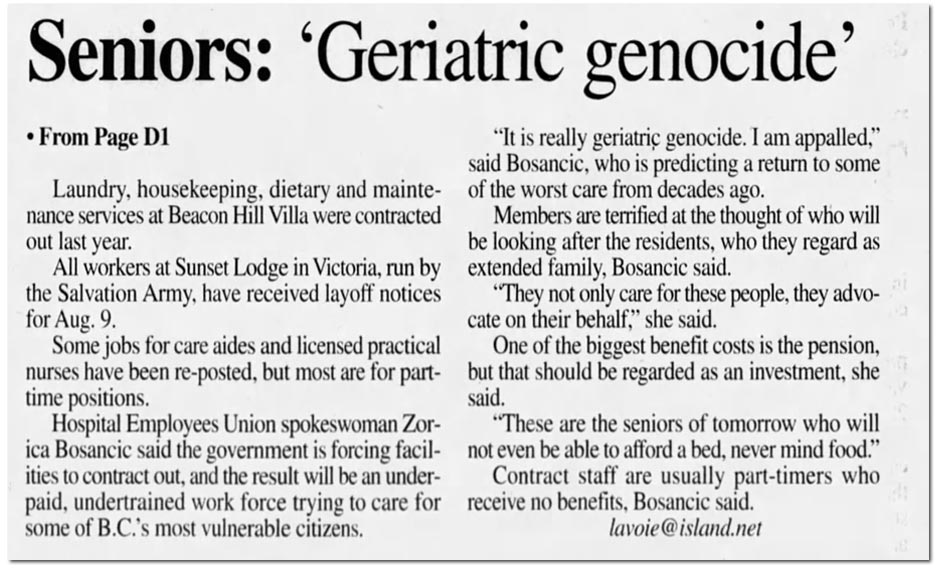 According to Jimmy this directly impacted patient care.

“Finding efficiencies is a word that they like to use a lot. But really what that means is cutting down on services,” Jimmy said.

“You want to attract and retain quality workers, so you have to support them, treat them, give them a good living wage, you have to ensure stability for them, and you have to sort of value what it is that they do not just see them as liabilities on a ledger sheet, but see them as resources that are going to provide good services to the community that they serve.”

In addition to issues being cited with the level of care provided by contracted staff, the Employment Standards Tribunal also found in 2007 that the company failed to honour employment agreements made when CareSource took over contracts.

“CareSource, when taking over as the care contractor for Nanaimo Seniors Village, did not honour previous employment service, meaning wages and benefits were not protected in the transition between contractors. Some employees were not rehired by CareSource,” the tribunal stated.

In the same year, staff at the home stopped working overtime after being surprised by cuts on their pay cheques. According to an article in the Nanaimo Daily News in May 2007, staff had sick pay and holiday pay cut without notice. 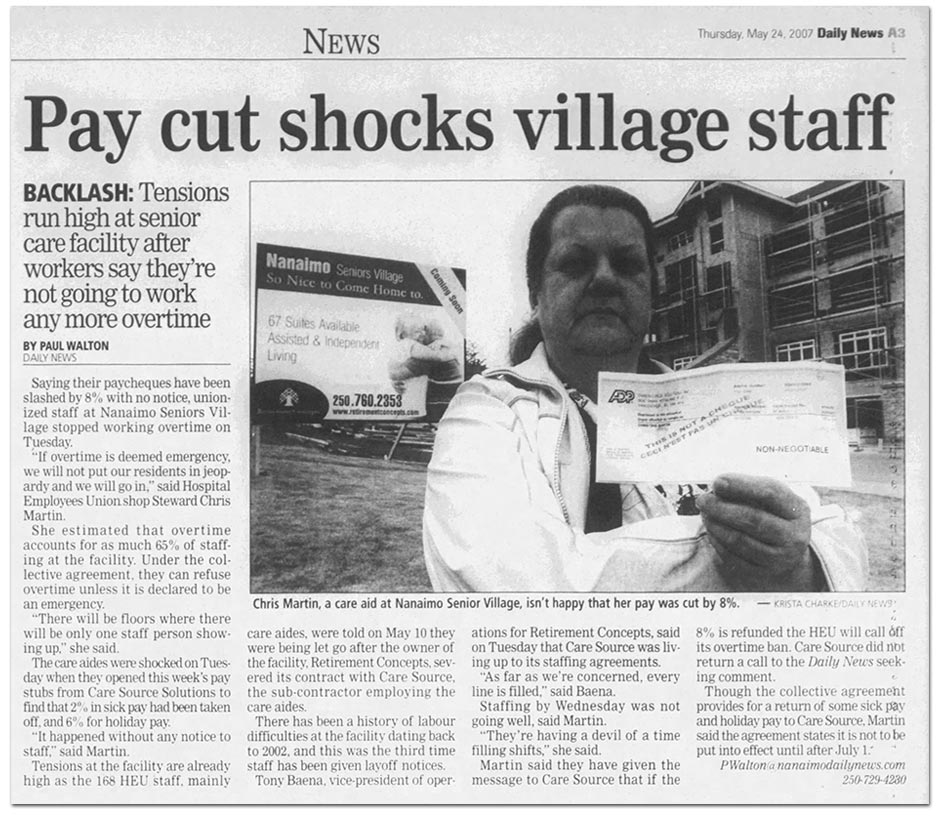 According to Hospital Employees Union spokesperson Mike Old, companies like CareSource were born out of the BC government legislation of the time, allowing for the contracting out of services.

“There were a number of companies that sort of set up shop after Bill 29 because there was a lot of work available,” Old told PressProgress. “Some contracting out was about dragging down labour costs. There was no secret about that.”

“A lot of these companies who were in and out of that particular segment of the long term care sector in BC, they kind of made some money for two years and then got out of the field.”

In October 2006, CareSource fired workers at West Van Care Centre after they voted to unionize with the HEU. The decision was later reversed, but they were then fired again in 2007 after CareSource’s contract was terminated by the operator of the facility.

In June 2007, another 168 workers were terminated at the Nanaimo Seniors Village after Retirement Concepts ended their agreement with CareSource, explaining: “Caresource has been unable to provide the required level of service within acceptable financial parameters.”

Other news reports from the time show three care homes staffed by CareSource were owned by the aforementioned company Retirement Concepts, a since discontinued company whose director, Azim Jamal was a donor to the NPA in 2018 while Ken Sim was running with the party.