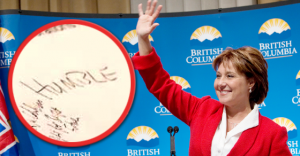 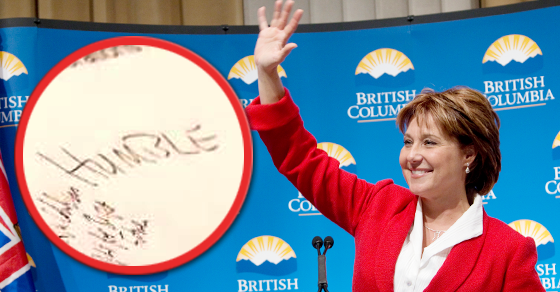 TV camera zooms in on Christy Clark’s podium, shows note reminding her to be ‘humble’

Note to self: don't be a jerk.

Note to self: don’t be a jerk.

You can draw your own conclusions, but Christy Clark looks like she’s trying her darndest to maintain her composure and not come across like she’s desperately trying to cling to power in what might be her final days as British Columbia’s Premier.

TV cameras “caught a glimpse” of something they weren’t supposed to see during a press conference Tuesday as Clark told journalists she doesn’t plan to step down for weeks, choosing instead to not back down without a fight by facing a non-confidence vote that she will likely lose.

Notes scribbled on Clark’s talking points appears to show Clark needed a little reminder to not forget to be “humble.”

One of our cameras caught a glimpse of the premier’s notes at her presser today. One word definitely stood out: #bcpoli @CTVVancouver pic.twitter.com/YhpfYYQEuC

It’s just too bad she didn’t jot down a little reminder to be “humble” before Clark dismissively turned her back on a voter named “Linda” last month, an encounter many described as “arrogant.”

Come to think of it, maybe Clark should have covered the Premier’s Office in post-it notes reminding herself to be “humble” for the last six years she’s been in power?

As Maclean’s noted last month, Clark’s addiction to corporate money, $50,000 salary top-ups and $3,000 oyster dinners expensed to taxpayers did nothing but present herself as “a symbol of power and privilege” with a knack for “appearing arrogant and out of touch.”

If only Clark had remembered to be “humble” at some point before she became desperate to stay in power.