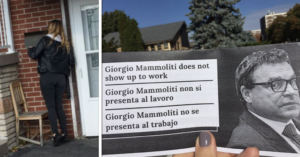 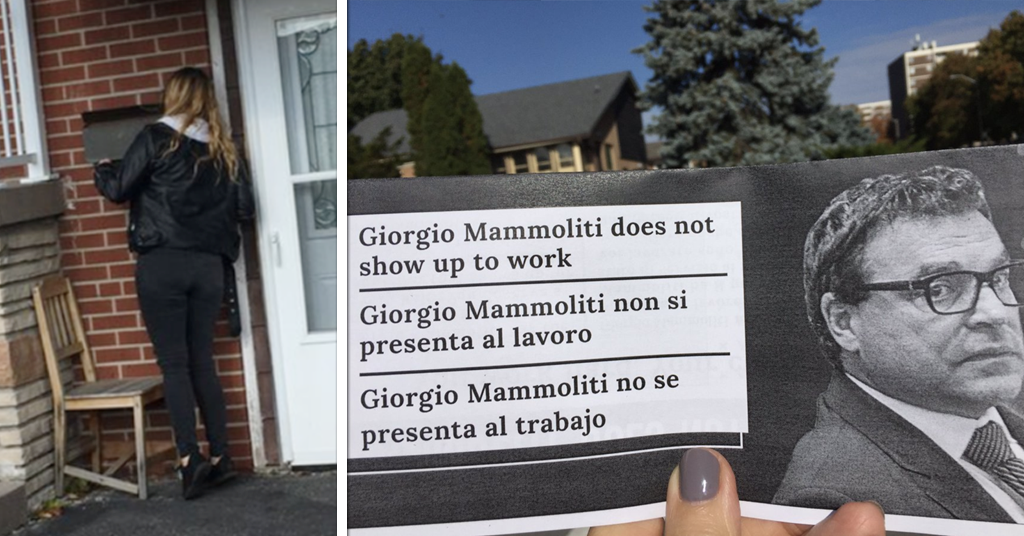 Toronto city council candidate Giorgio Mammoliti’s campaign appears to have been caught red-handed stealing leaflets from the mailboxes of his own constituents.

Helen Kennedy, a candidate for school trustee in the Toronto District School Board’s Ward 4, told PressProgress she was driving down a residential street getting ready to canvas when she spotted a “woman going up the driveways and removing something from the mailboxes.”

Kennedy followed the woman and snapped photos, later tweeting that she “caught this woman stealing people’s mail – the Progress Toronto ‘no Mammoliti’ leaflet!”

This is another picture of the mail thief – notice the @progresstoronto leaflets in her hand. pic.twitter.com/5qgCVUZpJX

A closer look at the photos back up Kennedy’s allegation: the photos show a woman fishing through a residential mailbox and walking away with leaflets produced by Progress Toronto, an organization working to support progressive candidates across Toronto for city council.

According to an analysis by the Toronto Star, Mammoliti had the worst attendance record on city council in 2018, missing nearly half of all votes (48.7%).

Between 2014 and 2018, Mammoliti missed 43.1% of all votes, which is also the worst record on city council since the last municipal election.

It’s a beautiful day to tell people NOT to vote for Mammoliti #TOpoli pic.twitter.com/cnoKhLkF0J

“Some of the neighbours gathered as I confronted the woman,” Kennedy said. “I told them that she was stealing things from their mailboxes.”

That’s when a man “dressed in a blue ‘Team Mammoliti’ jacket” who was putting up Mammoliti election signs nearby intervened and denied she was stealing mail.

“He argued that she was distributing leaflets,” Kennedy said.

The situation quickly escalated and Mammoliti’s campaign worker began yelling at the school board candidate and her partner. As neighbours came out of their homes to see what the commotion was about, Kennedy said “the man returned to his car” and “the woman started walking up the street.”

Kennedy’s partner followed the Honda further down the street and saw the woman hop inside the man’s car. The two drove away together.

And here’s who came to defend her!! Threatened to sue me. pic.twitter.com/kduLtLeE7x

Kennedy said she is “asking all candidates and their campaign teams in Ward 7 to stay vigilant and report further illegal and illegitimate campaign tactics from the Mammoliti campaign.”

“I’ve lived in this ward for over 50 years,” Kennedy said. “I’m used to Mammoliti’s dirty politics.”

Mammoliti’s campaign did not reply to a request for comment from PressProgress.