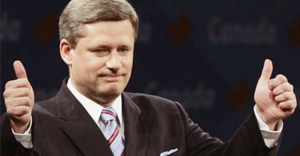 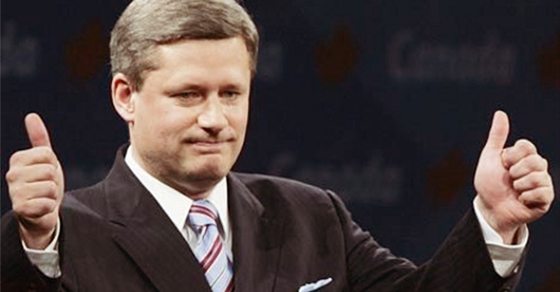 Canada's national nightmare is officially over.

Canada’s national nightmare is officially over.

On Friday, August 26, 2016 at 9:08 am Eastern Standard Time, Stephen Harper, Canada’s 22nd Prime Minister, addressed the nation by way of a video selfie randomly tweeted to supporters and announced his immediate resignation as a member of parliament from inside an empty, poorly-lit conference room somewhere on Parliament Hill.

Harper’s departure from politics prompted some loyalists to extend thank-yous on Friday:

Thank you Prime Minister @StephenHarper. My statement on his departure from politics: https://t.co/VfnbY4Gncz pic.twitter.com/lhg3mbp30r

Interim Conservative leader Rona Ambrose declared that “the record prime minister Harper leaves in office is a proud one.”

Unfortunately, historians will likely view Harper’s legacy with less sympathy than his loyal supporters – polling finds Harper is the least popular Prime Minister of all time for most Canadians living today.

Here are eight headlines from media outlets in Canada and around the world that help illustrate why so many Canadians won’t be saying “thank you Stephen Harper” any time soon:

One of the biggest and most prestigious newspapers in the world, a New York Times headline during the 2015 election campaign connected Harper’s xenophobic opportunism and his “Conservative Party’s scapegoating of Canadian Muslims” to the hate-fueled antics of Donald Trump: Around the same time, The Economist observed Harper had resorted to “Muslim-bashing” as a way of distracting voters from his “weak economy.”

The international news magazine linked Harper’s nativist rhetoric to a spike in “hate crimes” targeting Muslims, including assaults against a woman wearing a niqab in Toronto and a pregnant woman wearing a head scarf in Montreal. Hoping to build on their racially divisive election strategy, Harper’s Conservatives rolled out a “barbaric cultural practices hotline” for Canadians to report crimes, although this idea ended up being relentlessly mocked and ridiculed, eventually causing the MP who announced the idea, Conservative leadership hopeful Kellie Leitch, to tearfully expressed her “regret” on national television.

But as a headline from on the American news website Salon pointed out, “white people don’t have to worry about Canada’s new report your neighbour hotline.” True. During a 2015 election debate on the economy, Harper defended his decision to strip healthcare coverage from refugees – something a federal court deemed “cruel and unusual” as well as completely unconstitutional – on the grounds that it was something “old stock Canadians agree with.” Criticized from all sides of the political spectrum, critics and legal experts loudly denounced Harper’s controversial anti-terror legislation Bill C-51 as a threat to free speech and Canada’s Charter of Rights and Freedoms, as a CBC headline noted last year.

C-51 granted extraordinary new powers to CSIS, Canada’s spy agency, with legal experts warning the new powers would lead to a “chilling effect on freedom of expression and association.” Often viewed as paranoid and overly-controlling, the Harper government gained a reputation for declaring war on any person, group or thing that challenged its agenda.

In 2012, the Globe and Mail’s editorial board slammed the “campaign of intimidation” against charities, advocacy and environmental groups (many of whom complained of being targeted for selective “political activity” audits by Canada Revenue Agency). The Globe pointed out that the Harper Conservatives “demonizing” charities as foreign radicals seemed at odds with Canadian values like free speech and an open society. Stephen Harper subscribes to a “worldview and politics of fear” that’s more aligned with George W. Bush than what most Canadians believe in, as an article in the Guardian argued out last year.

Along with counting one another as allies in their fight to do nothing about climate change, both leaders’ attempts to gut environmental regulations, a mutual contempt towards the United Nations and a shared belief in disastrous economic policies, Harper was also an enthusiastic supporter of Bush’s invasion of Iraq. As leader of the Canadian Alliance in 2002, a CTV headline drew attention to a conspiratorial fundraising letter Harper penned blasting the Kyoto Accord as a “socialist scheme” devised to “suck money out of wealth-producing nations.”

That may have not only foreshadowed Harper scrapping Kyoto, but also a decade of obstructing climate change efforts, refusing to regulate oil and gas and gutting key environmental protections in legislation covering everything from navigable waters and fisheries to environmental assessments. To wrap things up, maybe no one can sum up the Harper years better than Stephen Harper himself.

As polls showing Harper with historically high negative impressions from Canadians suggest: that’s just not the way we do things in Canada. And that’s all that needs to be said about that.