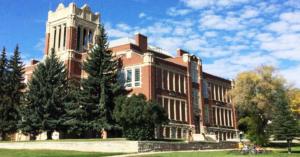 As students get ready to head back-to-school in the middle of a pandemic, some schools in Saskatchewan are cutting back on cleaning staff to save money.

Prairie South School Division, which covers 40 schools in Moose Jaw and southern Saskatchewan, is cutting over 20 hours of custodial services a day and reducing full-time positions to part-time, according to the Canadian Union of Public Employees.

“That amounts to 20 hours a day that would be otherwise used to clean the surfaces ensuring students and school workers are kept safe,” CUPE explains in a fact sheet. “Cutting corners on our school’s hygiene will leave students, staff and the community at risk.”

“Many school divisions also lack the boost to school cleaning staff needed to engage in the more rigorous cleaning and sanitation regime of classrooms, washrooms, and common touch points,” the letter stated.

Neither Prairie South School Division nor the Ministry of Education responded to multiple requests for comment from PressProgress.

In June, the school division admitted it was facing a deficit due to underfunding by the provincial government: “We do not have the money we need,” PSSD Education Director Tony Baldwin said.

A representative from CUPE told PressProgress custodial staff forced into part time positions could increase the risk of transmission as workers may need to pick up second or third jobs to pay the bills.

“We’ve seen the dangers of having employees forced to work multiple jobs in high risk settings in the long term care sector,” Simon Enoch, Director of the Saskatchewan Chapter of the Canadian Centre for Policy Alternatives told PressProgress.

“It just multiplies the potential for infection. Seems extremely short sighted insofar as you would think school divisions would be trying to minimize transmission risk as much as possible in preparation for reopening.”

During a press conference Tuesday, the Saskatchewan Teachers’ Federation raised concerns that Premier Scott Moe’s “Safe Schools” plan does little to address chronic under funding of cleaning services in public schools needed to prevent the spread of COVID-19.

“Who will be doing the work of the extra cleaning that is being suggested?” said STF President Patrick Maze.

“It’s easy to suggest that extra cleaning should be done but given that at least one school division just recently laid off staff, cleaning staff and others have paired down maintenance and and cleaning staff to bare bones — minimal cleaning for several years now – who is going to be doing that work?”

The Saskatchewan School Boards Association said Moe’s back-to-school plan falls “short of the significant investment we hoped for to help address some of the challenges in classroom.”