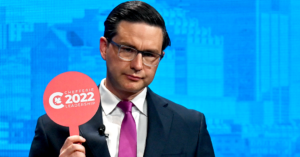 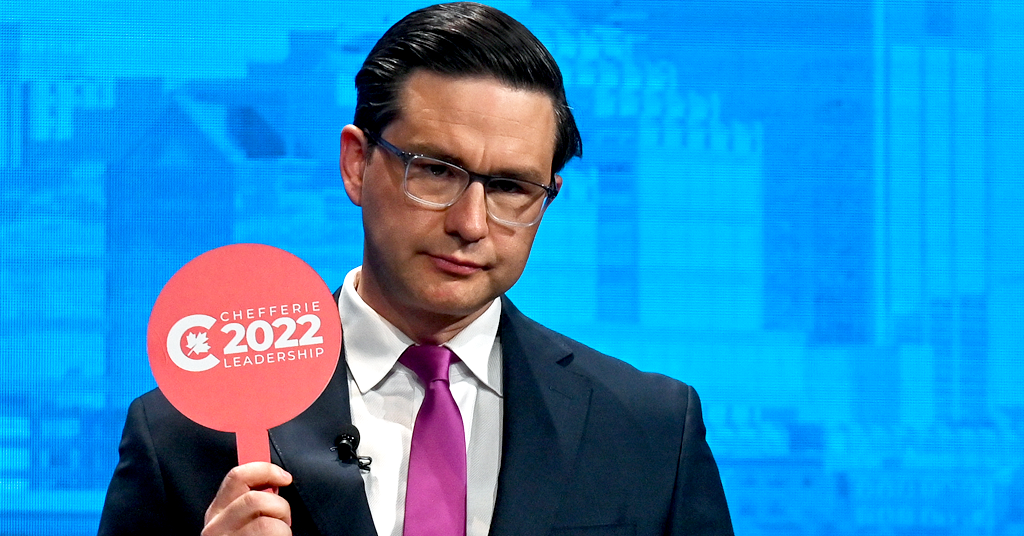 The “Free Speech Guardian” would investigate “academic censorship” complaints and be given the power to recommend “reductions in direct federal grants to specific universities that fail to protect free speech and academic freedom.”

My message to universities:

I will appoint a Free Speech Guardian, a retired judge, to ensure academic freedom is defended.https://t.co/6QcoS5OKq8 pic.twitter.com/FNkUTQQ5k6

But Canadian academics say Poilievre’s plan is actually an attack on academic freedom.

“The danger of trying to dictate to universities what free expression they should or should not allow is we suddenly get into a situation where governments are telling institutions what they should protect, and perhaps what they shouldn’t protect,” Canadian Association of University Teachers President David Robinson told PressProgress.

Despite Poilievre’s claims, university faculty currently have more freedom to debate controversial ideas, criticize the government and their employer than most workplaces in Canada, thanks to academic freedom clauses found in faculty collective agreements, Robinson explained.

There’s not a single workplace in Canada where free speech is better protected than at universities.

This is more stupid shit for dumb people in the far right camp.

Now, if we really want to think about protecting speech how about a law protecting workers’ collective voice! pic.twitter.com/7RUxowYnFl

“Academic freedom is not legislated by the government, but it is found in contract law in collective agreements between faculty and universities,” Robinson said.

“Academic freedom is a professional right. It belongs to academics, to faculty, to professors. It’s the right to teach, to conduct research, to participate in the governance of the institution and also to participate in public debate without any censorship.”

If a faculty member believes their academic freedom has been violated, the faculty union provides legal resources and a grievance process to challenge the employer’s decision.

However, Robinson says an increasing number of academic staff in Canada are hired on short term contracts which “restricts many faculty from fully exercising their academic freedom.”

According to a 2018 CCPA report, over half (53.6%) of all faculty appointments in Canada are hired on contract, and 80% of those contracts are part-time positions.

“What academic freedom means is that the employer, in this case, the university, can’t fire you for your views. However, if you’re on a short term contract, they don’t need to fire you. They simply just don’t renew your contract,” Robinson said. “So having job security, for contract academics, that is the way in which you can protect academic freedom.”

Michael Lynk, a law professor at Western University, says the language of academic freedom clauses can also be contested and debated regularly between faculty and universities during contract negotiations – this allows the protections of academic freedom to expand or evolve over time, like a living document.

“It’s the parties themselves, university administration and faculty associations, who have control over the wording in their collective agreements on academic freedom and on freedom of expression,” Lynk told PressProgress.

“Of the academic freedom clauses that I’ve seen, and I’ve read many of them from universities across the country, they’re very broad, they’re very protective.”

Lynk believes Poilievre’s proposal is a “red meat argument” to inflame the conservative base about ‘overblown’ public controversies that misrepresent how academic freedom works in Canada.

“Universities are that social location in any society, including Canadian society, where new forms of thinking, particularly critical thinking regarding issues of gender, race, age, human rights in general, are generally first emerged and get debated. That’s why you’ll find the debates on university campuses with respect to so-called “woke issues” are particularly, let’s say, ferocious in their back and forth.”

Charles Smith, President of the Canadian Association for Work and Labour Studies, says academic freedom has historically been fought for by academics themselves – including those from marginalized groups.

Academic freedom was a significant reason faculty members began unionizing across Canada in the 1970s. This wave of unionization coincided with the growth of new academic fields, such as Women’s Studies and Native Studies.

“Truthfully, universities have not been a place where marginalized groups have been completely welcomed,” Smith told PressProgress. “It’s only recently through organization, unionization, we’ve started to see real explosions of topics that mainstream society might deem as controversial, but in university have become more regular.”

Charmaine Nelson, an art history professor at the Nova Scotia Academy of Art and Design and founder of the Institute for the Study of Canadian Slavery, wrote that much of Canada’s Black scholarship has come from “under-funded structures” in post-secondary institutions. The first minor in Black Studies was only introduced in Canada in 2016 at Dalhousie University. At Concordia University, Black students and faculty organized to create a Black Studies minor in 2018, but stated the university needed to hire more Black faculty to implement the program. After massive Black Lives Matter protests against police violence in 2020, universities across Canada were pressured to implement more courses and certificates in Black Studies.

“Conservatives would argue that the left and far left is all that dominates. There’s absolutely no truth to that, in my experience, and I’d love to see the evidence that somehow that is true,” Smith said.

“The real challenges are that social sciences and humanities, fine arts have been increasingly under attack because of the corporatization of modern universities.”

Increased reliance on corporate donations due to government underfunding means fields of science, technology, engineering and math receive the bulk of financial support while arts faculties that produce critical scholarship on history, gender, race and other social issues are left with dwindling resources.

Smith believes Poilievre’s proposal is a “federal overreach” and “massive government intrusion” that does little to actually address threats to academic freedom on campus.

“If Poilievre was really serious about protecting freedom of expression on campus, he would advocate for unionization,” Smith said, but noted that “of course that doesn’t fit his ideological far right agenda.”

“I don’t think he really understands what campuses are about and what academics actually need.”