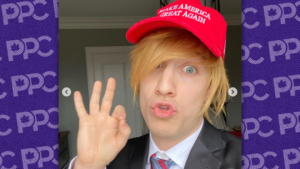 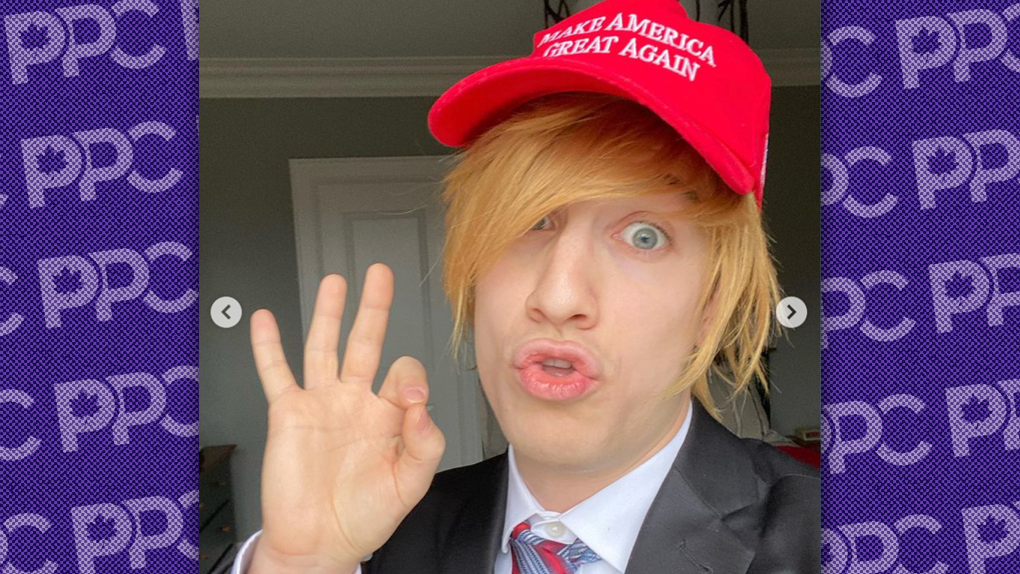 PPC candidate says he stands behind his ‘art’

But Mario Greco, the People’s Party candidate in Vaughan–Woodbridge, defends the artistic merit of his game, arguing that what it actually aims to do is “unite humanity.”

Before becoming a high school computer teacher at York Region District School Board, Greco studied video game design at the University of Ontario Institute of Technology.

While at UOIT, Greco found himself in controversy over a game he designed called “Happy Culture Shootout,” a Space Invader-style game that allows players to control a space ship that shoots laser beams at caricatures of various identity groups.

“This game is about an alien ordered to invade Earth and transport all humans to Happy Land,” Greco says on his personal website, which includes other games he authored like “Die Mauer,” about a “young misunderstood hero” who seeks to liberate post-war Germany from Soviet rule.

Despite claiming his game is meant to “end global war and discrimination,” Greco notes: “Some people were offended by this game.” 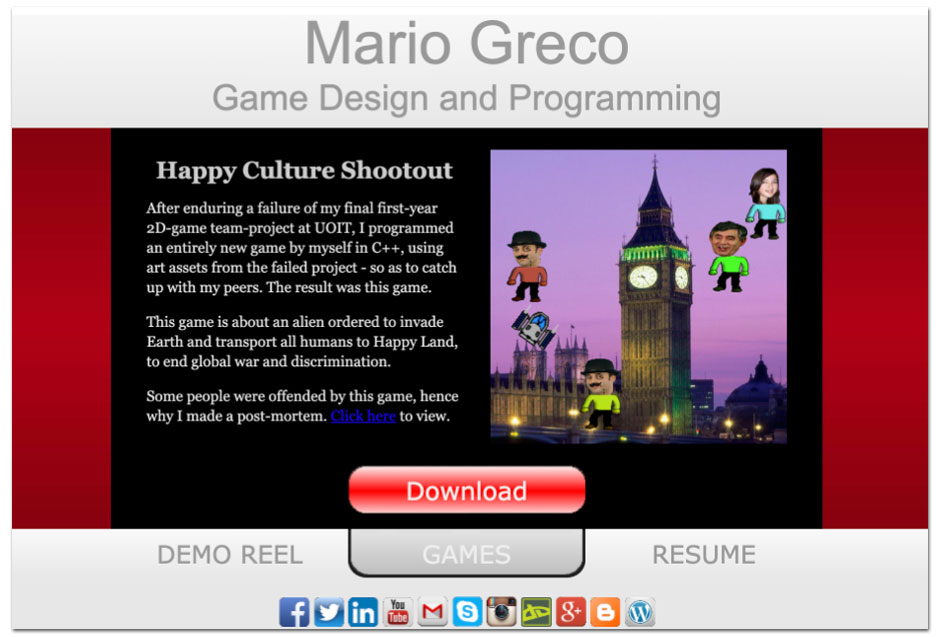 The People’s Party candidate is careful to note that players do not kill anyone in the game, but instead send them to a place called “Happy Land.”

Greco believes there are other misunderstandings about the premise of his game.

In a since-deleted video obtained by PressProgress, the People’s Party candidate delivered a presentation to UOIT students several years ago offering his “post mortem” on his game.

Greco expresses surprise that students and faculty reacted negatively to the game, with one calling it “the most racist game I’ve ever played.” Greco says his game is “not racist in the slightest,” noting he made fun of his own Italian heritage. He also claimed some students thought his “gay Pride parade level” was “hilarious.”

“My friends and I love people of all cultures and we also love humour of all types,” Greco says in the video. “That includes harmless racist jokes.”

“This game was intended to make a joke about how ridiculous cultural stereotypes are so we can all laugh about it together and move on with our lives.”

Today, the high school teacher says he is unsure if his video game was racist.

“People can believe what they want of pieces of art,” Greco told PressProgress. “These days anything could be perceived as racist.”

At least one stereotype didn’t make the final cut of the game, however.

During his presentation, the People’s Party candidate offers an “interesting side note” about the game’s “Israel level.”

According to Greco, a faculty member “strongly recommended” he remove “Jewish stereotypes” from the game: “He was like ‘no, get rid of it, immediately, don’t have any religious content whatsoever’. I know that subject is very, very touchy.” 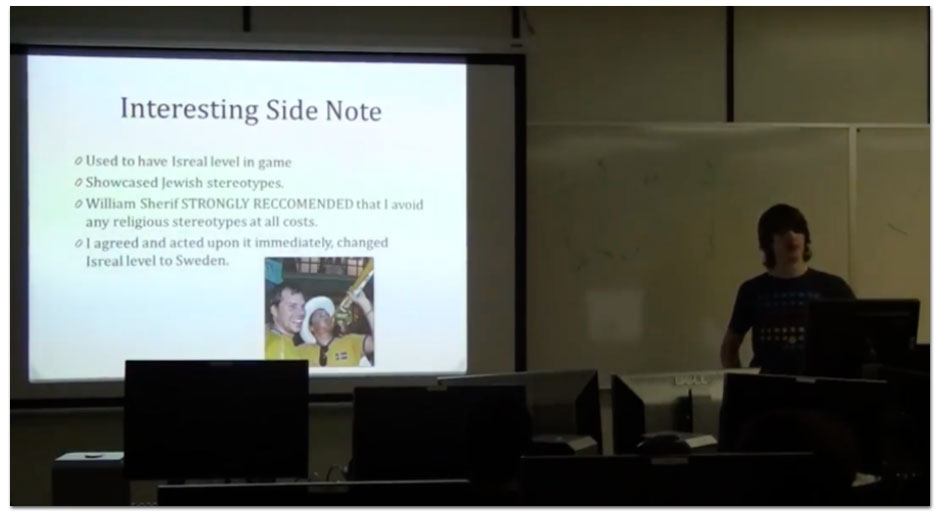 Greco is philosophical about the controversy.

“One might say that it was too early to release that type of game, as society is still not in a state to accept unconventional games,” Greco says in the video.

He draws parallels with a game called “Super Columbine Massacre RPG,” which allows players to simulate the 1999 Columbine High School massacre that left 13 dead and 21 injured, describing it as a “legitimate form of art.”

“Some may consider it to have done more justice for the victims of the tragedy than any news coverage,” he says, but suggests its message was misunderstood too.

“When it comes to art,” the high school teacher told PressProgress, “art is in the eye of the beholder.”

“If someone has a napkin and fixes it up a certain way and they find it to be emotionally evoking, then that to them would be art,” adding his comments about Super Columbine Massacre RPG were meant in a “liberal sense like that.” 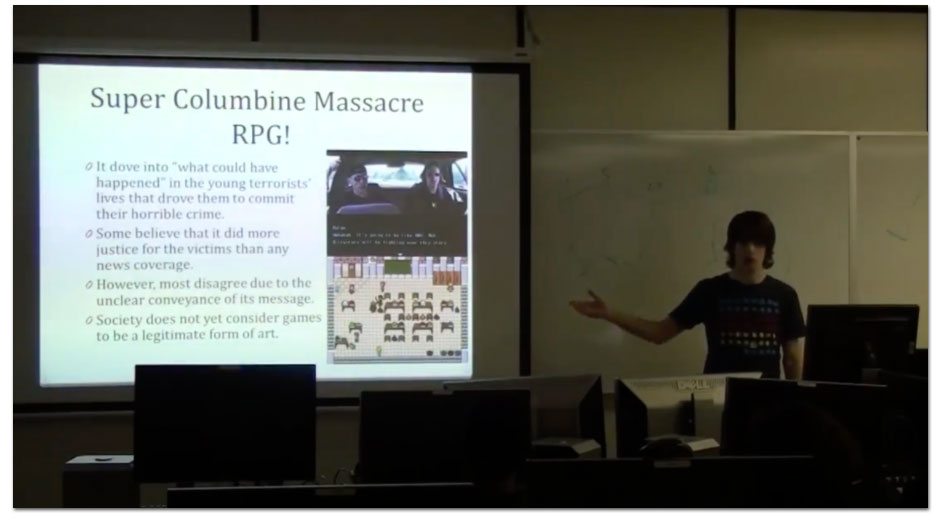 Greco ended his presentation by acknowledging “Happy Culture Shootout” may have been a “mistake” — but he’d do it again.

“If I could go back in time to prevent myself from making Happy Culture Shootout, I wouldn’t,” Greco says. “Mistakes help you grow to be a better person.”

Today, the People’s Party candidate says he stands behind that statement and is taken aback by suggestions his video game points to extreme or far-right views.

“I don’t see any kind of right-wing or far-right-wing or extremist views from that because you’re trying to unite humanity,” Greco told PressProgress.

But outside of the game, Greco has posted statements on social media that appear to echo far-right talking points, even after becoming a high school teacher.

In 2017, Greco posted a photo on Facebook of an illustration of Pepe the Frog which he said was drawn by students on the white board of his York Region high school classroom.

The Anti-Defamation League and Southern Poverty Law Centre both note Pepe the Frog has associations with the alt-right, which appropriated it as a symbol. The photo also includes references to a fictional country associated with alt-right trolls and gamer slang often associated with a slur towards people with autism. 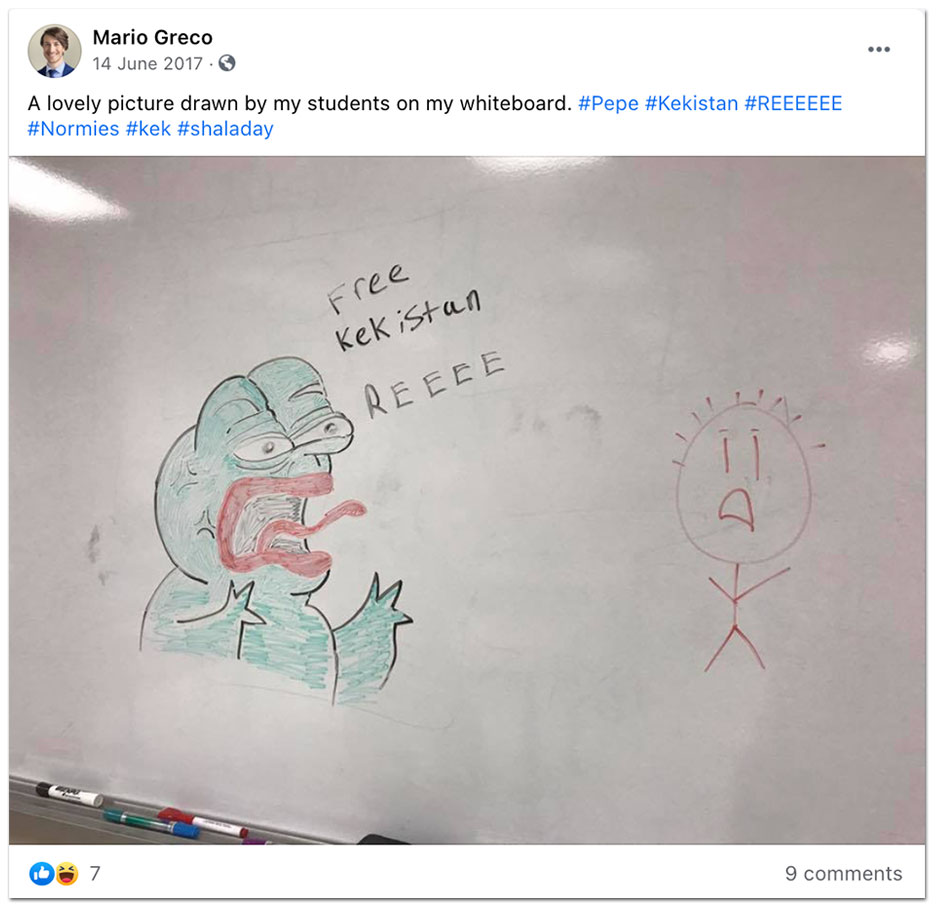 “To have a teacher that clearly has not discouraged students from sharing a meme that makes fun of people with autism spectrum disorder, and the frog and Kekistan thing, all of which are references from 4Chan and about the alt-right, is fairly concerning,” Balgord told PressProgress.

Greco’s social media postings and video game themes point to someone who is “soaked in memes and irony,” Balgord said.

“His defence of shooting things at people with these racial stereotypes is that instead he’s teleporting them away to a happy place — so he’s segregating them? That’s his defence? It’s not murder, I’m just sending them away?”

“Even if you take it on face value, that’s not good. And then on top of that, I’m just not buying it.”

The People’s Party candidate told PressProgress people can think whatever they want of him: “If anyone asks me ‘are you this or are you that’, I’d ask them: What do you think? Who do you think I am?”

“Just like how people would judge a piece of art, people can judge a person too the same way.”