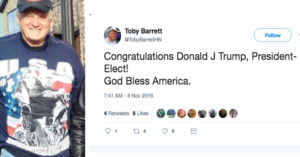 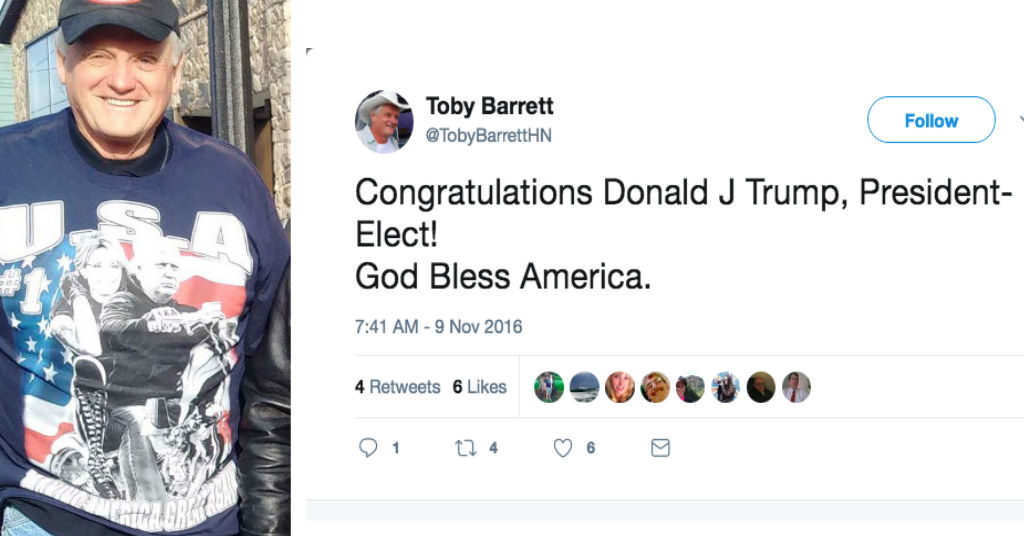 Is the Ontario PC Party now modelling its policies on Donald Trump’s?

It certainly looks that way…

Just ask Toby Barrett, the long-serving PC incumbent currently running for re-election in Haldimand-Norfolk, who has offered fair amount of praise for Trump and his policies over the past year or so.

In 2017, Barrett told his local paper the Simcoe Reformer:

“I have a lot of respect for [Trump’s] taxation policy – cutting taxes on income and for companies. That’s where I come from as a Progressive Conservative.”

In June of that year, Barrett wrote a blog post favourable to the Trump administration’s tax policies and its various attacks on both environmental and labour regulations:

“US-Canada policies are going in opposite directions – minimum wage, for example – and will drastically affect the competitiveness of Ontario’s manufacturers. Billed by the White House as the most ambitious attack on red tape since the Reagan era, Donald Trump is cutting business regulation and capping the total cost of new rules. He has signed an order calling ‘one in, two out’ for each new regulation proposed by an agency such as the Environmental Protection Agency or the Labor Department – the same department will need to identify two existing regulations to be scrapped.”

Barrett then argued that Canada and Ontario should “up their games” (meaning, presumably, that both should model their policies on Donald Trump’s).

And just this week, citing Trump again, Barrett made the exact same argument:

While Trump billed his tax cuts as “a miracle for the middle class” and even claimed “the rich will not be gaining at all with this plan”, an analysis conducted by the Washington-based Tax Policy Center concluded that the biggest winners will actually be the wealthiest 1% of earners while the bottom 95% will get a tax cut of just 0.5 %to 1.2%.

Trump’s tax cuts for corporations and small businesses, meanwhile, will “reduce federal revenue by $2.6 trillion over a decade and largely benefit high-income taxpayers.”

Last week Ontario PC leader Doug Ford unveiled a new plank of his own tax-cutting agenda, similarly branding it as relief for the “middle class.”

But a closer look quickly reveals that something like the opposite is true: in fact, just like the Trump tax cuts, Ford’s $2.3 billion proposal would benefit the richest 10% of earners the most and leave the working and middle classes out to dry – the average savings for those with incomes below $49,000 being just $7 a year.

(Ford’s plan to help minimum wage earners, meanwhile, would leave them more than a thousand dollars a year poorer.)

Just months after Trump’s election, Barrett raised the ire of constituents by showing up to a community festival sporting a t-shirt that featured both Trump and former Republican Vice-Presidential candidate Sarah Palin.

Asked by the Simcoe Reformer if he was a supporter of Trump, Barrett replied “Not even close.”

In the same interview, Barrett would go on to praise Trump’s tax policies.