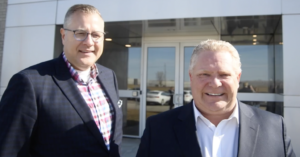 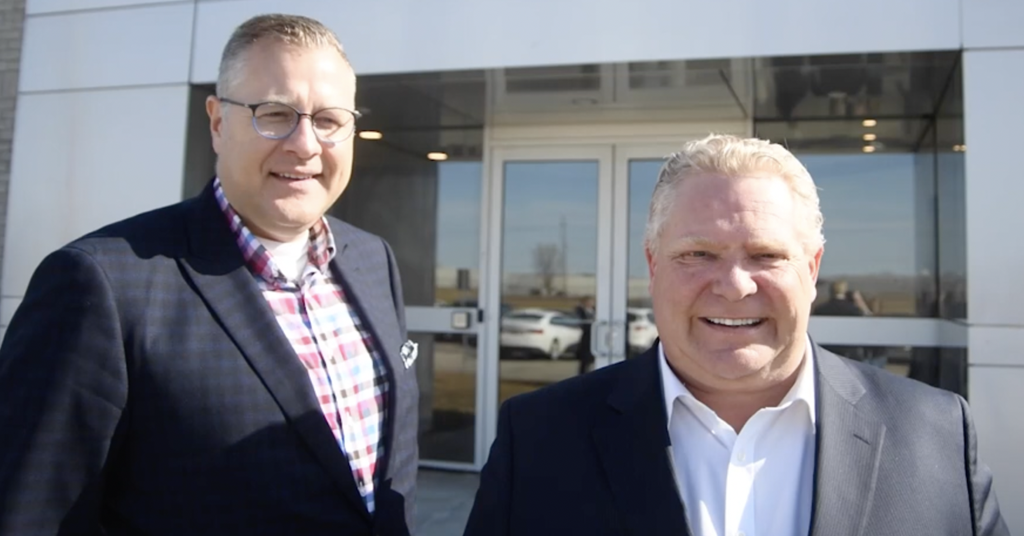 This article is more than 6 months old
New

Ontario PC candidate Will Bouma headed a religious “youth and education committee” that published a magazine for kids that called on its young readers to reject the “homosexual lifestyle.”

Bouma, who previously served as Doug Ford’s parliamentary secretary and the assistant to the Finance Minister, sat on the executive of the Church’s “Free Reformed Missions International” from 2011 until 2017,  just before he sought the Ontario PC nomination in Brantford–Brant.

According to the church’s own documents, Bouma also helped lead the Free Reformed Churches of North America’s “Youth and Education Committee” during this time.

Both organizations have troubling anti-LGBTQ associations.

For example, while Bouma held senior roles in the organization, it adopted a formal “position on homosexuality” that argued it was “evident in the destruction of Sodom” that “God condemns homosexuality.” The organization added that “God’s condemnation extends to all homosexual desires and acts” and that even “spontaneous attractions or perceived sexual orientation in any way contrary to God’s word are sinful.”

The policy further claimed LGBTQ people – as well as others who “practice fornication” or “adultery” – would face judgment on “the day of His wrath.”

“Unrepentant sinners, including those who practice fornication, adultery, and homosexuality, have no place in God’s kingdom … All who refuse to repent will face the righteous judgment of God on the day of His wrath.”

A spokesperson for the  Free Reformed Churches of North America confirmed the denomination has not changed its views.

“Will is a fantastic guy and he believes what the bible teaches,” corresponding clerk Jerry Benjamins told PressProgress. “Will is as much a member of our denomination as I am.”

While Bouma headed the committee, it published a “Youth Messenger Magazine,” a magazine that offers youth advice on a variety of issues.

The Youth Messenger notes that this “semi-annual publication for youth is under the direction of the Youth and Education Committee of the Free Reformed Churches of North America.” 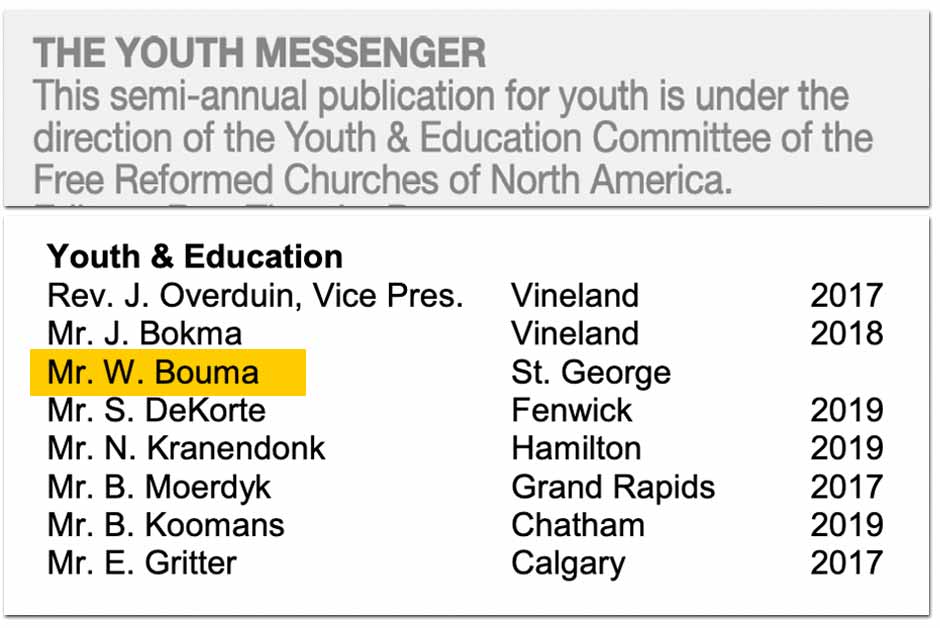 “What was published in the Youth Messenger and on our site is in fact what our church believes and what we teach,” Benjamins noted.

Among other things, past Youth Messenger articles found in the magazine’s archives advised youths to reject the “homosexual lifestyle”:

“Canadians are used to more people ‘coming out’, diversity training in many workplaces, business people being charged with hate crimes when they had conscientious objections to serve such persons, and children being introduced to this lifestyle as natural in the public school curriculum. Public officials who engage in this lifestyle no longer hide it, so that Canada’s largest province, Ontario, has a premier who at times appears in public with her same-sex partner. At first, Canadians were dismayed, vexed and sad, but we are in danger of accepting this state of affairs as normal. However, truly biblical Christians will keep on mourning this situation because a homosexual lifestyle directly opposes the monogamous relationship of the male / female marriage order created by God. We will also be concerned about our attitude to relations with people we meet who practice this lifestyle.” 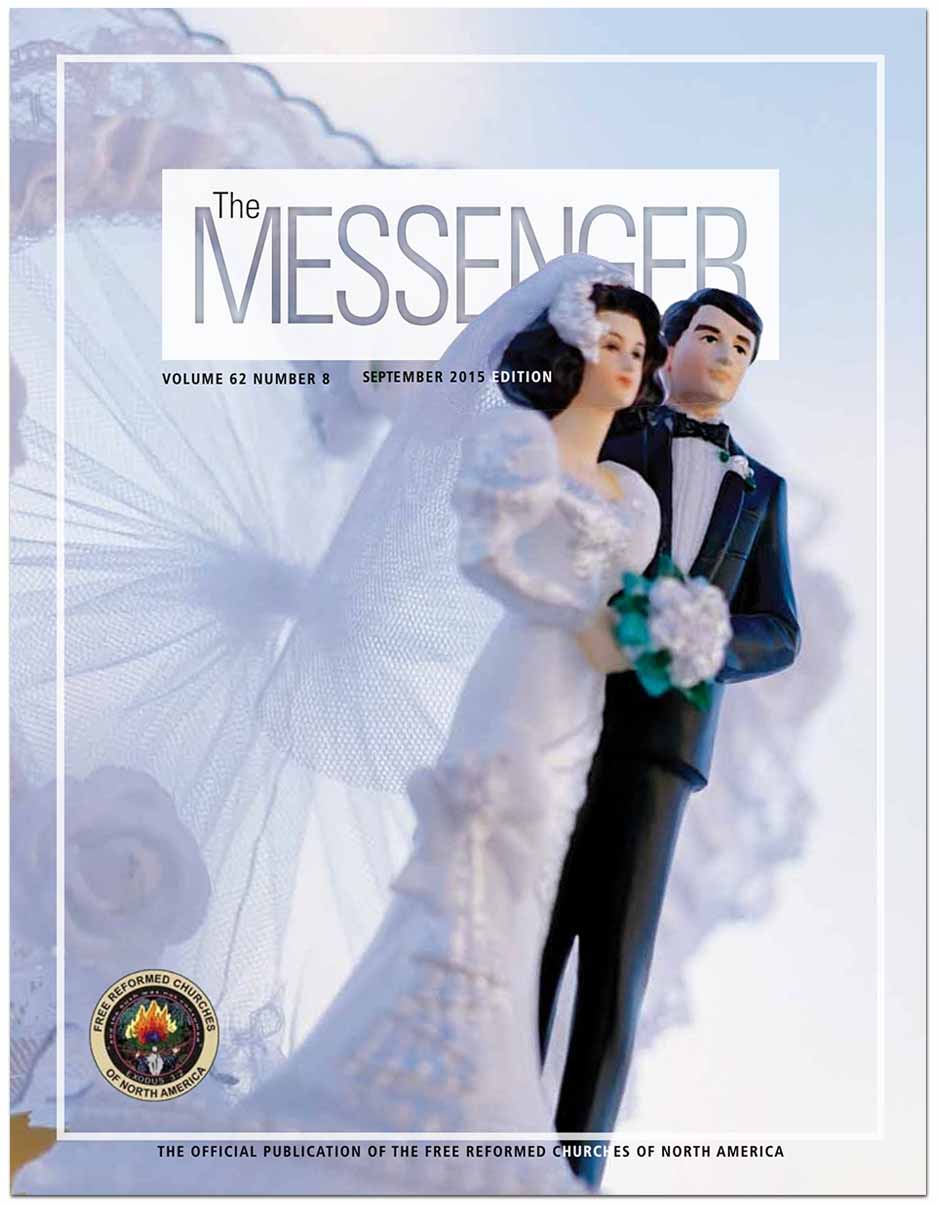 The magazine also claimed that people become gay because they suffered from drug addictions or “love-starved” upbringings as children:

“Those of us who are raised in a church where homosexuality has always been considered a sin, even a grievous one, probably are more aware of the militant and strident homosexuals who publicly flaunt their lifestyle as in Gay Pride parades, or suffer from HIV, STDs and addictions. Then there are those in the church whom we didn’t know what to do with–those who for one reason or another have adopted or fallen into such a lifestyle, perhaps the result of an abusive and love-starved upbringing, or due to experimenting with same sex relationships, drug abuse and other causes.”

The Ontario PC candidate’s magazine’s warnings about “the works of the flesh” also go beyond homosexuality.

In its Spring 2014 edition, the magazine warned youths that  “adultery, fornication, uncleanness and lasciviousness” are on the same level as “idolatry and witchcraft,” as they all represents “perversions of the love of God”: 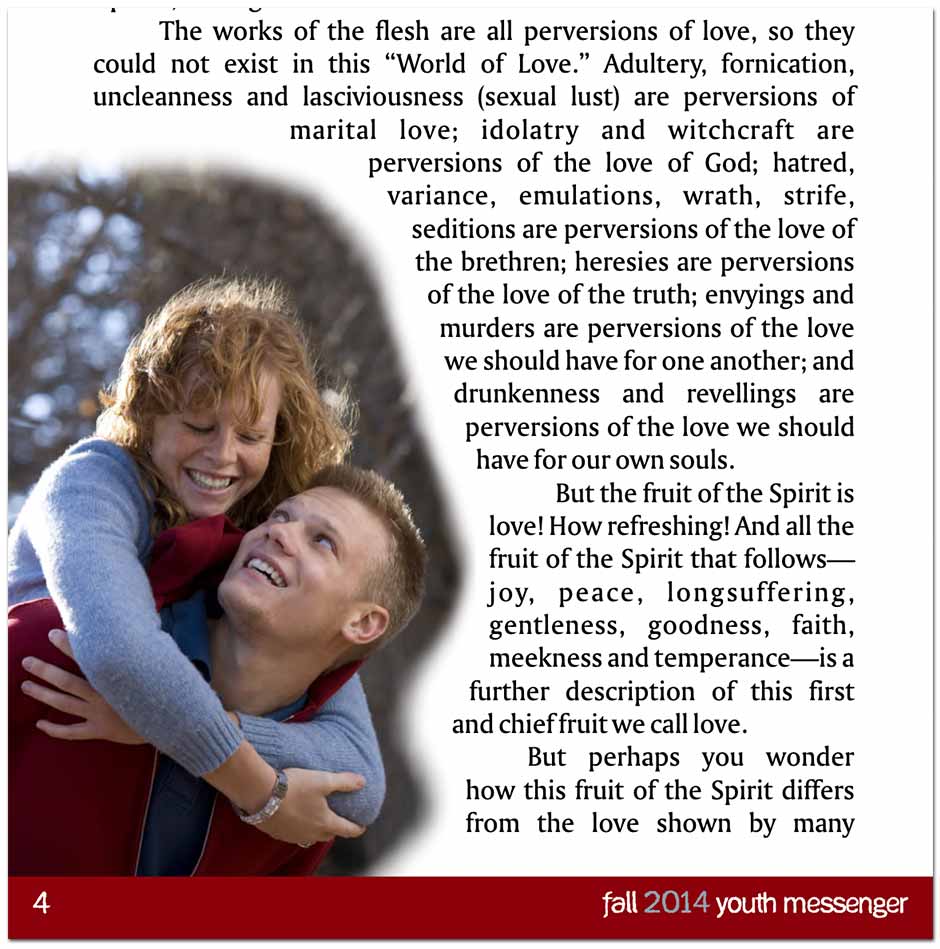 According to retired Reverend Cornelius Pronk, the Youth and Education Committee aims to help young people “deal with their issues,” specifically “how young people should live in this world.”

To this end, Pronk explained, the committee publishes the “Youth Messenger Magazine,” a magazine that “advises” youth on a variety of issues – including sexuality.

“We have very strict principles and so we are not always in support of what the outside world practices,” Pronk told PressProgress.

“Homosexuals, according to scripture, practice sodomy,” Pronk explained. “The committee gives guidance on this and if we see problems are emerging, we refer them to the elders of the church and they deal with it.” Pronk further said “the issue of homosexuality is somewhat new in the sense that we did not used to have people like that. Here and there we are beginning to see young people who are influenced by the current culture.”

“We warn them and try to teach them,” Pronk said. “If they are homosexuals we believe it is possible for them to be turned towards what we feel is the biblical way.” Sometimes, he said, this involves referring youth to “outside experts” from “christian counselling.”

In 2009, the Youth Messenger interviewed Rev. Wes Bredenhof in an article on the church’s history. Bredenhof, a former Hamilton resident, now a pastor at a church in Tasmania which has been accused of practicing conversion therapy.

Nick Schiavo, a spokesperson for No Conversion Canada, told PressProgress “coded language such as ‘leaving the homosexual lifestyle’ is based on a false premise and often a smokescreen for this harmful abuse.”

Shiavo said that whole “conversion ‘therapy’ practices often take many names to hide their true intent,” they are “incompatible with the values of equality, safety and freedom and have no place in 2022. There is no excuse – religious or otherwise – for abusing the queer community.”

The Ontario PC party did not respond to requests for comment.

Update: Bouma’s campaign did not respond to multiple requests for comment from PressProgress prior to publication, however, Bouma issued a tweet Wednesday morning responding to this story.

Without directly addressing his role leading the committee that oversaw a magazine that encouraged kids to reject the “homosexual lifestyle,” Bouma said he personally had “no involvement in writing these articles.” Bouma said he supports “the rights of all of my constituents regardless of orientation” and noted that a member of his family is a “member of the LGBTQ community.”

I am a proud, loving, and supportive father to a daughter who is a member of the LGBTQ community – my views are clear, I support the rights of all of my constituents regardless of orientation. I had no involvement in writing these articles.